Ways to Control and Alleviate Resentment and Anger 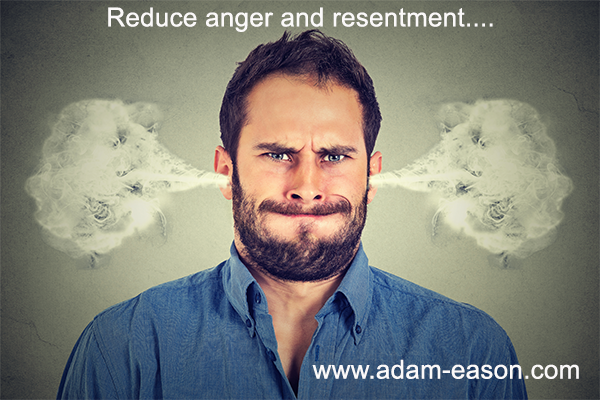 Resentment is something that gets us into so much trouble and for many, especially when it triggers anger, it seems uncontrollable.

Many of us have experienced hard feelings toward others when we fall out with people in our lives. This could happen when someone you worked for fires you, a spouse has cheated on you, or someone close to you is talking behind your back. It is human nature to feel resentment from these experiences, but it is temporary and just a fraction of what damage it causes to us when we hold resentment against those that wronged us.

Anger is like an emotional cancer. It can grow and negatively affect the balance of the mind and body. This, in turn, can cause major issues if not addressed in time.

When you are holding onto resentment toward someone, you may feel angry and anxious. It is very hard to get restful sleep when these negative emotions are consuming your mind and the problematic bi-products are varying.

To let go of resentment, here are some things you can do:

1. We sometimes benefit from knowing the root of the anger that is lodged deep within us. Common roots of anger include fear, pain, and frustration.
For example, some people become angry as a fearful reaction to uncertainty, to fear of losing a job, or to fear of failure. Others become angry when they are hurt in relationships or are caused pain by close friends.
Some example questions to investigate with might be:
• What specifically triggered my anger? Was it words, tone, actions?
• Why do I think I reacted the way I did?
• What were my expectations in all of this?
• Did someone/something not meet my expectations?
• Do I have a right to have expectations?
• Have I been hurt similarly in the past?
And on it goes.

2. One of the first and most liberating steps to changing anything is acceptance – and acceptance is admitting something. Take ownership of your anger and make a commitment to yourself and others impacted by it that you’re going to change.
This is one of the biggest breakthroughs we can experience. Here are some articles to help you with this:

a) Why is self-compassion important? And how to advance it with self-hypnosis.
b) How to Accept and Depend Upon Yourself – Because “No-One Is Coming!”
c) Self-Acceptance With Self-Hypnosis.

3. Buy yourself some time. An outburst of rage can be over before it’s too late, so this is why stopping ourselves at the moment is crucial to avoid causing hurt in another, but also ourselves.
“There were two ways to be happy: improve your reality, or lower your expectations” ― Jodi Picoult.

We’ve all got the ability to be mindful of the words and tone we’re using. We think anger happens immediately without warning, but that’s something many fall back on as an excuse to cover up for their actions.
Whenever you feel your blood boiling and your stomach knotting – take yourself away from the situation and cool down. Be honest with whoever it is and tell them you need to grab some time alone for a little while.   Count to ten, do some breathing exercises, do whatever you can to buy yourself to time for the anger or resentment to dissipate so that you can respond in a more useful way.

4. We’re all entitled to voice our opinion and concerns, but it’s how we do it that matters. Plus, you’re likely to get taken more seriously if you talk about your concerns without the need to shout. People respect your opinion more.
This also isn’t an excuse to sound off at them in a politer way, either. And refrain from using passive-aggressive language too, as a direct insult is less offending than that. It’s a sneaky, cold, malicious way of hurting someone in a non-direct way making out you’re being sincere.

Let them say their piece, then you say yours. Be clear and concise in your language, and be assertive rather than aggressive if the conversation needs to go down that route.

5. Exercise a great stress reliever. Feeling annoyed? Go for a run, hit the weights, or take your feelings out on a punching bag for a while. Looking at anger on a very basic level, it’s really straightforward. Get your endorphins racing and feel good!

6. The body, mind, and soul love laughter. Just look at how it makes you feel.

Love and laughter feel very different in your body and can help counteract and displace fear and anger. Again; see the difference in how you feel with both. Be around those who you can have fun with – especially those who make you laugh.
Stick on that comedy special or movie you’ve seen a thousand times already that you know you love. It doesn’t matter how many times you’ve seen it if it’s a tried and tested method of making you laugh.

The more you’re laughing, the further away you are from anger. Read this article for more on that.
a) The Science of Laughter: Why Laughing is Really Good for Your Health.

7. Any resentment and grudges you hold are only harming you, and not whoever it is you hold them against. You’re the one containing the venom inside, allowing it to circulate around your bloodstream.
‘‘There are no justified resentments” – Wayne Dyer.

You’re also allowing whoever or whatever it is, to live rent-free in your mind. Think of that way.

8. Stop suppressing anger and resentment. When we’re suffering, we sometimes bottle it up and suppress it inside. We might touch on things with close family and friends on occasion, but by and large, we don’t get into the real nitty-gritty of what’s going on within.
Talk to someone openly and honestly about your anger. Lay it all out on the table and get some feedback from them. Genuine people like to lend an ear when it matters most, but be mindful to not use them as a verbal sounding off the board to rant at.
Come from the heart; ask them their opinion on whatever it is that is causing your anger to flare up. Listen to their words.

Being confident in sharing your vulnerable side shows a distinct level of self-love.

You can do this one at the moment, and the amazing thing is that as you change internally, the person you are next to will change too. Seriously, if you put up your dukes, that other person will too. If you open your heart, they will too!
Suppressing anger is rarely a good thing to be honest. Gritting your teeth and holding it down does, however, work. It works but is a bad idea. The more you fight your emotions, the stronger they get.

In studies, when experimental subjects are told about an unhappy event, but told to repress those feelings as much as possible, they end up feeling worse than people who are informed of the event, but given no instructions about how to feel.
When try to hold back anger and resentment, it also negatively effects your ability to experience positive feelings. Your stress levels raise greatly and your amygdala (a part of the brain closely associated with emotions) goes into overdrive (Goldin, McRae, Ramel, & Gross, 2008; Gross, 1998a; Gross & Levenson, 1993, 1997; Stepper & Strack, 1993; Strack, Martin, & Stepper, 1988).

Just as I wrote about a few weeks back when writing about decision fatigue, fighting your feelings consume a lot of willpower. This results in you having less control afterwards which typically leads to you doing things you’ll regret later.
You are probably now thinking “therefore, I need to vent and get it all out, right?”

9. Don’t necessarily vent your resentment and anger.
Venting actually intensifies emotions too. Ultimately, you are focusing more on that particular emotion when you vent. Sharing constructively as mentioned in a previous point can be a good thing, but letting it all out creates momentum for your anger.
10. Consider distracting yourself. The truth is that your brain, as amazing as it is, has limited resources and thinking about something else means you have less brainpower to focus on the negative stuff. The research tends to suggest that it is because both cognitive tasks and emotional responses use pretty much the same limited mental resources; those that you use distracting yourself with a cognitive task of some sort, for example, are now no longer available for your emotional process (Baddeley, 2007; Siemer, 2005; Van Dillen & Koole, 2007)… There has been research that has shown the value of doing math equations to reduce negative feelings (Van Dillen & Koole, 2007) or playing a game of Tetris to do the same ( Holmes, James, Coode-Bate, & Deeprose , 2008) and myself, I play Wordscapes on my phone!

It is sometimes difficult to distract ourselves when we are reacting with anger or resentment, so there is also something else very useful that is backed by neuroscience…..

11. Learn to reappraise.
Someone made you mad at them for whatever reason and you are erupting with anger and resentment, but what if you found out their spouse had just been diagnosed with a terminal illness? Or that they had just lost their job? Or had a family bereavement? Or all manner of other things…… The chances are, you are likely to let it go and perhaps respond in a more understanding and compassionate way.

The situation, the circumstance, the scenario is still exactly the same, but your own narrative about it has changed, your own frame dictating your responses has changed.
Research on reappraisal shows that when you are responding to someone with anger or resentment, then a good way to reappraise and reframe the situation is to think….

“It’s not about me. They must be having a bad day.”

When you change your perception and subsequently your beliefs about the situation, your brain changes the emotions you feel and your amygdala does not get overworked like it does when you suppress (Goldin et al., 2008; Kanske, Heissler, Schonfelder, Bongers, & Wessa, 2011; Ochsner & Gross, 2008; Ochsner et al., 2004).   A major additional benefit is that this process of reappraisal results not just in your anger and resentment decreasing, but also raises your good feelings (Gross, 1998a; Feinberg, Willer, Antonenko, & John, 2012; Lieberman, Inagaki, Tabibnia, & Crockett, 2011; Ray, McRae, Ochsner, & Gross, 2010; Szasz, Szentagotai, & Hofmann, 2011; Wolgast, Lundh, & Viborg, 2011).

12. Finally, and I’m sure you knew I was going to say this, use self-hypnosis to reduce anger and resentment. Follow the links at the foot of this page and these articles will help you learn how to use it directly to help reduce anger:
a) Using Hypnosis To Let Go Of Anger: With A Clenched Fist?!
b) Staring At The TV To Eliminate Anger With Self-Hypnosis?

Happy days, enjoy applying these strategies and notice how much it will improve things for you.

Likewise, if you’d like to learn more about self-hypnosis, understand the evidence based principles of it from a scientific perspective and learn how to apply it to many areas of your life while having fun and in a safe environment and have the opportunity to test everything you learn, then come and join me for my one day seminar which does all that and more, have a read here: The Science of Self-Hypnosis Seminar. Alternatively, go grab a copy of my Science of self-hypnosis book, it’ll help reduce anger!