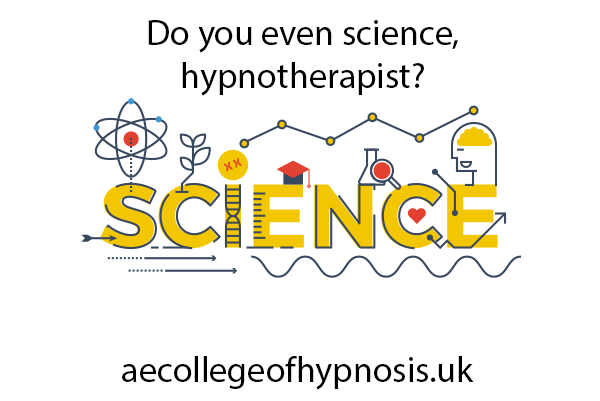 As has been stated on my college hypnotherapy facebook forum numerous times before, the two are not and should not be portrayed as being mutually exclusive.

As someone who champions science and evidence based hypnotherapy and an advocate of healthy scepticism, I promote the notion of critical thinking in this field. Many suggest to me that critical thinking is flawed and we are less creative as a result – I disagree and think it is more creative to consider a wider range of choices and look at information in more depth, etc.

Those favouring science and evidence base are often portrayed in a very particular way that I think is inaccurate.

So a while back when one of the updates on the brilliant XKCD website, touched upon this in such a funny way, I had to share it, I think it sums things up perfectly, and I’d share it with you all here too….

Among the comments, I also wrote the following:

Hull (1933) stated that research on hypnosis is complicated by:

“…. the inherent difficulty of the problems involved, the fundamental elusiveness of the phenomena, and the consequent subtlety in the experimental controls. These difficulties are so great that to enter seriously on a program of investigation in this field…. is almost to court disaster.” (p. 403)

He still had a blimmin’ good go though did Clark Hull. And I love and massively respect those who have attempted to evade scientific disaster, carefully employ adequate controls and study the potential of hypnosis often in the absence of a solid definition.

Without doubt it is no mean feat attempting to apply scientific rigour to the study of hypnosis. The same is true of the field of psychology in general, not just us hypnosis professionals out on the fringes of the psychology fields.

“Psychology is a trickier field, in which even outstanding authorities have been known to run in circles, ‘describing things which everyone knows in language which no one understands.” — Raymond Cattell

It is important to understand that psychology itself is (considered by many) a science that studies the human mind and behaviour. Scientific methods are procedures that involve systematic observations, experiments and testing of hypotheses to understand how the world works. It is a logical approach that scientists use to prove or reject a claim. There have been plenty of debates about whether scientific methods should be conducted in Psychology or not. Some psychologists create their own theories mostly based on obvious (to them perhaps) assumptions and observations of reccurring events and even upon their own professional experience. While on the other hand, there are psychologists who believe that type of methodology to be wrong and prefer using scientific methods to seek out the underlying reason for behaviors. It is near impossible for either ways to be 100% correct but you can take measures to draw more accurate conclusions with the use of scientific methods.

We usually depend upon our common sense to understand why people behave the way they do and we tend to think that the reasons for people’s behaviours are very obvious when in fact it is not necessarily so.

Using common sense to learn about psychology is a widespread mistake that people make and is less likely give you accurate conclusions. Different people have different intuitions and views usually born out of varying life experiences and perspectives, so depending on them will only lead to psychology being more of a subjective matter which many question and some consider to be the wrong approach.

The question is, why do we resort to intuition to make assumptions about human behaviour?

The reason is because we often believe what we see; but sometimes appearances can be deceiving. An example of this is that the Earth looks flat to us and thus, could lead us to believing it in fact is, but science has proved that statement wrong. Though the message and proof has not reached some ardent flat-earthers! The field of hypnotherapy has a great many equivalents to such flat-earters; those who still claim hypnosis is an alltered state of consciousness, those who still explain hypnosis as something to do with the conscious/subconscious mind, those who only ever teach one singular model of hypnosis, those who do not offer up a critique of the approach they favour and teach.

This is why it is important to incorporate scientific thinking in psychology studies because it is far more reliable than merely basing it on people’s gut-feelings. (I’ve written about this topic in detail before here: Are Your Gut Feelings Actually An All Seeing Eye? A Demi God Of Some Sort?)

One thing to remember is that people’s minds are forever changing so making a theory based on observations of behaviour and intuition can be pointless. Two different people with the same mental illness may show symptoms in different ways, so seeking out the fundamental ways the illness can be aided through scientific methods can be proven to be more helpful, though of course is not universally the same for everyone.

Nevertheless, common sense is not always wrong but you have to be aware of your naïve nature, your own bias and decide whether to trust your thinking in certain situations or not. Using science, you will be able to carry out studies that prove an intuition wrong or right using a much more accurate approach. More on our own cognitive bias here: Another Scientific Reason For Hypnotherapists to Abandon the Myth of the Unconscious Mind – Cognitive Bias.

Why is the scientific approach so important?

Scientific theories are the basis of science and offer the researchers a direction to work towards when looking for explanations. Most psychologists were guided by scientific methods before conducting their research in order to help them find their answers because psychology is very complex and requires an extensive knowledge on that topic which is why any study firstly requires a review of the existing literature.

Many popular psychology (as in “pop-psychology”) researchers and authors don’t take scientific methods as seriously as they perhaps should and this results in huge flaws in their practices, teachings and methods. In the field of hypnosis and hypnotherapy, the constant rehashing and revamping of the same materials, lacking in solid evidence is partly what keeps the frontline field so absolutely out on the fringes of credible psychology.

It is said that the scientific method is a very uniform way of collecting data, interpreting outcomes, creating theories, etc. But you have to meet certain standards in order to be able to say that the research is scientific. Firstly, the research must provide the same results when repeated over and over again in order for it to be considered true or even accurate. Secondly, psychologists must form a detailed and exact hypothesis of what they believe will happen given certain situations and they must carry out tests to support or disprove their hypothesis.

Thirdly, a standard theory is one that can be argued wrong with strong evidence in order to avoid confirmation bias. Lastly, researchers should provide simple justifications for their conclusions so that it is easy for the majority to understand. Looking at these important standards you can already see that scientific methods provide guidelines to ensure that the information going out in to the world is as precise as possible and safe for naïve thinkers by allowing room for rejection.

One major reason for opting for scientific methods is because these methods are usually free from personal or emotional bias. Any psychologist, hypnotherapist or psychotherapist exclusively using their personal experiences to reach an outcome and by focusing on what they already believe, are running the risk of blinding themselves to other possible outcomes. It is completely normal to have personal bias because this arises from personal beliefs and cultural beliefs which everyone has. For example, a religious person may not believe in Charles Darwin’s theory of Evolution because of their own religious beliefs. So, when conducting research, they will only look for information opposing the theory and overlook the ones supporting it. This is also known as confirmation bias which many lay-researchers are disposed to, and this leads to a false understanding of their research. This can be avoided by following scientific methods. This is because when collecting and analysing data respecting the scientific method, there are specific rules to follow that eliminate any room for bias. They make the outcomes more objective rather than subjective by putting proven facts alongside the conclusions.

Researchers are said to feel more confident using these methods because they believe they escaped any personal influence and only stuck to the facts. Of course, this does not mean that the research is free of errors. There may still be errors but you can rest easy knowing bias is unlikely to be one of them.

Overall, it is safe to say that scientific methods are far more reliable and provide scope to grow and expand researcher’s knowledge. They aim to reduce errors and bias from results and create more sensible information for the general public. Psychology without scientific methods would merely just be opinions.

This morning on social media, I posted a couple of related articles that I think will help expand on some of the themes here, have a read:

This is just a simple, basic, entry level explanation that I’ve attempted to put in simplistic terms and not assume everyone reading it is going to understand some of the fundamentals of science in psychology. Which brings me on to the field of hypnotherapy. It has been my experience over the past two decades that hypnotherapy training is filled with anecdotal accounts from trainers explaining methodologies, filled with intangible facets, lacking in strong adherence to evidence base and very rarely with any attempt to create familiarity with the literature supporting the field, the major contributory academic authors, theoreticians and underpinning notions that fuel and feed the practical skillset.

We need science. We need to be understanding the importance of evidence base. We need this hypnotherapists. We need to at least be aware of this and let it inform our stance and position.

1. Would you like a satisfying and meaningful career as a hypnotherapist helping others? Are you a hypnotherapist looking for stimulating and career enhancing continued professional development and advanced studies?
Adam Eason’s Anglo European training college.
2. Are you a hypnotherapist looking to fulfil your ambitions or advance your career?
Hypnotherapist Mentoring with Adam Eason.
3. Likewise, if you’d like to learn more about self-hypnosis, understand the evidence based principles of it from a scientific perspective and learn how to apply it to many areas of your life while having fun and in a safe environment and have the opportunity to test everything you learn, then come and join me for my one day seminar which does all that and more, have a read here: The Science of Self-Hypnosis Seminar. Alternatively, go grab a copy of my Science of self-hypnosis book.