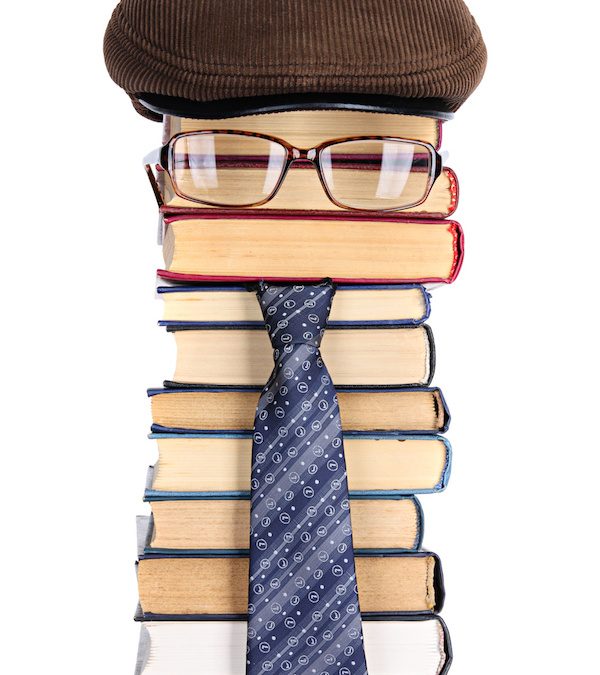 A wee while back, one of the guests on my podcast started a thread in a forum he runs at Facebook about his interview and discussion with me on my Hypnosis Weekly podcast. People discussed his views, his stance and those who had tuned in gave feedback and so on, as typically happens (one of the podcast’s aims is to stimulate debate, after all).

Another former guest to have featured on the podcast wrote the following comment on the thread once he had listened to the episode (please note, this is just a single sentence lifted from a very positive, fuller review):

“I enjoyed hearing you give ‘evidence based’ a good hard slapping and for all the correct reasons. I could almost feel Adam twitch as I know this is a thing of his?”

Hahahaha, this is very observant, I do often have to conceal the fact that I’d love to interject and refute elements of what my guests say, because I do have major differences with them on occasion, however, each episode is not about me, it is about my guests and about me allowing them to have their say, and also a major theme of the podcast is to embrace the diversity. I don’t think anyone would wish to be a guest on my hypnosis weekly podcast if all I did was highlight major flaws in things they have said according to what evidence suggests.

The comment had no ill-intention behind it as far as I was concerned but illustrates something that I feel strongly about within the field of hypnosis and hypnotherapy. Let me start to explain….

I posted this image and quote from Issac Asimov (whose books I love) on my business Facebook page back in January this year: 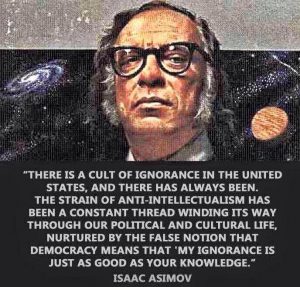 When I posted it, I also added these words:
Exchange the word “United States” for “field of hypnotherapy” in this Asimov quote – then visit popular hypnosis forums and experience for yourself how averse the majority of front line Hypnotherapists are to evidence base and responsibly researched due diligence when it comes to what they do.

This very week then, I had my eye caught by this utterly brilliant video clip featuring Barrack Obama that is doing the rounds of the internet and is entitled “Ignorance is not a virtue!” I’d love you to listen to these soundbites from that speech as they really articulate my own feelings with regards to the field of hypnotherapy, whereas Obama is referring to politicians and global impact of such mindsets:

To echo those opening words of Barrack Obama; “Facts, evidence, reason, logic, and understanding of science, these are qualities you want in” I would then interject and add my own completion of this sentence by adding the word “hypnotherapists.”

There is a fair amount of anti-intellectualism and sneering at evidence-based approaches within the field of hypnosis and hypnotherapy and often those who speak up and out against it really offer very weak and implausible arguments against the evidence, like they somehow know far better than researchers about research design, like they know far better than people who have studied at very high level for years and years and made major contributions, breakthroughs and advancements to our field.

Maybe it is just a trend apparent in society in general currently, in the book The Dumbest Generation, author Mark Bauerlein reveals how an entire generation of youth is being dumbed down with a seeming aversion to reading anything of ‘substance’ and an addiction to the drivel poured out via social media. I had better stop sharing Facebook memes here then, ahem…. Yet I think the vast majority of hypnotherapists are of a different generation and we cannot use this as an excuse.

Journalist Charles Pierce, author of Idiot America, suggests the following perspective:
“The rise of idiot America today represents – for profit mainly, but also and more cynically, for political advantage in the pursuit of power – the breakdown of a consensus that the pursuit of knowledge is a good. It also represents the ascendancy of the notion that the people whom we should trust the least are the people who best know what they are talking about. In the new media age, everybody is an expert.”

There is much here that feels relevant to me within the field of hypnotherapy for sure. Many do have a financial interest in ensuring their own perspective is not questioned, for sure. Also the interest that keeps them being a revered expert with elevated status within the field. I mean who would respect those who are shown to be outmoded, outdated and superseded? It is in their interests to keep promoting what they deem to be the right way as the only way….. 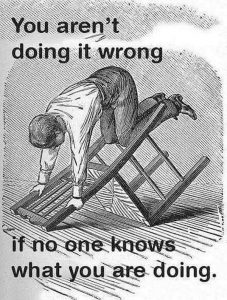 Within the field of hypnotherapy, I often hear the louder dissenting voices claiming that their own purely subjective experience is somehow more correct than the formalised evidence. Often I hear that the results are all that matter, getting therapeutic results. However, understanding precisely how those results were achieved would enable effective measurement and correct replication.

That is the reason that expectation is often measured in hypnosis research for example, because the level of expectation is likely to effect the results that occur. Although the two have strong links, in order to measure the effects of hypnosis,w e have to take into account factors such as levels of expectation and be aware of how that might effect the results. Likewise, a huge number of other factors exist in a therapy room or classroom that have not been extrapolated or examined without bias and so making assumptions about how the results were gained may not be an effective way to teach someone else to get the same results; teaching based upon anecdote and exclusively based upon experience is not necessarily useful and is filled with lots of potential problems. That brings me nicely on to this….

Often I hear that practical skills are far more important than knowledge and academic understanding. In fact, I read recently on a website for a hypnotherapy training school that they do not cover much theory in class because they believe that practical skills are far more important and class should be used that way. They have obviously not noted that all of the most important surgeons, doctors, physicians, psychiatrists and psychologists in the world had to sit in lectures being taught the underpinning theory prior to practical applications.

Glibly referring to certain debates and discussions as ‘merely’ academic is a common thought, yet further evidence tends to suggest that correct understanding improves outcomes with hypnotherapy.

This all seems to make perfect sense to me, so why on earth does it not make sense to large swathes of the field of frontline hypnotherapists? Why is there such a sense of anti-intellectualism and not more adherence to evidence base?

Perhaps it is because so much myth, misconception and misinformation is invested in so heavily in this field and it is then mindlessly regurgitated without applying any critical thinking. Maybe it is because the evidence based message is being dismissed by those regurgitating the myth and misconceptions and their own authority leaves a firm impression upon those who willingly listen. Perhaps it is because it would involve us all having to read much more, research more and explore deeper which does not appeal to those who would rather lazily just do as they were taught. Maybe it is because people do not wish to admit that they do not know best, that it is an incredibly bitter pill to swallow to think that they notions they hold so dear are flawed and anyone suggesting as much deserves to be sneered at.

I listen to a lot of audiobooks. In particular when running and training for running events. I am currently pausing my listening hours of textbooks and study materials and am indulging my love of fantasy novels and epic sci-fi. I am listening to a beautiful and brilliant book called Dawn of Wonder: The Wakening by Jonathan Renshaw and I am in love with it. In chapter 22 a group of boys training at an academy are gossiping and reflecting upon the coming days and a phrase was spoken that rang true with me and with the issues at the heart of this article; “speculation holds more wonder than fact.”

There it was – perhaps a sense of awe-inspiring wonder is causing the anti-intllectualism? Maybe that is it. Maybe the myth and misconception, the speculating about what hypnosis can and cannot do, the allure of the fantastical is why people in these fields reject sobering evidence base. I think they need to consider stopping being so starry eyed for a wee while though, especially if we want to gain credibility as a field. Who knows….

Let’s ensure the field of hypnosis does not turn into a typical US high school 80s movie scenario where the ‘jocks’ athletes and good looking cheerleaders refer to the well-educated as nerds, dweebs or dorks and attempt to belittle, dissociate, mock or angrily silent the voices of those who desire a more thoroughly educated life.  Let’s not let the cult of ignorance and anti-intellectualism soak in to our field for another generation.

Anyhow, thank you President Obama, you proved to be some wonderful tonic to me, I’m going to go and replay that clip again, it feels like smelling salts being wafted under my nose….. Remember “ignorance is not a virtue!” 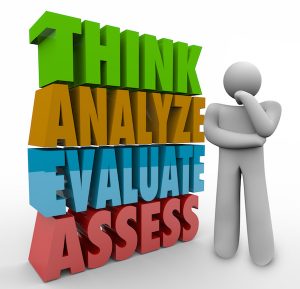