How to feel less isolated and more engaged 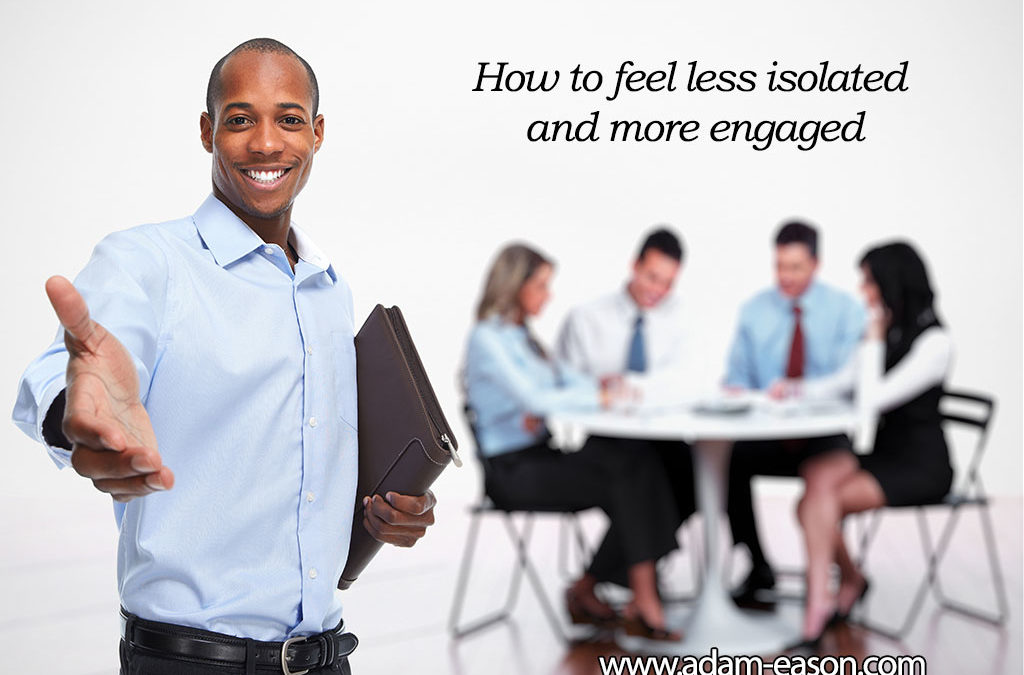 Loneliness is my topic today. Or other, how to experience less loneliness, feel less isolated and feel more of a connection with the world, the people in it and to feel more engaged.

“It would be impossible to estimate how much time and energy we invest in trying to fix, change and deny our emotions – especially the ones that shake us at our very core, like hurt, jealousy, loneliness, shame, rage and grief.” ~ Debbie Ford.

Did you know that loneliness may have similar public health outcomes as diabetes or smoking 15 cigarettes a day?

A wave of expert opinion is building towards the acknowledgement of loneliness as a growing epidemic across a number of societies (Western in particular).  But this is no ordinary epidemic. It’s not biological, it’s socioeconomic and technological. The wealthy are not more protected; in fact, they are more at risk. And although the elderly might be at the highest risk of being lonely, it’s the middle aged that are more likely to die from it according to research.

A recent finding from the survey suggests that loneliness is remarkably prevalent; 43 percent of the 1,600 interviewed reported feeling lonely or experiencing some degree of loneliness.

In early 2018, our Prime Minister here in Britain, Theresa May, announced the creation of a new government role, the Minister of Loneliness. Recognising the growing public health problems associated with loneliness, this Minister’s role is to develop policies to help fellow Brits overcome loneliness.

“A season of loneliness and isolation is when the caterpillar gets its wings. Remember that next time you feel alone.” — Mandy Hale.

Loneliness and social isolation are recognised as public health problems; some have called them epidemics. Why is this important to acknowledge? The effects of loneliness put people who are less socially connected at higher risk of premature death. They’re more likely to experience disrupted sleep patterns, altered immune systems, more inflammation, and higher levels of stress hormones.

Loneliness can accelerate cognitive decline in older adults. To test what we all know anecdotally, the results of a nine-month research trial conducted in care homes in the UK demonstrated that just 10 minutes of one-to-one daily chats improved the well-being of people living with dementia.

Loneliness can have negative health effects similar to those caused by obesity and smoking. And it’s not limited to older adults A Harris poll of American adults conducted in 2016 reported that nearly one third had experienced loneliness at least once a week. A Study by the British Mental Health Foundation found that young adults, ages 18-34, were more likely to experience loneliness than individuals over 55. A breakthrough study in 2015 established clear links between loneliness and public health outcomes. Researchers at Brigham-Young University, conducting a meta-analysis of 70 independent studies from across the world, concluded that loneliness was associated with an increased mortality risk of between 26% and 32%.

“An invisible thread connects those who are destined to meet, regardless or time, place, and circumstance. The thread may stretch or tangle. But it will never break.” — Ancient Chinese Proverb.

Loneliness and the young

Today’s young are the first to grow up in the ‘connected generation’, with multiple modes of live interaction available to them. However, without the maturity to understand and balance the ways in which they interact with others, they are at risk of experiencing emotions and feelings that their parents or careers from older generations may struggle to identify and understand.

Loneliness and the elderly

Those in their later years are at most risk of loneliness. Their children have grown up in a more mobile generation and have moved away, often far away, from their parents. Meanwhile, they have watched physical centres of connection and community gradually decline over the past decades. The population around them has become more transient, connection has become more technology-driven, and greater austerity has squeezed public spending on community enhancing measures.

Modern work, enabled by technology, is fast-paced and demanding. The lines between work and non-work are becoming increasingly blurred, leading to fewer deep friendships outside of the workplace. This is particularly likely to affect those in professional, corporate jobs – a sign that higher socioeconomic groups are particularly susceptible. Indeed, HBRs Snapshot Survey revealed that half of CEOs are experiencing feelings of loneliness in their roles.

A study by Relate, the UK based relationship charity, reported that most workers have much more contact with their boss and colleagues than their own friends or close family.

“You can’t connect the dots looking forward; you can only connect them looking backwards. So you have to trust that the dots will somehow connect in your future. You have to trust in something – your gut, destiny, life, karma, whatever. This approach has never let me down, and it has made all the difference in my life.” — Steve Jobs.

So, how can we combat loneliness?

Whatever way you look at it, whether it’s health outcomes or productivity, increasing loneliness is a massive concern that needs more attention. It’s also a taboo subject. We need to talk about it more.

We all have our part to play in combating this epidemic. Unlike every other epidemic we’ve faced, isolation makes it worse. Medication won’t necessarily help. Lonely people need meaningful and enduring connection.

Loneliness comes in many forms, but hopefully, these points, tips and ideas can ease some of those feelings if you or anyone you know is suffering from the epidemic.

1.      Talk about it. Get it out of hiding. Loneliness is normal, as we all feel lonely from time to time. But when it grows to be an inward, overwhelming force, get it out in the open. Don’t hide. Reach out. Connect with a trusted friend, family member, licensed counsellor, someone who cares – as well as someone YOU can care about, so that you can put the focus on helping others.

2.      Make sure you’re not living your life through a screen… whether it be your phone, TV, or other devices. Refuse to be a voyeur and commentator of others’ lives. Commit yourself to becoming the author of your own, beautiful life story.

• Create fun icebreakers where people get to know each other.

• Take opportunities to talk with colleagues rather than send e-mails when in-person conversation would improve communication.

• Encourage work-life integration (there’s no such thing as a “perfect” balance).

• Get out of your office, get fresh air, and get to know your city. (See my article on how to connect with your city.)

4.      Love your community and give back. Community members working together and watching out for their older neighbours are essential to reducing social isolation. Reach out with some freshly baked cookies or an invitation to join you for a meal. Offer to take someone for a ride to the grocery store or to run errands. Make an occasional call to say hello and check in. Rake leaves, shovel a walkway, help on garbage and recycling day, and spend some time in conversation. Every little touchpoint makes a difference and lets your neighbour know someone cares.

Ask yourself – what are you doing, and what CAN you do, to foster in-person community in your neighbourhood, at work, and among friends who share interests in common.

5.      Connect with nature. Find places in the outdoors and spend time nurturing your soul in nature.

6.      Get exercise. Physical activity contributes to wellness and well-being, the perfect opposite of loneliness.

7. Find a group for like-minded people. There are some fantastic groups out there, filled with hundreds, even thousands of like-minded people, who are helping each other solve problems and offering up their own personal experiences to aid you on your journey.

These groups whether physical or virtual, can offer huge benefits and provide you with a pretty close-knit community for those times of despair. You will be talking with people that truly grasp what you are feeling or going through, and give near priceless advice on how to cope with said issues. You can also gain important feedback and suggestions for your issues, from people who have faced similar experiences.

8. Talk to people you care about. Not everyone will get what you are doing and that is fine, heck it can actually be a breath of fresh air after some long hauls. Sometimes talking to a good friend, family member or partner can be massively helpful in aiding your state of mind

You don’t always need a long, in-depth, intellectual answer to help you, sometimes you just need that human touch.

9. Make a habit of getting better sleep. One of the most common indicators of loneliness is broken sleep — taking a long time to fall asleep, waking frequently, and feeling sleepy during the day. Sleep deprivation, under any circumstances, brings down people’s moods, makes them more likely to get sick, and dampens their energy, so it’s important to tackle this issue. (Here are some tips on getting good sleep.)

10.      Remember, loneliness, struggles and anxiety are not unique to you. You are not alone in your feelings of aloneness. We all face challenges. We all face overwhelming obstacles and problems from time to time.

None of this is simple. Look up from your phone. Take a few steps. Reach out and find friends who care. Connect with and serve your community. Find a cause bigger than your lonely feelings. Tomorrow will be brighter.

“People are lonely because they build walls instead of bridges.” — Joseph F. Newton Men.

Most people have suffered from loneliness at some point. Have you found any good habits for making yourself less lonely? What worked — or didn’t work?

Likewise, if you’d like to learn more about self-hypnosis, understand the evidence based principles of it from a scientific perspective and learn how to apply it to many areas of your life while having fun and in a safe environment and have the opportunity to test everything you learn, then come and join me for my one day seminar which does all that and more, have a read here: The Science of Self-Hypnosis Seminar. Alternatively, go grab a copy of my Science of self-hypnosis book, it’ll help you live a more meaningful life!