How to Debunk Conspiracy Theories 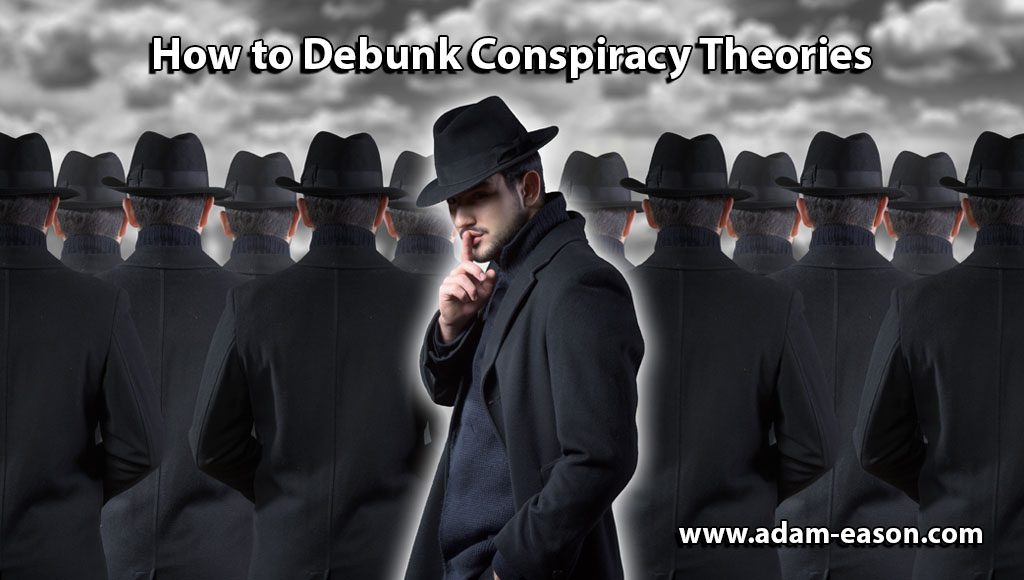 Today, I don my foil cap and talk all things conspiracy theories, and focus on how to debunk them.

“One of the biggest problems with the world today is that we have large groups of people who will accept whatever they hear on the grapevine, just because it suits their worldview – not because it is actually true or because they have evidence to support it. The really striking thing is that it would not take much effort to establish validity in most of these cases…. but people prefer reassurance to research.”

This is so true in the hypnotherapy field. So many want to be reassured that it is the government or big pharma covering up the virtues of hypnotherapy. So many want reassurance that the way they were trained was the best and only way. They want reassurance that many of the myths they perpetuate are true and if someone publicly says something they like, they won’t question it or seek validation.

I recently saw a video of someone suggesting that the NHS here in the UK actually want to hamper the success of hypnotherapists – as stopping people smoking costs the government money. Firstly, there’s no evidence to support that, secondly, surely people stopping smoking would lessen the burden on our health system, keep more people in work and contribute to a healthier, wealthier society.

“It ain’t what you don’t know that gets you into trouble, it’s what you know for sure, that just ain’t so.” — Mark Twain

We are all prone to believing half-truths, forming connections where there are none to be found, or finding importance in political and social events that may not have much significance at all.

Conspiracy theories tend to flourish especially at times of rapid social change, when we are re-evaluating ourselves and, perhaps, facing uncomfortable questions in the process. And it’s not merely that conspiracy theories are thriving — they’re also getting more absurd, less substantive, and harder to refute.

“In a culture fueled by burnout, a culture that has run itself down, our national resilience becomes compromised. And when our collective immune system is weakened, we become more susceptible to viruses that are part of every culture because they’re part of human nature – fear-mongering, scapegoating, conspiracy theories, and demagoguery.” — Arianna Huffington

Why Do Some People Believe in Conspiracy Theories?

Although conspiracy beliefs can occasionally be based on a rational analysis of the evidence, most of the time they are not. As a human, one of our greatest strengths is our ability to find meaningful patterns in things around us and to make causal connections. Research suggests that we have a need for such structure. However, the same research suggests that we sometimes see patterns and causal connections that are not there, especially when we feel that events are beyond our control.

The attractiveness of conspiracy theories may arise from a number of cognitive biases that characterise the way we process information. “Confirmation bias” is the most pervasive cognitive bias and a powerful driver of belief in conspiracies. We all have a natural inclination to give more weight to evidence that supports what we already believe and ignore evidence that contradicts our beliefs. The real-world events that often become the subject of conspiracy theories tend to be intrinsically complex and unclear.

“Proportionality bias” is another driver of conspiracy theories. Our innate tendency to assume that big events have big causes may also explain our tendency to accept conspiracies. This is one reason some people are uncomfortable with the idea that President John F. Kennedy was the victim of a deranged lone gunman and found it easier to accept the theory that he was the victim of a large-scale conspiracy.

Another relevant cognitive bias is “projection.” People who endorse conspiracy theories may be more likely to engage in conspiratorial behaviours themselves, such as spreading rumours or tending to be suspicious of others’ motives. If you would engage in such behaviour, it may seem natural that other people would as well, making conspiracies appear more plausible and widespread. Furthermore, people who are strongly inclined toward conspiratorial thinking will be more likely to endorse mutually contradictory theories.

None of the above indicates that all conspiracy theories are false. Some may indeed turn out to be true. The point is that some individuals may have a tendency to find such theories attractive. They are not really sure what the true explanation of an event is—they are simply certain that the “official story” is a cover-up.

In the hypnosis and hypnotherapy fields, we are considered alternative by some practitioners who share David Avacado Wolf memes and similar, that are often suggesting that “Big Pharma” are trying to obscure hypnotherapy as it will eat into their profits and so on…. But let’s be honest, the continued conspiracy theory behaviour and rhetoric by our field is enough to ensure we are obscured and not treated seriously, without Big Pharma needing to do a thing.

Show them the facts

It’s probably the best way to debunk conspiracy theorists. If someone in your family or social circle is an ongoing fount of conspiracy theories, it’s worthwhile to counter their stories with the truth — which will often be at your fingertips. Just check on our cellphone the story the other people just told you. Use rational strategies in everyday situations. Say something like, “These are the facts, my friend.” The theorist may or may not prove willing to accept reality, but either way, others who are listening will be able to hear evidence against a conspiracy.

Psychologists encourage a patient questioning of the conspiracy’s underpinnings, to “follow that train of thought to its natural conclusion.”

For example, if your friend thinks that there is a vast government conspiracy to keep people smoking and prevent hypnotherapists being so successful, ask a few gentle probing questions: Where are the orders coming from? How is it implemented? Is there evidence that supports this? How much money does the government make from smokers? How much money would the government make if there were less smoking related illnesses being dealt with by our NHS?

1) showing them the facts and

2) implying that anyone who would think otherwise is ridiculous.

This might or might not work—but at least other people within earshot will get some solid facts. So you might not reduce the number of conspiracy theorists or racists in your midst, but you might, at least, stop a new one from forming.

“Conspiracy theories are ways for someone to understand what is going on in the world and try to restore some sense of control in themselves.” ― Oscar Auliq-Ice Junior

And if all else fails? Take a deep breath and walk away. Conspiracy theories are an unfortunate part of our daily life, and the best you can do is keep repeating the truth. On some days, that might make you feel like, well, a member of the select few.

Likewise, if you’d like to learn more about self-hypnosis, understand the evidence based principles of it from a scientific perspective and learn how to apply it to many areas of your life while having fun and in a safe environment and have the opportunity to test everything you learn, then come and join me for my one day seminar which does all that and more, have a read here: The Science of Self-Hypnosis Seminar. Alternatively, go grab a copy of my Science of self-hypnosis book, it’ll help you live with integrity!