Are Politicians Really Using Hypnosis On Us? 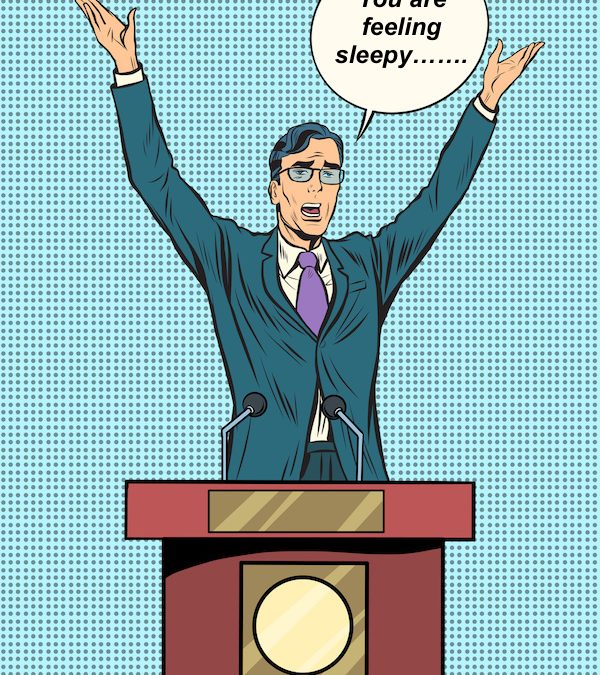 It seems to have become fashionable in the current climate of political fervour around the world, though particularly in the US and UK, for hypnosis professionals and authors to write about how politicians are using mass hypnosis, in particular there is a lot of material written about how Obama is apparently manipulating people and how Donald Trump is doing the same.

Let’s be honest; they’re not.

If you go and google the subject, you’ll see that virtually all of these articles refer to the ways in which the politicians are using language. Particular language patterns are getting pointed out and highlighted; they are mainly indirect, Ericksonian language patterns or those espoused by the field of NLP.

There has been disagreement over the extent to which Erickson’s or the NLP approach can be compared to previous forms of hvpnotism, or even whether it might be better called something else, other than “hypnotism”, to avoid confusion. One of the key difficulties here is that indirect suggestions appear to function by means of a fundamentally different mechanism from traditional hypnotic suggestion. For example, prolific hypnosis researchers and academics Steve J Lynn, Irving Kirsch and Hallquist define hypnotic suggestion as follows:

“Unlike placebos, misleading questions and other forms of indirect suggestion, hypnotic suggestions are requests for imaginative experiences, and for that reason they can also be termed imaginative suggestions.” (Lynn, Kirsch & Hallquist, 2008, p. 112)

By that definition, much of Ericksonian or indirect language usage is clearly not employing hypnosis at all and would perhaps be better labelled “indirect suggestion therapy” (Robertson, 2012).

Many of the articles doing the rounds on the internet currently tend to confuse the public as well as hypnosis students and mislead them about the nature of hypnosis and its role in psychological therapy, often making claims that are completely inconsistent with research in the field of hypnotism. In these articles, it is often suggested that the politicians using these hypnotic language patterns are saying things that are beyond our conscious awareness or circumventing resistance.

Braid’s original definition of hypnotism was in terms of focused (conscious) attention on a particular idea or mental image accompanied by the (conscious) expectation that some response would happen as a result. Only later, did certain authors seek to portray hypnotism, in more obfuscating and mystifying terms, as something to do with “talking to the unconscious mind” of the client.

Consequently, sometimes more evidence-based practitioners are quite concerned that some hypnosis professionals and authors encourage “magical thinking” or surround themselves with mystique by suggesting that hypnosis can be used to manipulate the thoughts of the masses without them really knowing it. This is the stance of some approaches to hypnotherapy but not others. It was, in particular, a criticism levelled against Erickson by Barber. In a symposium discussion of one of Erickson’s papers summarising some aspects of hypnosis research, Barber said:

“It seemed to me that half of Dr. Erickson’s presentation was from the position of a natural scientist, psychologist, and psychiatrist trying to understand what hypnosis is; the other half of the time the presentation seemed to be from the position of someone of many years ago who really thought hypnosis was a mysterious, magical thing. […] the subject goes into a trance, and when he is in a trance, magiclike things happen. It is implied that a kind of mysterious thing happens because of trance.” (Barber, quoted in Erickson, 1980, pp. 333-334)

This quotation is important because it highlights very clearly the fundamental difference in outlook between the Ericksonian tradition in hypnotism and the cognitive-behavioural approach, represented by Barber. The more “common sense” and skeptical cognitive-behavioural perspective is fairly dominant in the current research literature, although many hypnotherapists are still drawn to the Ericksonian approach despite the lack of evidence supporting it. It fascinates, intrigues and suggests that hypnotic changes can be made by wielding language in a particular way, and article authors are suggesting that politicians have learned how to use these mysterious hypnotic communication tools to influence voters. Suggestion can indeed create change without hypnosis at all; everything that can be done with hypnosis can be done without hypnosis, but if it is just suggestion, why state that people are being hypnotised?

Evidence suggests that hypnosis is actually collaborative. It requires the recipient or subject to engage in it, not be a passive recipient of it. It is not something that just gets wielded upon people. Hypnosis depends more on the efforts and abilities of the subject than on the skill of the hypnotist (Hilgard, 1965).

I have a book of classic and brilliant speeches from throughout history, and when you pick away at the transcripts, you can see that a number of language patterns could be highlighted at times. That said, the field of NLP had not even been created at that time. Remember, NLP does tend to model what others do well.

Politicians continue to invest money in delivering their messages in the hope and with the aim that we absorb the information and subsequently have our allegiance influenced. They want us to accept their message rather than others and to make a vote for them instead of their rivals. They want us to feel like life is going to be better if we vote for them, they want their message to appear more attractive and so on and so on… Political messages and rhetoric are everywhere and anywhere. Are they actually anything to do with hypnosis as numerous authors have been suggesting?

It is clear for anyone to see that politicians do utilise a range of suggestive techniques to attempt to influence you. On occasions, politicians employ techniques whereby they want you to identify with their values, their message and suggest that you and your loved ones will be better off as a result of them running things.

These politicians will even then tell you what a brilliant, informed and intelligent choice you made by choosing them, they may remind you of how wise you are for having made this choice, and how better your life (and the life of your family) will be now that you chose them. They may attempt to make you feel better informed, clever, enlightened, responsible or whatever it takes for you to plant your flag in the ground beside them. 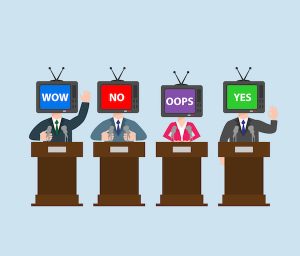 The point that I am making here is that many people do draw parallels with the field of hypnosis because politicians uses words and images in a way that is intended to influence your behaviour and influence the way you vote.It is therefore not surprising that many people consider political speeches as mass hypnosis. We can see that within political speeches, suggestions are delivered. In hypnosis, we often consider our clients to be suggestible. Suggestibility can be seen as an ability to welcome new ideas, being prepared to learn new things and take on other perspectives, for example.

So then as we take on new information, ideas and perspectives, depending on its relevancy and beneficial value to the individual, it may well affect a person’s experience anywhere from a little to a lot. In a hypnotherapy session, the client is the person being influenced, and is therefore in some sense also suggestible. They have chosen to be there in some way and therefore are open to making changes, obtaining new perspectives, and affecting their experience in ways that are going to help them enjoy life more, or cope with better in some way.

If you look at the work of Theodore Barber (1969) you’ll know that very few adults ever accept information without appraising it in some shape or form. So there is a great big difference between suggestibility and gullibility. Hypnosis does not render people gullible.

Is the same sort of suggestibility present when we are subjected to political speeches delivered by prominent politicians? I don’t really think so. We are open to new experience, or may dig our heels in, defend our other choices in opposition to the politician, for example. And though that can happen in therapy too, there is a difference.

There are indeed a number of parallels between how some schools of hypnosis explain hypnosis and some of the ways in which politicians deliver their messages, but politicians are not using hypnosis per sé. Many even believe that unless a formal and consensual induction has taken place, hypnosis has not occurred. Some believe that unless there is understanding and agreement, hypnosis has not occurred. Ok, so we might use certain terms related to hypnosis to describe the effects of political speeches from time to time, but when you look closer, you see how easy it is to distinguish one from the other.

If you really want to examine how and why people vote for the politicians that they do, then go examine and explore what the political psychological science research suggests rather than believing it is because of hypnosis being used. For example, in a paper The Psychology of Voting by Jon A. Krosnick, Professor of Psychology and Political Science at Ohio State University, he shows that the single most powerful predictor of a person’s vote choice is his or her political party identification. Krosnick adds:

“Second, research has shown that voters’ perceptions of candidates’ personalities (their intelligence, their knowledge, their trustworthiness, and their ability to be strong  leaders) also predict some people’s votes very well.  And people’s assessments of the  health of the country predict other people’s votes.”

“Another interesting finding from political psychological research is that people don’t treat good and bad information about a candidate equally.  If a little creature is to survive in the forest, it must optimistically look everywhere and anywhere for food, but it  must also be hyper vigilant for any signs of danger, so it can make a quick escape when necessary.  In a similar way, voters are especially attuned to unfavorable information about political candidates.  Learning one bad thing about a candidate does much more damage to the candidate’s image than learning one good thing helps.  So it is no surprise that we see so much negative advertising: a dollar spent criticising your opponent will help you more than a dollar spent spreading the word of your good qualities.”

Go an explore, you’ll find some insight that is definitely just as fascinating as the fantasy that politicians are wielding hypnosis upon the masses. 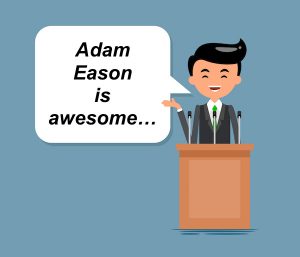