How to Stop Toxic Positivity 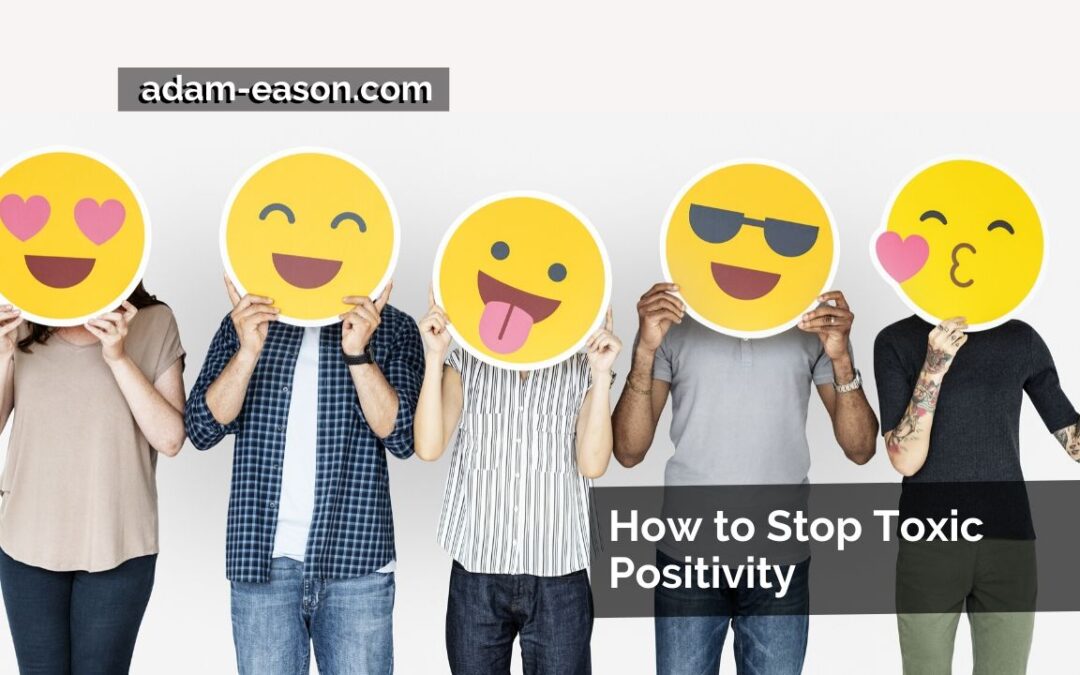 There have been times when I’ve really struggled during lockdown. Having young children, running a business in a tough financial climate, being prone to depression, not being able to see close friends, attend my gym, run my classes, carry out planned research projects, and much, much more besides. Yet in my role as therapist, trainer and as someone who seeks to disseminate research and content about how to prevail psychologically in life, there is a certain level of expectancy that is placed upon me (by myself as much as others) to remain positive and maintain a certain level of positivity regardless of life conditions.

It is this seeming obsession with being positive at all costs that I wanted to write about today.

“When we push aside difficult emotions in order to embrace false positivity, we lose our capacity to develop deep skills to help us deal with the world as it is, not as we wish it to be.” – Susan David.

Have you ever heard these phrases come from someone after you expressed a negative emotion? Or maybe, you have said these phrases to someone when they’re expressing their emotions:

“Don’t be sad, pull yourself together”

“Just don’t think about it”

“Just be positive” or “look on the bright side”

“Everything happens for a reason”

“I don’t want to hear anymore of that negative talk”

Phrases above sound encouraging, motivating, and helpful on the surface. On the other hand, they are often shaming, minimising, undervaluing, do not acknowledge or respect that person’s reality and has a potentially huge impact on someone’s well-being. Instead of feeling better, it risks more undermining that person’s mental health. It can make a person think that those negative feelings aren’t important, or even worse, make the person think those feelings are wrong opr indicative of something more serious being wrong. Moreover, people then often push back against those negative feelings and often go on to avoid certain emotions. We all love positive vibes. We love self-compassion, affirmations, making a good mantra, having positive self-talk, no doubt we love that stuff; I write about those kinds of strategies often here. But the timing, that is often what matters. Pushing your emotions away isn’t a very good idea. The impact of avoiding emotions will usually cause further mental issues. In 2002, a psychiatrist named Joseph Ciarrochi and his colleagues conducted research about the effects of avoiding certain emotions and showed that it typically tended to result in poorer mental health.

Here’s a case for people who tend to avoid emotion:

People who tend to avoid their emotions would likely have a mental condition named Alexithymia. Alexithymia disorder is a condition when people could barely identify their feelings. People with Alexithymia tend to minimise their feelings and focus more on external events. They are more likely to have further physical disorders such as eating disorders, be addicted to drugs, and more likely to have physiology issues. They could also bring up an arbitrary action towards other people’s emotions in order to get things that they want.

It has been scientifically proven that humans are born with complex emotions (though we probably don’t need science to tell us for us to know that, thanks to our own experiences!). Emotions are the seemingly uncontrollable brain chemical reactions that attempt to balance our physiological system. Every emotion matters and it is the way our brain communicates the signals from external events. Our brain is amazing; it can incredibly detect things beyond our immediate awareness. For instance, if we’re in danger our brain will produce an Adrenaline hormone which will make us feel frightened or readies us for battle, our body declares a state of emergency and gets into fight or flight mode. It makes us more sensitive and alert. Those hormones produced by a chemical reaction in our brain will balance our body system. That’s one good reason why managing emotions is likely to more healthy than avoiding emotions. It is very humane to feel things, both positive and negative emotions. There’s nothing wrong with being vulnerable and expressing emotions, including the negative ones. The point is, however, you must learn the most effective ways and places for expressing them. Otherwise, instead of feeling better, you may feel worse. Some unsuitable responses may lead to further mental problems, including insisting on toxic positivity and pushing the emotions away!

“Fake positivity can perpetuate a lot of the stigma around mental illness. Encouraging someone who has clinical depression to focus on the positive is not helpful and can actually do more harm. This advice can bolster the feeling that they are at fault because they cannot simply pull themselves up by the bootstraps.” – Vanessa Bell Bennett.

So, the question is, when can we tell if it is actually toxic positivity?

1. The phrases used tend to oversimplify things, and deny reality, along the lines of:

“Just don’t think about it!”

“Come on, many people suffer worse”

And other undervaluing phrases that tell you that your emotions don’t matter. If only it was that easy, no psychotherapist, psychologist nor psychiatrist would be needed in the world. Every problem could be solved just by a simple “Just get over it” words.

2. It doesn’t leave any room for pain or difficult emotions….

“Happiness is a choice”

“Be grateful every day”

All right, imagine that you just fell off the stairs and insist on thinking positively, like “oh, great! At least I got to the ground faster than I would have done,” which seems a bit bizarre and does not acknowledge what you may actually be feeling.

Toxic Positivity could be manipulating. It forces us to be okay when things are actually not. It could manipulate our thought and make us feel as if we are weak, and useless for feeling certain negative emotions. It forces us to fake things up, and lie to ourselves about our feelings.

So, instead of using that toxic positivity, what are we supposed to say?

Instead of pushing yourself or someone to change their grief into happiness quickly, which is sometimes impossible, learn to use the realistic positivity.

According to psychologists, Realistic Positivity means seeing and accepting how we are right now – both in our inner and outer world – and then putting our focus on what we would love.

Therefore, this realistic positivity will lead to self-acceptance. By aiming for a realistic positivity, we tend embrace the reality and full scope of events and emotions that happen in our life, without degrading any other emotions. It is a way to live healthier than insisting upon staying okay all the time even when you’re actually not. Being fine all the time is impossible. So is trying to force someone else to always be.

On the other hand, toxic positivity makes us feel alone and less supported. It denies the existence of life’s ups and downs, and can lead to self-abasement. Hence, it isn’t healthy for the mental well-being of a person.

Are you suffering from toxic positivity? Here are a few tips for you.

The first step to adopt a healthier approach to our emotions is to be aware of the behaviours that could be accounted for as “toxic positivity” whether in ourselves or when talking to others. There is toxic positivity when we are:

However, what you resist, persists. You pretend the ‘bad’ emotion is not there, but it hovers around, like a pesky fly you’d rather not have to swat and hope it flies far away. Ignoring it with the hopes that it’ll just go away by itself tricks you into thinking you’ve made a choice, and thus exercised a measure of control, but in reality, there is no way to control whether it repeatedly comes back, buzzing, or flies away forever.

Acknowledging it’s presence, and accepting that it’s there even though you don’t want it there, is incredibly empowering. You actually bring it into a personal space for you to be able to exercise more control over. You coax the emotional fly into a confined box where you get to decide how you want to deal with it. You DO have more control over your desired outcome.

Accepting your difficult emotions compassionately, without judging them or yourself, actually helps with coping, and decreases the intensity of those very emotions. Remind yourself that facing one’s biggest fears can actually diminish it’s impact and lessen how frightening it actually is in reality.

Also, make a list of options that you could explore in order to solve, or deal with, the situation that is triggering the negative emotion, and then try them out for size, or choose the one that gives you the most peace or relief. Doing this actually allows you to start feeling a sense of control, encourages realistic hope, and instils a sense of empowerment. See how you want to, or can manage them, and decide how YOU get to control it for a change.

As much as we hate failing at something, we also need to consider the fact that we might experience failure of some sort, and failure will help you grow as an individual. Adopt a growth mindset and be aware of your progress and development. You don’t need to fear failure instead you should consider that experience as an opportunity for growth and transformation.

Whenever there is an ill-fated situation, we usually say to ourselves that it happened for a reason or look at the bright side. Consider taking responsibility for what happened and do not ignore it. Instead, take action and focus your will to change your current situation. Next time something “negative” happens ask yourself: What can I learn from this situation?

While it’s important to keep an optimistic outlook, especially in building emotional resilience, it is just as important to be practical and to see all sides of a situation objectively to accept the (negative) reality of challenging issues so that we can better prepare for them and adequately manage their possible consequences.

So, be careful of this toxic positivity, and don’t be afraid of being authentic and vulnerable in  situations. It takes both sun and rain for flowers to grow!

Would you like a satisfying and meaningful career as a hypnotherapist helping others? Are you a hypnotherapist looking for stimulating and career enhancing continued professional development and advanced studes? Explore the pages of this website.
Adam Eason’s Anglo European training college.