Hypnotherapist Meets His Hero – The One and Only Stuart Pearce

So last week, I had a day out at the races… Lingfield races to be precise, a lovely place where the sun shone, the bars served their own racecourse real ale and Frankie Dettori just kept on winning.

I was in the winners enclosure at the end of the final race when Frankie did his trademark star jump off his horse and I managed to record it all for posterity on my iPhone!

The only thing that could have made the day better was that I was attending a charity dinner where the guest speaker was the one and only Stuart Pearce.

Stuart is currently the England U-21 football team coach and many tip him to be a future England first team coach. For me, ‘Psycho’ was more than just a Nottingham Forest footballer, England left back regular, wielder of huge thighs, extreme freekick taker, bone crunching tackler, and virtual pacey left winger…

For me Stuart Pearce epitomised much of what I have come to value in life. Known as a real hard man, he was never dirty. He was hard and fair. This was something I wanted to ask him about last week when meeting him…

Pearce played in the European Championships for England 1992, we sadly failed to win any of our group games… But Stuart had a thunderous free kick strike the underside of the crossbar and bounce away from goal in a drawn game against France. Moments before taking the free kick, Pearce was headbutted off the ball by French defender Basile Boli, leaving a gash on his cheek. When England won the free kick Pearce immediately disregarded his injury and rushed to take it. The referee insisted on Pearce having the blood wiped from his face first, but Pearce soon returned and unleashed his thunderbolt, which failed to go in.

These days, players roll around crying and complaining and trying to get other players into trouble. That was never Stuart Pearces style. He just got on with things. When he spoke about this incident last week, he was still gracious, gentlemanly and firm with who and how he is and I just love that.

I could go on for hours about all the goals I watched him score, about the fact that he loves his punk music and that he has been an icon in my life, someone I strived to be like, you can read more about him at Stuart Pearce’s wikipedia page here. 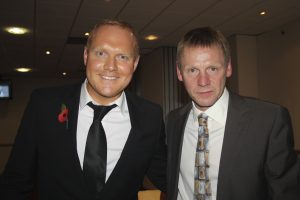 Anyway, a very big thank you to Mr Mike Lawson, a previous student of mine who was kind and thoughtful enough to have bought the tickets for me and my guest to attend. I’ll be eternally grateful for the memories I have lodged up here in my memory banks.

Have a great weekend, I am running my hypnotherapy diploma this weekend and very much looking forward to it.