Ways to Be More Fun Person 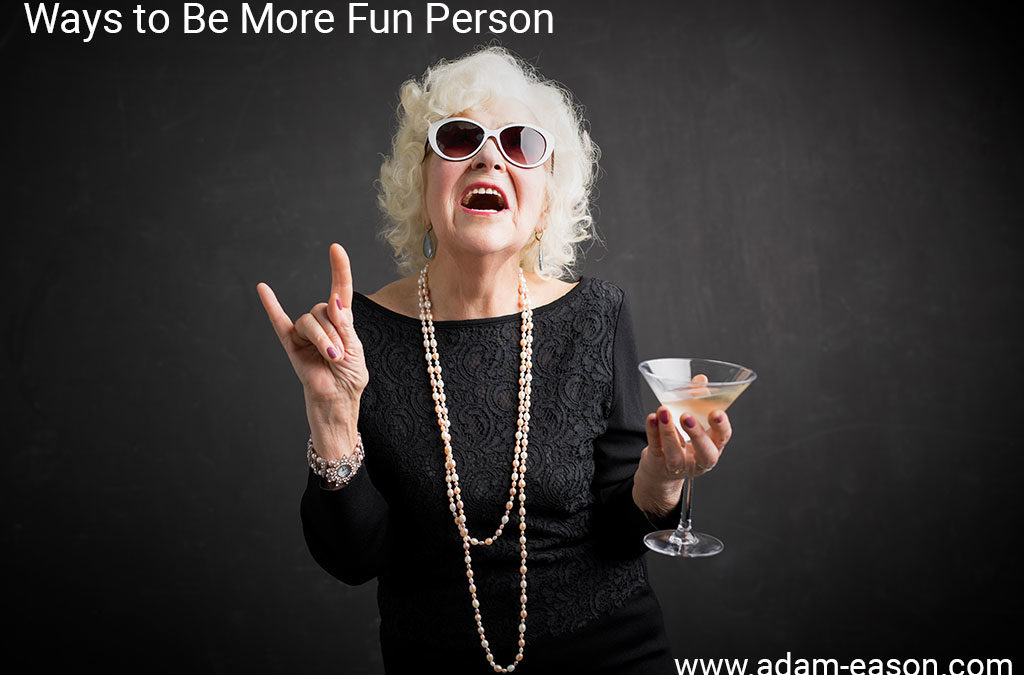 We all know a “fun person” don’t we? Someone who is just great to be around. I have a couple of friends that I love being around and I talk about them often when I am teaching.

If you want to be a person whom people love to be around, you sometimes have to be a charismatic person. I’ve written on that subject before, have a read here…
– Charisma: 8 Ways to Become More Charismatic.

People often ignore or overlook innate characteristics (intelligence, extraversion, attractiveness, and so on) and instead focus on qualities that are completely under your control, such as approachability, humility, and positivity.

These words, and others like them, describe people who are typically well skilled in social intelligence.  Becoming a more charismatic person is completely under your control, and it’s often a matter of social intelligence. Unlike innate, or fixed characteristics, or elements that do not change a great deal in a typical person (such as your IQ, for example), it is a flexible skill that you can improve with effort.

What follows are 10 key behaviours that socially intelligent people typically tend to engage in that make them so likeable and good to be around….

It has been shown repeatedly that making a personal connection leaves a good impression in the mind of the person you connect with. People will warm to you (mostly) and are more likely to favour you over those that have not made a connection when a decision needs to be made. This is the major underlying method of building work and social groups.

Even in a crowded room, charismatic peoples make people feel like they’re having a one-on-one conversation. And they communicate on a very personal, emotional level. They never forget that there’s a flesh-and-blood human being standing in front of them.

Being approachable is a key building to crating relationships with other peoples, and to creating a strong support team in which trust, confidence and ideas can flow. When you’re approachable, others do not sit on or cover up problems. This means that they are able to bring issues to you before they become full-blown crises because they know that you won’t react badly.

Being humble doesn’t have to mean unacknowledged. People can acknowledge what they are, accept themselves and even let others know it. Humility comes from the idea that one does not feel superior to others due to his attributes, possessions, social status or state of mind.

Charismatic people mostly maintain a positive outlook, and this shows in how they describe things. When you feel positive on the inside it is like you are smiling from within, and these smiles are contagious. Furthermore, the more others are with positive people, the more they tend to smile too! They see the lightness in life, and have a sense of humor even when it is about themselves. Positive people have a high degree of self-respect, but refuse to take themselves too seriously!

Even in undeniably negative situations, charismatic people emanate an enthusiastic hope for the future, a confidence that they can help make tomorrow better than today.

When it comes to their own accomplishments and failures, likeable peoples take things in stride. They savor success without letting it go to their heads, and they readily acknowledge failure without getting mired in it. They learn from both and move on.

They do things differently. They encourage others to join them. And if doing something competitive that they are good at, they don’t always win.

You can read more on this theme here with this article:
– Why and How To Express Your Individuality and Uniqueness.

It’s easy to become so focused on the big-picture abstract that we neglect the people who are right there in front of us. Charismatic people make the time to genuinely connect with other people. They are unfailingly generous with whom they know, what they know, and the resources they have access to. In fact, they believe that your success is their success.

They’re generous with their money, their time, their energy, their talents–with everything they have. These activities leave a lasting impact on them and the people around. Researchers from the University of Zurich in Switzerland wanted to see whether simply pledging to being generous was enough to make people happier. The found that planning to give away just a little bit of money had the same effects on happiness as giving away a lot.

7. They are Active Listeners:

Charismatic people inspire trust and admiration through their actions, not just their words. They know how to listen actively. The best conversationalists and popular people are listeners. Most people don’t listen properly. They are thinking about what they are going to say next or about something else -what shall I cook for dinner or I don’t like that jacket. Something completely different. So they don’t hear half and often then talk at a tangent. On the other hand, Charismatic people live for that moment and really listen.

8. They Pay Genuine Interest to Others:

Charismatic people know how to read people as unspoken communication is often more important than the words people say. They note facial expressions, body language, and tone of voice in order to get what’s really going on with their people.

They pay genuine compliments and be polite, treat others as they would like to be treated and be very generous in their thoughts, words and actions.

Charismatic people have an enthusiastic positive approach to life. They always look on the bright side, never gossip or criticism a third person. Finally, they always find something good to say to the other person and others.

“Charisma only wins people’s attention. Once you have their attention, you have to have something to tell them.”  – Daniel Quinn.

Charismatic people understand that their knowledge and expertise are critical to the success of everyone who follows them. Therefore, they regularly connect with people to share their knowledge (as opposed to superficial small talk). They don’t puff themselves up or pretend to be something they’re not, because they don’t have to. They have knowledge, and they share it with their people.

Likewise, if you’d like to learn more about self-hypnosis, understand the evidence based principles of it from a scientific perspective and learn how to apply it to many areas of your life while having fun and in a safe environment and have the opportunity to test everything you learn, then come and join me for my one day seminar which does all that and more, have a read here: The Science of Self-Hypnosis Seminar. Alternatively, go grab a copy of my Science of self-hypnosis book, it’ll help you be a fun person!