The Personality Traits of a Psychopath 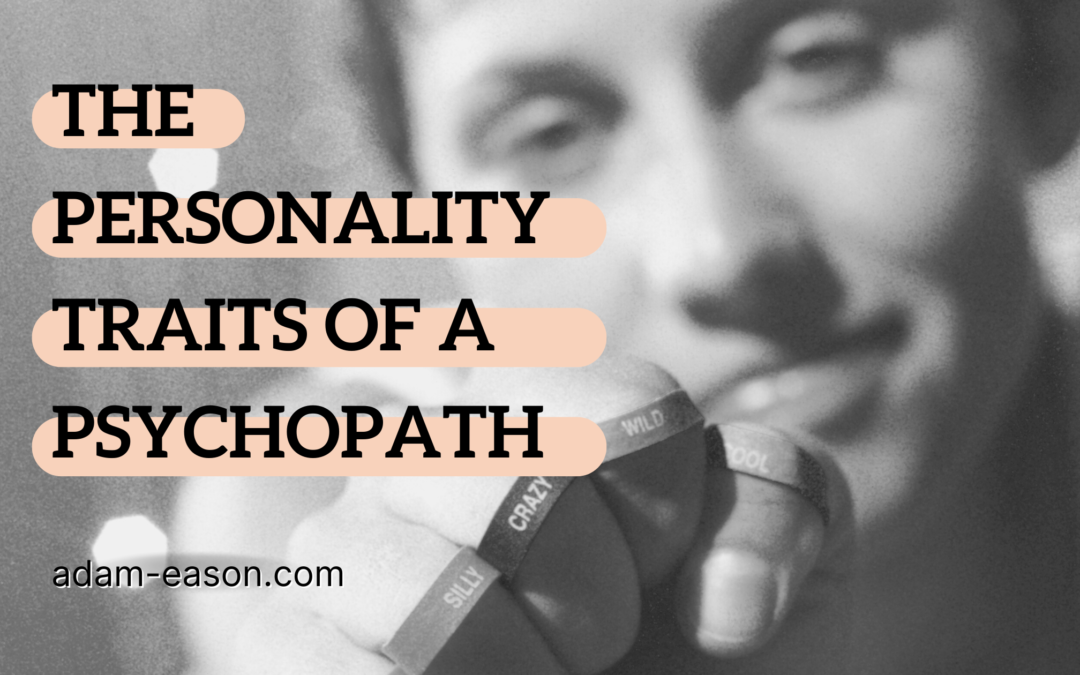 How often have you come across the term ‘Psychopath‘? Your answer might well be ‘frequently, especially if you have developed a penchant for Netflix documentaries. A better question that arises, however, is, what does it really mean? A psychopath is not merely a person having an antisocial personality disorder, except there is a long list of characteristics that follows. Manipulative, exploitative, and lacking empathy are a few of the many traits a psychopath may possess. Moreover, there are various abnormalities in their behaviour that conflict with societal norms. Not only do they tend to have shallow emotions, but they also deny responsibility for their actions.

According to modern-day research, 4 per cent of the population is “sociopathic”, whereas 5-15 per cent is “almost psychopathic”. People tend to use the terms sociopath and psychopath interchangeably. Although, they are slightly different from one another both in definition and behaviour.

Both the personalities are antisocial and lack empathy. However, psychopaths tend to be more manipulative; in other words, they are good at playing pretend. Thus, they can be seen as more charming, which makes it easier for them to lead a normal life. Sociopaths, on the other hand, tend to be more inconsistent, rage-prone, and mainly driven by impulses. Thus, comparatively, they fail to lead as much of a normal life.

About 1.2% of the adult population has psychopathy, according to a 2021 study in Frontiers of Psychology.

In their effort to make themselves likeable, they often work on their charisma. Psychopaths can be engaging conversationalists, and they will try their best to gain your trust and create a soft corner in your heart. Acting funny, sharing stories of make-believe, and spending time with their targets to look good. They will tell you what you really want to hear in order to secure their so-called ‘good image’ and not because they really want to. The desire to seem irresistibly charming is one of their key goals in achieving their pursuits. Additionally, psychopaths can be also referred to as, “social chameleons”. They would go out of their way to please you but beware, they are usually not what they appear to be. To identify this trait, observe if the person exhibits excessive self-love or is always trying to draw people’s attention.

Empathy simply explained, is when you try to stand in somebody else’s shoes and look at life from their perspective. Psychopaths tend to lack good levels of empathy. They are unfeeling toward the pain and suffering of other individuals. Research conducted by neuroscientist Adrian Raine reveals that people with antisocial personality disorder have fewer cells in their prefrontal cortex, which is considered the most evolved region of the human brain. Among many functions, this highly efficient part of the brain is responsible for the capacity to understand the feelings of other individuals, the capacity to expiate from past experiences and make principled judgments.

As a result of lacking empathy, psychopaths are likely to commit crimes that would inflict pain upon others. Witnessing someone’s suffering does not bring them remorse; instead, usually strengthens their ambitious self. Moreover, they end up blaming their victims for the cause of their own actions. You can tell a person is exhibiting psychopathic tendencies when they do not feel and share others’ emotions and show no remorse whatsoever.

A psychopath will get you to do what they want. They will attack you mentally and emotionally to any extent to get their job done. Gaining influence and control over their victims is one of their key abilities. It is a piece of cake for them to make you believe what they want. Be it by constantly lying, guilt-tripping, or showing passive-aggressive behaviour. Generally, they will work hard to make you seem to be the cause of a problem that they initiated and won’t take responsibility for. Moreover, their unpredictable behaviour will keep you guessing about their next move, so be cautious.

Impulsivity is often described as taking action without forethought. Psychopaths are known for having an urge to acquire immediate gratification. They are quick to act based on their feelings. Hence, they won’t be thinking of the risks or benefits that were to occur from their life choices. A psychopath may move to a new city or end a life-long relationship within a blink of an eye. It indicates that they will act before you know it. Their impulse-driven personality is what causes most of the problems to occur in the first place. So, if you happen to know a person with similar traits, it is high time to be vigilant.

Psychopaths have inconsistent life patterns. They often struggle to follow schedules, laws, rules, or policies. Even so, they decide to stick to a certain routine, but they are unable to do so for a long. They are most likely to exhibit expressions of irritability and inadequate control over their temper. Thus, it leads to social deviance.

6. Inability to distinguish right and wrong

Psychopaths seem to have less knowledge of the difference between good and evil. They are mostly driven by their actions and not emotions. Thus, they lack human conscience and will immediately act upon their first thought. This absence of a moral compass becomes the main reason for distortion in their personal relationships. If a person tends to spend less to no time thinking before taking action, resulting in committing trespasses, then it is a warning sign for you right there.

7. Disregard for safety and responsibility

Keeping one’s word is a foreign concept to a psychopathic mind. They are the last people to put your trust in. Promises are merely words to them and nothing else. Due to a lack of feelings towards others, they are least bothered about any commitments made. Psychopaths tend to play the victim card in most situations and will avoid taking any sort of responsibility. They will always find a way to blame others for their own faults and not feel a pinch of shame in doing so.

This particular form of lifestyle is exploitative, intentional, selfish, altogether being intentional financial dependence on others. It shows a lack of motivation and ambition, refusal to take responsibility, and low-self discipline. For instance, a work job requires you to be consistent and responsible. Both of which are highly difficult for psychopaths to cope with. Thus, they tend not to perform under supervision because of their dominant and aggressive nature. Psychopaths are also known for thrill-seeking adventures and thus are victims of boredom. People with such a lifestyle are always in search of benefiting from others’ kindness and misusing it for their personal benefit. They use people to acquire what they want with zero respect for how they feel.

Having a narcissistic personality is extreme self-involvement which makes you unable to regard the needs of others around you. It is a mental condition where the centre of a person’s attention is their own importance and nothing else. This makes them extremely self-centred and arrogant. It also involves the need for excessive attention and admiration at all times. Thus, resulting in troubled relationships. A person showcasing such signs is highly possible to be a psychopath.

A psychopath is careless about the feelings of others. They are not concerned about how their actions and behaviour may affect other people. Howbeit, they tend to emphasize that others are overreacting when they feel any sort of pain. Thus, psychopaths find it difficult to feel guilty or empathize when they hurt other people. A psychopathic individual will make life decisions fearlessly with no regard for the feelings of the ones around them. This tells us that they highly lack remorse and empathetic concern for even people who are close to them. If reading this reminds you of someone whom you might know, this is your red signal alert.

We know for a fact that not every person with an antisocial personality disorder is a psychopath. However, psychopaths are seen as individuals with a severe antisocial personality disorder. It is a mental illness where a person fails to discriminate between right and wrong. They also tend to ignore the basic rights and feelings of the ones around them. Such people are more likely to get in trouble with the law, show criminal versatility, and lie very often. They may be volatile, arrogant, and domineering. Psychopaths normally cannot fulfil responsibilities such as catering to their family, going to work, or school.

Insensitivity toward the feelings of others is one of the main signs of a psychopath. Callous-unemotional traits are said to be rooted in genetics by birth. Thus, CU is heritable. As the person ages, environmental triggers bring about callousness to the surface of their personality. It showcases a pattern of behaviours, including lack of guilt or remorse, lack of concern for the feelings of others and actions of own. Interpersonal callousness is also observed at a high level indicating deceitfulness, aggression, manipulation, and lies. Callousness also means that their emotions, if any, are short-lived. So, if you have ever had an experience with a person who is emotionally hardened, they might be psychopathic to some extent. Beware and try not to fall for their superficial charming personality, which is only to deceive you.

Self-esteem is important to every human being to ever exist, don’t you agree? But for psychopaths, it is a matter of extreme importance. Not only is their self-esteem puffed up, but they also hate competition. A psychopathic person would take credit for anything and everything. Whether they deserve it or not, they are practically hungry for it. Moreover, if they spot a competitor, they will devalue them. This domineering personality is what makes them stand out. Their purpose is not only to win but to dominate, and they will achieve it even if it means destruction. Also, they tend to be very intimidating but will not hesitate to become violent as per their need. Their desire to always be on top is never-ending. If this rings a bell and reminds you of someone you might know, it is time to run!

Emma Young, a staff writer at BPS research digest, wrote an article on the study of personality traits shared by famous psychopaths. The task was carried out by Cristina Crego at Longwood University and Thomas A. Widiger at the University of Kentucky. They decided to look for shared traits in six people, both real and fictional, who have been labelled as psychopathic. These people were:  Ted Bundy, Clyde Barrow, Bernie Madoff, Chuck Yeager, James Bond, and Sherlock Holmes. The results led the two to identify eight traits showing up repeatedly. These were: low vulnerability, low self-consciousness, low anxiousness, fearlessness, boldness, assertiveness, dominance, and excitement-seeking. However, the traits that really stood out and that overlapped in the cases of Bundy, Barrow, and Madoff. These traits reflected antagonisms such as callousness, manipulativeness, dishonesty, arrogance, and cruelty. However, Yeager, Bond, and Holmes didn’t show these antagonistic traits and didn’t meet traditional criteria for psychopathy. Instead, they may have been mistakenly identified as psychopathic in the past simply because of their fearlessness and boldness. In conclusion, it tells us that psychopaths are not that easy to identify but also not impossible to identify.