The Health Benefits Of Going Vegan 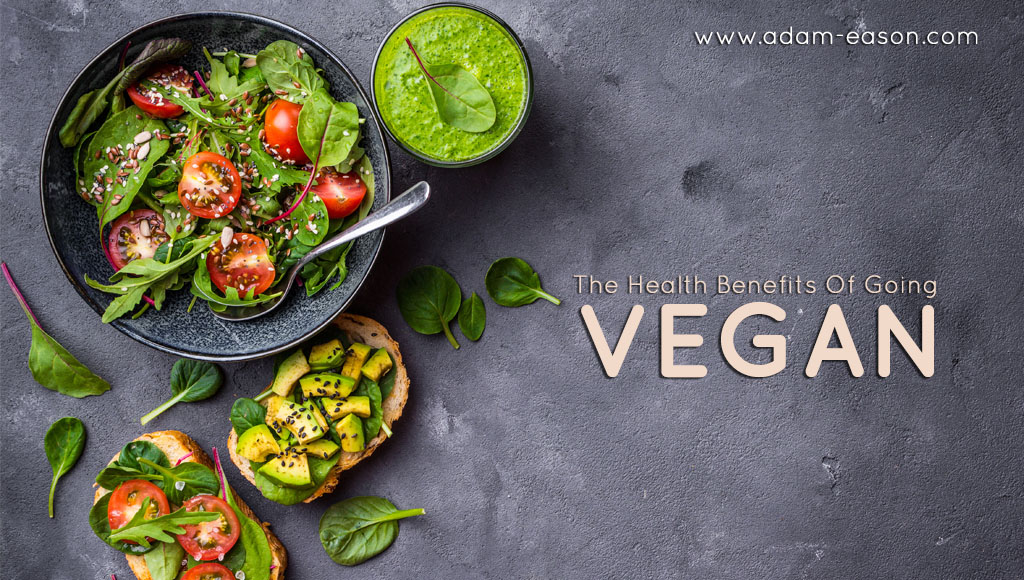 As of Boxing day last year, I went vegan. On rare occasions, I have been a bit flexitarian, that is, I have had the odd lapse on dairy here and there but not got stressed about it. I did Veganuary very strictly, and was strict in February but then stopped worrying if I had a rare foray off course every now and then. I’ve not really gone on about it much as I wanted to stick at it for at least 6 months before feeding back on my thoughts and experiences.

For me, it has been about my physical and mental health. I’m not going to get into the politics and impact of meat eating on the planet here, but I have beliefs there that also fuel my desire to adopt a vegan lifestyle. I do genuinely struggle with the idea of putting meat into my mouth knowing that it was once a living sentient member of the planet population. It is this that continues to make it easy for me to steer away from meat.

I’ve loved seeing the explosion of veganism here in the UK and every restaurant these days (and even fast food outlets) tends to have vegan options that are pretty good. The choices of foods, the recipes you can find make it delicious too – I was worried because I do love eating, and at the end I’ve included a number of pictures I’ve taken of some of my favourite flavoursome vegan meals.

This article then, is about the health benefits gained from veganism and it is not me suggesting that everyone should go vegan, but maybe have a day a week where you do it or try it for a period of time and see how it works for you and if you could work it into your life in a flexible way. Even small changes in your life could make a big lasting difference. Reducing processed meat and reducing red meat in particular will only contribute to your long-term well-being as far as the evidence and my experience is concerned. You can go and look it up for yourself, veganism is linked with longer life expectancy according to a range of studies.

“Veganism is not a sacrifice. It is a joy.” – Gary L. Francione.

Adopting a vegetarian diet can be a fantastic entry into experiencing better health. A vegetarian diet is associated with a higher consumption of fibre, folic acid, vitamins C and E, magnesium, unsaturated fat, and countless phytochemicals. This often results in vegetarians having lower cholesterol, being leaner, having lower blood pressure, and reduced risk of heart disease. Let’s explore some of the other benefits of adopting a vegan lifestyle.

“It’s not hard to make decisions once you know what your values are.” – Roy E. Disney.

According to the American Institute of Stress, about 90% of all visits to primary care physicians are for stress related disorders, ranging from stomach trouble to heart disease. Job related stress costs American businesses about $150 billion a year.

Researchers at Benedictine University performed a study to investigate the impact of restricting animal products and mood and confirmed that mood improvements do happen when eating meat, fish, and poultry are restricted. Additionally, Croatia’s Institute for Medical Research and Occupational Health conducted mental health surveys amongst vegetarians and found them to have lower levels of neuroticism.

The researchers who carried out the study suggested that the reason for the mood improvements was to do with the elimination of long chain fatty acids from the diet, in particular one called arachidonic acid, which is present in meat and is associated with depressive symptoms.

I have long had challenges and a need to be dedicated to working on my mood having experienced depression as a young man. I have noticed a favourable effect upon my moods as a result of my veganism.

“Due to the increased consumption of vitamins such as magnesium and calcium, you will have a more regulated and effective sleep cycle,” said Geeta, a holistic health specialist, nutritionist, raw chef and life coach. Magnesium helps improve our sleep health whilst calcium helps aid a healthy sleep cycle. And the highest source of magnesium comes from plant based foods such as spinach, pumpkin seeds and avocados, for example.

Again, my own sleep is something I am very sensitive about. Sleep keeps me performing effectively cognitively within my work, my study, my research and so on. It also enables me to take on the health challenges I set for myself with my running and weight lifting. What’s more, wee tend to make poorer eating decisions for ourselves when we are tired (we crave sugary foods in particular). I have found that veganism has aided my sleep fairly well.

3. May Improve Symptoms of Psoriasis.

Psoriasis is a skin disease that causes skin redness and irritation and can be debilitating for those who suffer from it. However, according to research published by Brazil’s Universidade Federal de Pernambuco, a vegetarian diet may positively improve symptoms.

I mention this simply because my experience has been that my skin has really and notably benefitted in the past six months. So I looked to see if this was coincidental or if there was any evidence to support this beyond my own subjective experience; I was delighted to see that there was.

4. May Reduce Incidence of Diabetes.

According to Loma Linda University School of Public Health, vegetarian diets are associated with a significant reduction in the incidence of diabetes. Information published by George Washington University School of Medicine has also confirmed that vegetarian diets offer an important benefit for the management of diabetes and can even reduce the likelihood of development by one half.

Research released by the Nuffield Department of Clinical Medicine at the University of Oxford has shown a strong relation between the risk of developing cataracts and diet; with a higher risk falling on meat eaters and the lowest risk groups being vegetarians and vegans.

“Vegan food is soul food in its truest form. Soul food means to feed the soul. And to me, your soul is your intent. If your intent is pure, you are pure.” – Erykah Badu.

According to the JCU University Skin Cancer Research Clinic, there is a relationship between a vegetarian diet and decreased risk of cardiovascular disease. Why? Most vegetarian diets are full of antioxidant rich foods. Antioxidants are molecules that can reduce the damage caused by oxidative stress, including atherosclerosis.

For me, my running performance has been advanced notably as a result of my veganism, and my VO2 max has consistently been raised in recent months. The benefits on my cardio-respiratory endurance could well be related to this finding.

“Whenever you find yourself on the side of the majority, it’s time to pause and reflect.” – Mark Twain.

There’s very little (if any) health benefit, to eating animal fat. It should come as no surprise that when you remove it from your diet, you will also remove the detrimental effects it has on your health and life. After examining the long term effects of following a vegetarian diet, Korean researchers very comfortably concluded that body fat, and cholesterol levels were lower in vegetarians than omnivores. Seems obvious.

I actually measured this directly and as scientifically as I could. I employed a company called Thriva to test my blood in January and I compared it to the blood test results following 5 months being a vegan – my cholesterol was significantly lower and at an impeccable level for optimum health according to the second test. At my age, these effects on my cholesterol and cardiovascular health are of paramount importance to me.

8. Less Risk of Stroke and Obesity.

“Becoming vegan is the most important and direct change we can immediately make to ourselves and the planet” – Chris Hedges.

There are always exceptions but, in general, vegetarians and vegans tend to be much more deliberate in their food choices and far less likely to binge eat or choose foods based on emotions- two habits that greatly contribute to obesity. According to the University Hospital Ghent Department of Paediatrics in Belgium, following a vegetarian diet is a good way to reduce your chance at having a stroke or being obese6.

New York University Langone Medical Center reports that eliminating animal protein consumption in favour of vegetables will result in a higher urine pH; whereas low urine pH has been associated with stone formation.

10. It Can Satisfy All Your Nutritional Requirements.

If you think vegetarians and vegans are nutritionally deficient or always hungry, think again! The official position of The American Dietetic Association is that a comprehensive and well-designed vegetarian, or vegan, diet can be nutritionally sound and appropriate for all ages and stages of life, including infants, the elderly, and even athletes. Good health, reduced incidence of disease, and better management of existing health problems are all associated with following a vegetarian diet.

The combination of different nutritional profiles mean that vegans tend to have lower blood pressure and blood cholesterol, and have a healthier body weight, than people who eat animal products. In addition, vegans and vegetarians have a decreased risk of several types of cancer, including many cancers of the digestive system.

However, while the physical benefits of a vegan diet are well known, the mental health benefits aren’t necessarily common knowledge. I would contest that a vegan diet can improve mental clarity and may contribute to improved mental health too, but the evidence to support that is currently lacking.

Part of the reason for me writing about it at all, is that I think even if you do not adopt a full blown vegan lifestyle, and just did a day or two a week, it’ll have a favourable impact upon your health, I hope what I’ve written influences you in some way.

“One to change a few. A few to change many. Many to change the world. Starts with one.” –Anonymous

I’ll be honest with you, I have chosen to supplement a little bit to ensure I get my B vitamins, full protein required to assist with my weight lifting and a couple of others bits that are things I have deemed necessary for me personally, but are not necessarily required for everyone.

I have tried to resist posting endless pictures of my vegan meals, but here are a few photos of some of my favourites…..

Likewise, if you’d like to learn more about self-hypnosis, understand the evidence based principles of it from a scientific perspective and learn how to apply it to many areas of your life while having fun and in a safe environment and have the opportunity to test everything you learn, then come and join me for my one day seminar which does all that and more, have a read here: The Science of Self-Hypnosis Seminar. Alternatively, go grab a copy of my Science of self-hypnosis book, it’ll help you advance eating habits!