The Science of Silence: Why Silence Is So Good For Your Brain 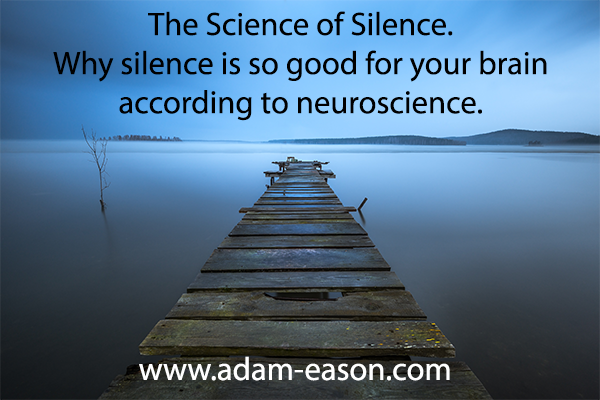 Silence is my subject today – it is not just good for you, it can do amazing things to your brain.

“Silence is the sleep that nourishes wisdom.” – Francis Bacon.

A few weeks ago I went to a live music gig at the Bournemouth O2 academy to see a couple of bands that I grew up with in my teens (those of you who follow me on social media will have seen pictures) whereby Ned’s Atomic Dustbin and The Wonder Stuff are touring together again. I had such great fun with some wonderful friends. The next day when I woke up, my ears were still ringing. What’s more they were ringing for a couple of days. I was desperate for some silence. It made me wonder how on earth band members actually have any hearing left at the end of a week, let alone a 30 year career. It also made me wonder how much damage noise creates.

We live in a noisy world, where we are typically bombarded with an array of sounds throughout the day; sounds with varying degrees of pleasantness. It is very rare for us to experience silence. Today, I want to tell you a little bit about why silence matters….

Research throughout the past century has linked noise pollution to an increase in heart disease and tinnitus. The World Health Organization likened it to a “modern plague” and stated that “there is overwhelming evidence that exposure to environmental noise has adverse effects on the health of the population.”

We are not just passive recipients to noise either. We bombard our ears with live music venue speaker systems, YouTube, music, TV, radio, news, podcasts and, of course, all of those sounds that we are busily and constantly creating in our own heads.

How much time each day do you think you spend in proper and complete silence? The answer is probably; very little.

As the noise in our lives gets louder, more people are beginning to seek out silence, be that by adopting a practice of sitting quietly for 10 minutes every morning or heading off to a silent retreat. Some silent retreats promote the power of silence by refraining from reading, writing, or eye contact. Back in 2011, 100 scientists attended a silent retreat in the name of research and discovered that shutting off speech heightens awareness in other areas. They practiced vipassana meditation in silence, which aims to promote overall wellbeing.

If you are unable or not really inclined to go and seek out such a retreat, then finding time for silence in your life is something that will bring you (and your brain) much reward. Today I am writing about actual silence and the effect it can have upon us – I am not talking about philosophical, political or symbolic silence – that is a discussion about other topics altogether, and one for another day at least. Here are a number of science-backed ways that silence is really good for you and your brain.

1. Silence Is a Stress Reliever:
Noise has a pronounced physical effect on the brain, which often leads to increased production of stress hormones. Sound waves arrive at the brain in the form of electrical signals via the ear, which the body reacts. In particular, the amygdala (the part of the brain that is associated with memory formation and emotion) is activated, which leads to the release of the stress hormone cortisol.

A 2006 study to feature in the Heart journal showed that silence can release tension in the brain and body in just a couple of minutes. Researchers found silence to actually be more relaxing than listening to so-called “relaxing” music. As if you needed another excuse to ditch that “Pan pipes versions of pop music hits” CD, eh?

Florence Nightingale, the 19th century British nurse and social activist, argued that unnecessary sounds were the cause of distress (especially amongst recovering patients), and once stated “Unnecessary noise is the most cruel absence of care that can be inflicted on sick or well.”

Just as too much noise can cause stress and tension, research has found that silence has the opposite effect, relieving stress and releasing tension in the brain and the body. That by itself ought to be enough motivation to seek out some regular silence, there’s so much more though….

2. Silence Replenishes Mental Resources:
This is something that I have found incredibly important and appealing, and has resulted in me buying some noise cancelling headphones! There is so much sensory input coming our way from all angles in so many varying forms. When we get away from so much disruption (noise-based in particular), our brains’ attention centres start to restore themselves.

The never-ending attentional demands of modern living place a significant burden on the prefrontal cortex of the brain, which is involved in high-order thinking, decision-making and problem-solving. All things I have spent a great amount of time studying, researching and applying in my work as a lecturer and therapist.

When we make lots of decisions each day, engage in a lot of problem solving, have to think a great deal, our attentional resources are drained. Noise and incessant sound drains it even further. When our attentional resources are depleted, we are easily distracted, mentally fatigued, we struggle to focus, we struggle to solve problems effectively and our ability to come up with new ideas gets stunted.

Research looking into this has resulted in attention restoration theory, that demonstrates the brain can restore those depleted cognitive resources when we are in environments with much less sensory input than usual. For example, meditating in silence, or in the quiet stillness you find when walking alone in nature, or bobbing around in sensory deprivation tank, gives your brain the chance to let down it’s sensory guard, so to speak. We can once again tap into our creativity, we can reflect and enjoy the other restorative benefits. As Herman Melville wrote, “All profound things and emotion of things are proceeded and attended by silence.”

Here are a couple of related articles that will help you greatly in this respect too:

a) Solitude – The Importance of ‘Me Time’ and How It’ll Make You More Successful.
b) Why You Need A Digital Detox and How To Have One.

3. When Silent, We Tap Into the Brain’s Default Mode Network:
This builds upon the previous point.

When we talk about activating the default mode network of the brain, we’re talking about what scientists refer to as “self-generated cognition,” which occurs when we daydream, meditate, fantasize about the future or just let our minds freely wander.

In silence (one way of doing it) as discussed in the previous point, the brain is disengaged from all that external stimuli, and we get to tap into our stream of consciousness. Engaging the default mode network helps us to create meaning out of our experiences, empathise with others, be more creative and engage in mental and emotional reflection. That is, we get to go deeper, rather than being held in the shallow surfaces of the mind with all of life’s distractions.

Again, I refer you to the Herman Melville quote in my previous point.

4. Silence Can Regenerate Brain Cells:
I know this might seem crazy, but silence can quite literally create growth in the brain.

A 2013 study published in the Brain, Structure, and Function journal, involved comparing the effects of silence with varying types of noise and seeing the effects it had on the brains of mice. The researchers initially set out to use silence as a control in the study, what they discovered was two hours of silence daily led to the development of new cells in the hippocampus region of the brain that is associated with learning, memory and emotion. How about that?!

The findings offer some potential areas for further studies, but of course suggest that silence could have therapeutic benefit for people with depression or Alzheimer’s, which are typically associated with decreased rates of neuron regeneration in the hippocampus.

5. Silence Advances Sleep:
Evidence suggests that periods of silence throughout the day can enhance sleep and lessen insomnia.
A 2015 study in JAMA Internal Medicine showed that older adults who had trouble sleeping experienced less insomnia, fatigue, and depression after doing mindfulness meditation in silence.  Any form of meditation or self-hypnosis practice that helps to break the train of everyday thoughts leading to a relaxation response (mental and physical) is very worthwhile.

6. Silence Improves Memory:
Building upon point 4, going for a walk in nature alone can cause brain growth in the hippocampus, which also can lead to better memory function. A 2011 study published in the Proceedings of the National Academy of Sciences showed that adults who walked for 40 minutes three times a week for a year had brain growth in the hippocampus, the area of the brain associated with spatial memory. Silence does this and additionally, immersing ourselves in nature helps the brain to have better memory consolidation.

There you go, science-backed reasons that silence is good for your brain and general health. I am prescribing some silence to you!

Ok, I am off for a gentle and mindful run in the sunshine along the sea front, in as much quiet as that environment affords me.
I’d like to leave you with silence, but I can’t resist leaving you with this track, from another favourite band of mine when I was much younger, Depeche Mode (though my friends who liked them less than I, used to refer to them as “Depressed Mode”)…..