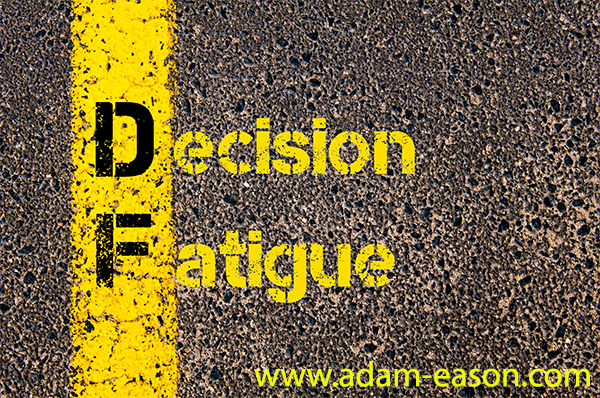 Decision fatigue is one reason that you may well give in when your child asks for one of the chocolate bars or treats lined up next to the till when you go to pay for your shopping. You have made a bunch of decisions as you’ve travelled through the supermarket, decision fatigue has set in…..

This has been researched by a number of authors, but primarily look at the comprehensive research of Roy Baumeister (2003) “The Psychology of Irrationality” and then with colleagues in 2005 Decision Fatigue Exhausts Self-Regulatory Resources.

As a real-life example with major impact, judges in court have been shown to make poorer quality decisions, or take easier options later on in the day than they do earlier on ( see: Extraneous factors in judicial decisions, for example ).

An article at Business Insider suggested that as mentioned previously here, that major figures such as former US President Barack Obama, Steve Jobs, and Mark Zuckerberg have been known to reduce the number of decisions they make each day by simply having one or two outfits that they wear every day.

Decision fatigue leads to decision avoidance, impulse purchasing, lack of will power, impaired self-regulation and many believe it contributes to a number of psychological issues.

“Our fatigue is often caused not by work, but by worry, frustration and resentment.” – Dale Carnegie.

According to the social psychologist Roy Baumeister, this mental fatigue zaps your will power and decision-making ability. You take short cuts, become angry with others, make impulsive decisions, and stop thinking about the consequences of your action.

Do it when you aren’t tired:
We all function best at certain times of the day. Some people are night owls, some are early risers. You know yourself best and when are your peak hours of productivity. Use that to your advantage not only to be productive but also in making good decisions. Don’t make big decisions when you are tired, hungry or just spent. That is definitely a recipe for disaster. We only have limited energy in our day. Reserve the best part of you for the biggest tasks and the biggest decisions, or the ones that are most important and will impact your life the most.

Reduce decision fatigue – Plan for future decisions:
Plan your day, week, month in advance. Have your daily ’to achieve’ list ready the night before, your Action Plan for the next week ready before the weekend, and your next 30-day strategic growth plan ready before the end of the month – or whatever type of goal achieving system you use – get it done in good time. I have a flashcard above the light switch in my office that reads “Is tomorrow planned?” and I ensure that I’ve planned my day the night before so that when I get into the office the next day, I just get on with those plans without adding to my decision fatigue. That way, you won’t need to make a decision about what to do, you just follow the plan. This also means: make a weekly meal plan so you know what you’re eating, a daily default diary so your time is allocated, and put the ‘’important’ stuff earlier in the day. You will be better prepared to make effective decisions when you wake up.
Take short breaks: If you have to decide later in the day, try taking a power nap before. Like resting a muscle helps a muscle recover, the same applies for your mind. Have regular short breaks and a few longer ones through the day. Eating also helps the mind relax, but remember: poor choice of input will only cause other headaches later. Take a break, have something healthy, and feel your mental energy coming back.

Read this article for more on how to take a restorative power nap: The Reasons for Regular Napping, and the Science to Support It.

Don’t do it on an empty stomach:
Eat first, especially if you are deciding later in the day. Willpower is like a muscle in the body and gets tired when it is overworked without breaks. Research indicates that willpower and self-control need glucose to work. Baumeister and Tierney report that eating 3 meals a day and during breaks rejuvenates willpower and helps us make better choices. Specifically, a low-glycemic diet prevents big spikes in glucose levels because it takes longer for the body to absorb. Healthy glucose levels will reduce decision fatigue.

Establish a routine for making habitual choices:
One of the most important thing you can do to reduce decision fatigue is establish an everyday routine. Select your personal uniform to wear every day. Eat the same type of breakfast. Reduce the number of daily decision-making demands.

Read this article for more on why and how to instal effective routines in your life: Why You Need Routine In Your Life.

Avoid perfectionism:
Make decisions to produce good-enough results instead of impeccable results.  If the task is at 80% for the things not at the top of your list, live with it. Otherwise this perfectionism is nothing more than procrastination. You could always revisit the task at a later date. Ruminating about tasks adds to decision fatigue.

Select the simpler choice every now and then:
Decide upon the alternative that requires the least effort. Try to avoid having to make the decision about what to wear. Small, but it frees up that little space for making other decisions. Save yourself the wasted head space, and use it for something that you can influence.   You can also make simpler choices by having systems in place. For example, I use a system described in David Allen’s book “How to get things done” that involves a tickler file for my paperwork – as a result I never have a big to-do list hanging over my head, I know everything that needs to be done has been worked into my upcoming schedule, it is not contributing to decision fatigue any longer.

Limit the number of options:
Choose among two or three alternatives instead of a large number of picks. Research from Princeton University has suggested that price comparisons during purchasing “depletes behavioural control.” It occurs when someone gives us too many options and we become victims of the shiny object syndrome. We are so focused on the choices in front of us that we forget to make a choice. Remember that not making a choice is a choice.

Don’t get distracted:
Make your decisions in a calm and uncluttered environment. Or at least keep your engagement to a minimum. Like with social media, set the timer for five minutes, then stop browsing when the timer goes off. Or start using an app like Rescue Time to help you recognise what you spend your time doing when online! When out shopping, look at the window displays, but don’t go inside unless you have a specific item on your list. Once you get sucked in, realise you’ve just complicated your life with more decisions. On Facebook for instance, you have to choose what posts to read, what to like, who to comment back to or reply to, we have to resist advertisements that we are bombarded with. At the shop, we have to decide what to try on, do they have this in your size, how many more items are in stock, what colours, styles? These processes can really advance decision fatigue.

Don’t make too many decisions:
The more decisions you make, the more decision fatigue you have.  If a decision is not related to an urgent and important item in your to-do list, ignore it. What to wear, what to take to a meeting, what to eat. Try to simplify life as much as you can and this involves removing the decisions that take up your precious time. It makes mornings so much smoother. Even write out your “To do” list for the next day and start limiting what goes on your to-do list – the way that many people use them is exhausting.   It is so much easier to knock tasks off your list or make big decisions when the little stuff is out of the way.

“Fatigue makes fools of us all. It robs you of your skills and your judgment, and it blinds you to creative solutions. It’s the best-conditioned athlete, not the most talented, who generally wins when the going gets tough.” – Harvey Mackay.

Decision fatigue is a fact of life. Start out by picking a strategy for a week and see what happens. Then move to another strategy. Pretty soon, you will learn how to strengthen your willpower and make better decisions at more times of the day.

Likewise, if you’d like to learn more about self-hypnosis, understand the evidence based principles of it from a scientific perspective and learn how to apply it to many areas of your life while having fun and in a safe environment and have the opportunity to test everything you learn, then come and join me for my one day seminar which does all that and more, have a read here: The Science of Self-Hypnosis Seminar. Alternatively, go grab a copy of my Science of self-hypnosis book. Self-hypnosis will help you to reduce decision fatigue for sure.