Not To Worry: Using Self-Hypnosis To Harness The Power of ‘So What?’ 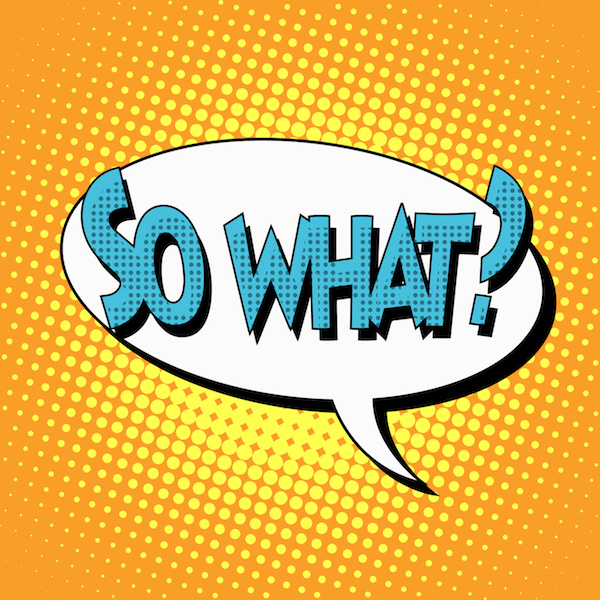 Back in the 1990s, I watched a film with some of my friends that commentated on the ridiculousness of reality TV before reality TV really got big and as it is today. It is not the reality TV reflection that makes this blog entry and self-hypnosis process pertinent to this film, it is the title and attitude of the anti-hero of the film.

The film is called S.F.W (or So F**king What?) and stars Stephen Dorff as Cliff Spab who is a disillusioned young man who becomes a hostage to terrorists at a convenience store. The Terrorist group ask for the entire situation to be broadcast on television so everyone can see how serious they are and many people get killed in the process. After 36 days, Cliff Spab becomes indifferent to the idea of being killed and having taken a bullet for one of the fellow hostages, when he is continually threatened by his captors, he simply says “so f**king what?”

This makes Cliff a media hero, and the film goes into media stardom. However, it is this notion of getting to a stage where something that once terrified and panicked an individual into compliance, avoidance and a frightened existence turns into indifference and a “so f**king what?” attitude, that is what this technique is about today.

A few years back now, I read a great book by John Parkin called “F**k it.” The book featured in news all over the world.

The Times Newspaper once reported that “the F**k It principles comprised of three Eastern principles: Letting go, relaxing, giving up on things.“

On the back cover of the book it says:

Saying Fuck It is like a massage for the mind: relaxing you, releasing tension, allowing you to give up on things that aren’t working. Just starting to say Fuck It can transform your life. And John C. Parkin argues that saying Fuck It is a spiritual act: that it is the perfect western expression of the eastern ideas of letting go, giving up and finding real freedom by realising that things don’t matter so much (if at all). This is the Fuck It way.

John C. Parkin, the son of Anglican preachers, realised that saying Fuck It was as good as all the eastern spiritual practices he’d been studying for 20 years. Having said Fuck It to a top job in London, he escaped to Italy to set up the retreat centre The Hill That Breathes, where he now teaches regular ‘Fuck It Weeks’ with his wife Gaia. He writes regularly on his website (thefuckitway.com) and has been featured on T.V., such as The Graham Norton Show, and in the national press, including The Guardian, TheObserver, The Times, Psychologies, Cosmopolitan and Red Magazine.

It is this idea that I have really enjoyed embracing in a variety of ways in my own life and importantly, in therapy. WHich may sound crazy to some people…

Todays’s self-hypnosis methodology is based on Albert Ellis’ REBT (Rational Emotive Behavioural Therapy) approach and it embraces the notion of simply saying “so what?”

Follow these steps and Use Self-Hypnosis To Harness The Power Of “So What?”

Step One: Before you begin, write up a list of situations or potential occurrences in your life where you think it would be useful and/or beneficial to think and say “So what?” and realise that it does not really matter all that much in reality.

Write up a list with a pen and paper of scenarios or situations in your life that might have caused worry or stress when you think about them.

With the list drawn up, get yourself into a comfortable position where you’ll be undisturbed for the duration of the session. Ideally sat upright with your feet flat on the floor and hands not touching each other. Then move on to the next step.

You can do so by any means you desire or know of. You can use the process in my Science of self-hypnosis book, use the free audio we give away on this website to practice or have a look at the following articles as and when you need them; they are basic processes to help you simply open the door of your mind:

Once you have induced hypnosis, move on to step three.

Step Three: Pick one of the scenes that you wrote on your list and picture it as vividly as you can inside your mind. See the sights, the colours and details of the situation. Notice the shades of light and see the surroundings as clearly as you can. Hear the sounds, those that are near, those that are far away and hear the scenario in as much detail as you can. This is likely to create some feelings, you can notice them, but there is no need to dwell on them, just acknowledge and accept any feelings that come up.

Most important for this step is to engage with the scene and make it vivid. Once you have the scene and situation there in front of you, move on to the next step.

Step Four: As you look at the scene playing out in front of you, say the words “so what?” or “does it really matter?” with as much meaning and commitment as possible. Really say it in a manner that is undeniably convincing to you “so what?”

At this stage, use whatever trivialising comments you can think of to react to the scene before you. You might even want to see the words “so what?” in huge letters inside your mind too, you might want to even say it out loud too. At the very least, say those words loudly and surely inside your mind.

Once you have repeatedly said those terms over and over, start to notice the old worry dissipate. Start to imagine that any unwanted feelings attached to the imagined scene are not starting to wither and deplete and your sttitude is one of strength and mental calmness.

Once you start top notice a change in your feelings, move on to the next step.

Step Five: You now engage in some progressive relaxation whilst repeating the words and sentiment “so what?”

Allow yourself to relax deeper. Engage in some progressive relaxation while you have that scene in front of you and you are repeating the words “so what?”

You can do this in a number of ways…

There are many, many other ways to use progressive relaxation. Just use whatever process you know of to deeply relax and allow your body to be more and more relaxed as you watch the scene and repeat your trivialising comments and new feelings towards the scene.

Once you have fully relaxed, clear your mind of that scene and move on to the next step.

Step Six: Now move on to the next item on your list and repeat steps 3-5 for as many of the items as you wish for this session. Once you have done that, move on to the final step.

Step Seven: Take a couple of nice deep breaths, wiggle your fingers and toes and open your eyes.

Reflect upon the session for a few moments and allow what you have learnt and experienced to influence your thoughts and feelings and go about your day with a renewed sense of freedom and easeso  of mind.

Sometimes we catastrophise, we worry and get ourselves stressed which does nothing to help us. If we are experiencing worry or unnecessary stress, then this approach can really help to let go of what is unwanted and non-useful.