How to Effectively Make Your Point and Win More Arguments 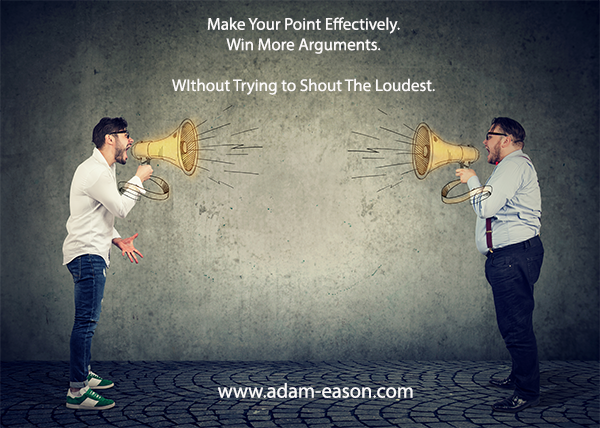 How do you win more arguments? Well, as tends to happen within my professional field, it is not all about shouting the loudest or refusing to listen to contrasting perspectives – when you learn to make your point more effectively, you benefit in a variety of ways and that is really what I’m writing about today.

We all experience situations that have some sort of conflict. Especially with there being so much online discussion and debate these days, and especially when so much interpretation of the written word can occur. Many times, people are locked in position, where both sides stick to their version or demands and will not agree to any less than what is acceptable to them. Many times, one side is unreasonable and often both are.

This might happen at work, at home, at school, while shopping, or any number of other life situations, as well as the afore mention online discussions. To win any argument, or make your point effectively, the conflict involved needs to be resolved. To resolve a conflict, it is of utmost importance to (at least attempt to) understand what causes any conflict, and what can be done to bring a positive change to the situation.

What causes conflict? Many people typically tend to think that conflict arises from disagreement, discord, or difference in belief or opinion. Though these are symptoms, they are not necessarily the underlying cause. So, you might ask then what is the cause? The human brain has a very powerful mechanism of interpreting all of its experiences, and this mechanism is perception. How we perceive a set of events today determines how we will react to events of similar nature in the future. Since there are never truly identical situations in life, our perception of the situation is simply a perception at the most. As is often stated in a number of ways in the field of personal development – Perception is not reality, it is only a view of the reality.

This article title mentions you can “win more arguments”…..When I write about winning an argument here in this article, it is not about coming away exclusively victorious, or point scoring – it is about making your point effectively, having your say, and doing your best for your point to be understood, taken on board and fully received. Sometimes, winning an argument might even be letting another individual believe they have been heard, understood, or even that they’ve “won” the argument themselves. Not all discussions and arguments are like the school debating club whereby a victor is voted upon.   There are many types of arguments, and all of them involve some type of escalation between opposing opinions and points of view. Here are some strategies you could apply to make your point effectively and even win more arguments:

1. Actively Listen:
Listening to the other person can lessen the prospect of losing an argument or not making your point effectively. Sometimes people value being heard over being right. Take your time for working out what you are going to say next – when you actively listen, you actually spend time tuning into the other person and what they are saying, without too much thought about your response because if you are just working out your response, you are not truly listening. Be patient with your responses, and you can even work out if your response is necessary, and if it is likely to help you with your argument.

2. Stay Curious:
Closely related to listening effectively, be curious throughout and look to learn and develop yourself throughout the debate or argument. According to research, invoking your own natural curiosity helps you improve your mood and creativity. A study from the journal Neuron, indicates that our brains experience a change in chemistry when we become curious. And it helps you learn better and retain more information.

“Be calm in arguing for fierceness makes error a fault and truth discourtesy.” – George Herbert.

3. Do Not Attack:
Attacking someone else’s idea puts them into a fight-or-flight mindset. Remember the advice of Sun Tzu, an ancient Chinese treatise —break down the enemy’s resistance without fighting.

“If you go in for argument, take care of your temper. Your logic, if you have any, will take care of itself.” –Joseph Farrell.

I have written before and discussed in detail the way that many people discuss and argue in the hypnotherapy field, and I have even written about the use of logical fallacy to win more arguments here, go have a read:  Why All Hypnotherapists Should Be Able To Spot Logical Fallacies.

4. Be Friendly and Respectful:
When you make your point in a very friendly manner, you automatically disarm others. It also keeps them from going for a defensive stance or position. It’ll help them ease off on digging their heels in and becoming even more entrenched in their own position.

Make an effort to respect the other person’s point of view, no matter how ridiculous it sounds to you. I add this next quote, with a little bit of tongue-in-cheek…..

“I never make the mistake of arguing with people for whose opinions I have no respect.” – Edward Gibbon.

5. Ask Open-Ended Questions:
These types of questions allow the other person to explain themselves and not box them into a “right or wrong” answer. It encourages interaction and discussions. All involved will benefit and become enriched as a result.

“Argument is meant to reveal the truth, not to create it.” – Edward de Bono.

You can start to seek out other types of questioning techniques that seek out logic, evidence, and aim to separate the points being made from much of the faff and waffle that can occur, such as Socratic questions which I teach to our student hypnotherapists because of their value in therapy.

6. Argue the Facts:
If you read the previously mentioned article explaining logical fallacy, you’ll understand the need for this one. One of the worst things you can do during an argument is base your conversation around your feelings alone. Present the facts but use mental toughness to control your emotions. Be objective where possible rather than descending into emotional reasoning – it is good to wear your heart on your sleeve on occasions, but do not led your argument be led by your feelings alone.

In order to make your point well and effectively argue, you’ll benefit from keeping a strong mind. Strong minds win more arguments. Strong minds tend to have emotional intelligence which means emotions are being controlled rather than letting emotions take control. If you watch good television debates with major thinkers of our time, you’ll see them remain cool and objective when debating and arguing.

7. Ask How, Not Why:
Asking “how” their statement is right, examines the process and more often than not, the objective components of their argument, rather than asking them “why” it is right which often contains more emotive reasoning which the other person leaps to defend or can take more personally. When someone tells you why they are right and you are wrong, it will make them more confident in their convictions. Asking them how will tend to bring them out of their emotional position and into their thinking, more cerebral position.

8. Concede:
One of the most effective ways to defang an argument in its tracks is to say, “You are right.” This does not mean you are forfeiting your point of view, but it does mean that you are acknowledging that they have a valid point.

“The most important thing in an argument, next to being right, is to leave an escape hatch for your opponent, so that he can gracefully swing over to your side without too much apparent loss of face.” –Sydney J. Harris  .

You can effectively highlight strong elements of their argument, champion valid points being made and still win more arguments when you do so.

9. Stay on Point:
When emotions are high, logic is often thrown out the window. Do not be that person! Do not respond to irrational and/or emotional appeals of the other person either, especially if they threaten to derail the main point of the conversation. This will not help you to win more arguments.

If needed, you can say, “Interesting point and we can talk about that later, but right now we’re discussing…” or something to that effect, in reply to anything which has a seeming non-sequitir direction to it.

10. Use Data:
Support your points with neutral and objective data or studies. When talking, writing, or consulting about how to develop a mentally tough mind that can create breakthroughs, you can back up your assertions with data.

If you want to be taken seriously and win more arguments, use information that has credibility and is backed by research. Do not just offer a YouTube clip of some guy asserting a strong opinion, use what you can to effectively and empirically support your position and give strength to your position and point.

“Arguments are to be avoided, they are always vulgar and often convincing.” – Oscar Wilde.

Cultivating the art of the argument will help make you more persuasive and build your personal base of power yet many people shy away from the potential conflict. It is important as a means of learning more about your subject, and being able to demonstrate expertise if that is ever important to you or your profession, for example. Choose wisely when to engage, practice the art of arguing well and you will win more arguments and make your points more effectively.

One of the main reasons I started my podcast was that I found so much endless bickering and problematic argumentation on forums in the hypnotherapy field whereby nothing was achieved, no progress was made, and it just kept people in the same camps defending the same points and positions without ever welcoming anything that did not fit their stance. In my advanced hypnotherapy course, I teach our students, qualified hypnotherapists, how to engage in academic argumentation in order to advance the way that they understand the literature and explore the field. As much as possible though, the podcast, as well as therapeutic debates with clients, should aim and seek to create win/win situations where all involved become more enlightened. I think that is a key point if you want to win more arguments, for sure.

Do not just get drawn into shouting the loudest….. Stay classy in order to win more arguments.