Why All Hypnotherapists Should Be Able To Spot Logical Fallacies 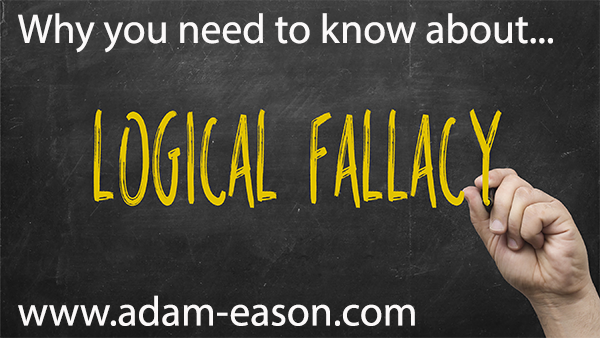 Logical fallacies – my topic today…. People in the field of hypnotherapy often argue with each other in the most pathetic and limited ways. What a lovely opening sentence, eh? Those pathetic, limited and ill-informed ways are the subject of todays blog entry. Let me explain…

In a short while I begin day three of my current intensive hypnotherapy training diploma course… On day one in conversation, I mentioned a couple of things… One was logical fallacies and another I referred to as a Straw man argument… One of the students came and asked me about them both later on and we had a discussion about it… Then yesterday morning while waiting for the other students to arrive, I got discussing a subject with a couple of the guys… How I get lots of (what I consider to be) poorly trained and ill-equipped hypnotherapists upset with the things I write and because they do not know the way to argue against it, they start to be rude towards me, rather than demonstrating any capacity to actually present their side of the debate… often because the way they believe lacks proper evidence to support it… It is easy then to just lash out at the author of the statement, they are (and often, I am) an easy target…

In the field of hypnotherapy, if you’ve ever had a conversation with anyone who truly advocates and believes in the therapeutic use of past life regression, the law of attraction, energy based therapies or certain facets of NLP, let alone some stances on what hypnosis is, whether an unconscious mind exists or not, or about people’s paranormal or pseudoscientific beliefs, you are sure to have been on the receiving end, or witnessed a logical fallacy or two being used. Certain belief systems cannot be defended or supported by science or empirical evidence, and so the people espousing those beliefs tend to look for other ways of substantiating their claims. Usually using logical fallacies. This blog entry is going to illustrate a number of those ways. I think you’ll recognise one or two at the very least….

Firstly, we have ad hominem
This is an attack made on the arguer rather than on the argument. It is one of the most common logical fallacies, though it is not necessarily where someone just calls you names, although I have had that, but ad hominem is whereby a theory is discarded not because of any evidence against it or lack of evidence for it, but because of the person who argues for it.

A: Highly accredited training schools should not include past life regression in their hypnotherapy training curriculum.
B: Nonsense. You say that because you have a closed mind and are not spiritual.

Secondly, there is ad ignorantiam (appeal to ignorance)
One of the classic logical fallacies whereby the truth of a claim is established only on the basis of lack of evidence against it, this is basically whereby someone says something is true, because there is no evidence to prove it is not.

A simple obvious example of such fallacy is to argue that past lives definitely occur because there is no evidence to prove they do not. People ignore the fact that when using hypnosis to encounter these past lives, the person never speaks the latin language or the ancient African dialect of the time whilst reliving it, for example.

ad populum (appeal to popularity)
The truth of a claim is established only on the basis of its popularity and familiarity. Surely you have heard of books that you are told to buy because they are bestsellers – logical fallacies like this are used often in sales or whereby someone tries to make something seem more credible because it is popular.

“I bought that NLP book because everyone in my class said it was good.”
“Over 200,000 people have watched that YouTube clip, which shows it is right.”

Anecdotal Evidence
One of the most common ways that people attempt to rubbish my desire for evidence of past lives, or the existence of the unconscious mind, or that NLP’s eye accessing cues work the same for everyone, for example… is through the misuse of anecdotal evidence. Yesterday on my diploma I joked about how many detox diets made claims about the plaque-like build up inside people’s colon being dispelled and someone jumped in to defend it with personal anecdotal evidence. Anecdotal evidence is information that cannot be tested scientifically. In practice this usually refers to personal testimonials and verbal reports. Anecdotal evidence logical fallacies often sound compelling because they can be more personal and captivating than cold, uninteresting factual evidence.

“I know for a fact that past lives exist. My friend, who is a very reliable person, has experienced his past lives on many occasions.”
“Hypnosis can be used to enhance the size of mens penis’s, as I read an anonymous testimonial at a website showing it to be true.”

When anecdotes are presented as evidence or in place of evidence, you have very good reason to apply some critical thinking to it or offer up some healthy scepticism.

Appeal to Authority
This type of argument refers to a special authoritative source as validation for the claim being made. Every time you see an advertisement featuring someone wearing a white lab coat, or telling you what 8 out of 10 doctors think, you’re witnessing an appeal to authority.

“My hypnotherapy teacher taught me that past life regression is a good therapeutic tool, that shows it is so.”
“Mesmerism is valid to the field of hypnosis because it’s based on centuries-old theory.”
“The dark arts of ancient mystics show the true power of what can be done with hypnosis.”
“A growing number of scientists say that hypnosis shows changes in the brain.”
“The Hypnotherapy Journal of the Hypnotherapy Association says that Adam Eason’s book on Self-Hypnosis is a must-read for any hypnotherapist.”

Here people use perceived authority, as support for the argument. Any theory really needs to be able to stand on its own two feet with or without the support of an authority figure.

Complex question or loaded question
A question is posed in such a way that a person, no matter what answer he/she gives to the question, will inevitably commit him/herself to some other claim, which should not be presupposed in the context in question.

Paul McKenna says that he refused to accept an invite to a radio show entitled “what are the dangers of hypnosis?” I don’t blame him. An entire show seems to have its focus on finding the dangers rather than the benefits or correct sphere of competence.

In NLP schools, and Erickson styled teachings, therapists and practitioners are often encouraged to ask loaded questions to induce hypnosis, so it is no wonder we find these being used…

Non sequitur
This is whereby a seemingly nonsensical conclusion is drawn from an irrelevant premise. This is typical of someone arguing their point poorly.

From the Latin for “It does not follow”, a non-sequitur starts with a reasonable sounding premise that the user wants you to agree with, and they then attach it to a conclusion that is just downright irrelevant. The sentences are often phrased in such a way that it seems like you have to accept both or neither:

“Pharmaceutical corporations are evil, thus hypnosis is good.” (I encounter so many hypnotherapists who believe Big Pharma is out to get them?!)
“Allah is great, thus all Christians are evil-doers.”

For example, in a hypnosis debate as to whether the unconscious mind exists, some hypnotherapists might argue that believing in an unconscious mind is actually a useful way to explain hypnosis to clients… Which is exactly what I do… I wanted to show I am not without sin when it comes to logical fallacies.

This is an example of a red herring since whether the unconscious mind is a useful metaphor or not, is irrelevant to the question of the existence of an unconscious mind. The usefulness of a belief is not a reason for thinking that the belief is true.

Finally, I give you the incredibly commonly used…

Straw man
This is all about attacking an opponent by attributing to him/her an implausible position that is easily defeated when this is not actually the opponent’s position.

This is where you state your position, and your opponent replies not to what you said, but to an exaggerated and distorted caricature of what you said that’s obviously harder to defend.

Person A says: “Hypnotherapy Schools should teach evidence based methodologies.”
Person B replies: “Evidence based techniques would destroy the field of psychoanalytical hypnotherapy.”

Well, maybe person B is right in that it would change the field as we know it, but it is not relevant, because “destroying the field of psycholanalytical hypnotherapy” is not what person A was talking about in the first place at all! In fact person B did not refute person A’s point at all — he invented a different point that was easier to argue against. He created a straw man — one of those dummies stuffed with straw that soldiers used to use for bayonet practice in the olden days. The Straw man is too weak to fight back.

So there you go… A list of some common logical fallacies that people use to argue their point when they are not beholdent of enouogh information or evidence to support their argument or stance… So the next time you see someone attacking the arguer instead of offering up a salient point… Look closer at what is going on.

Have a marvellous day… I have a training course to run.