How to Stop Bragging and Be More Humble 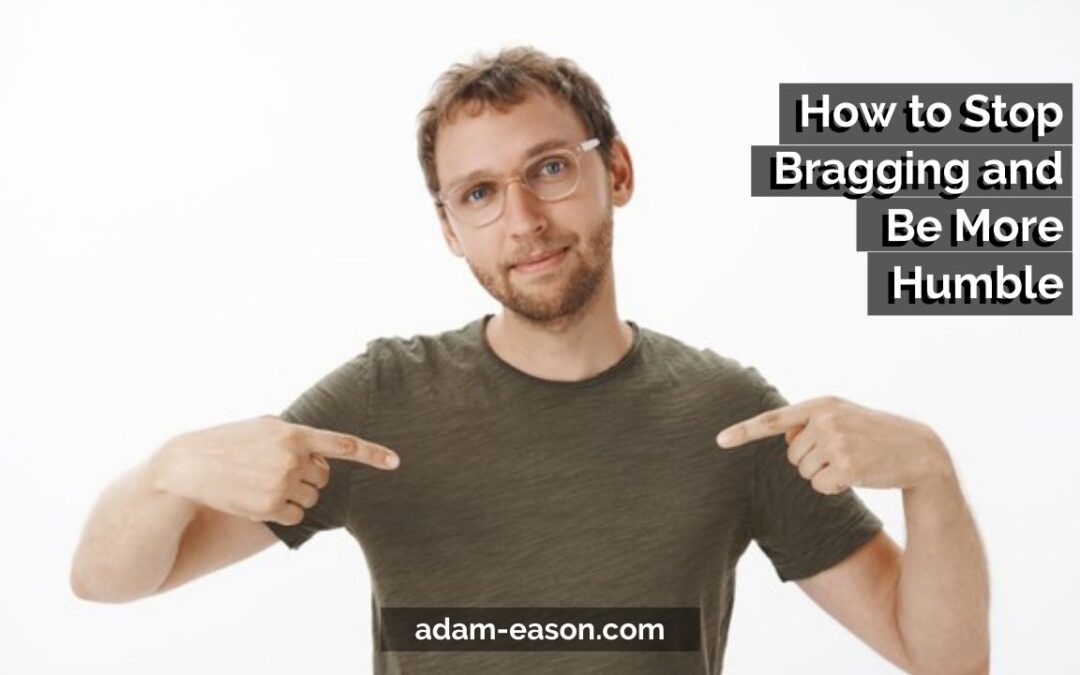 A famous man one said “I’m a stable genius” on Twitter….

“Bragging about yourself violates norms of modesty and politeness – and if you were really competent, your work would speak for itself.” –  Adam Grant

These days, on all forms of social media not just Twitter, you can find plenty of self-proclaimed experts, thought leaders, trendsetters, and influencers. Many of whom possess a sort of self-absorbed, self-promotion, that many find to be incredibly annoying.

Then there’s the other types of people who spend as much (if not more) time bragging about how busy they are than they are actually getting things done. We all have things that keep us occupied – whether it be professional or personl, or a combination of both. But are we really all living lives that don’t give us a single second to sit down and breathe? Probably not.

Many of us, it seems, constantly battle with the feeling we’re not good enough, and feeling absolutely unappreciated. The feeling of insecurity that accompanies such a state of mind is almost universal, no matter at what scale, especially when one is young. Some attempt to rectify that by being vocal about their accomplishments.

For many people, accomplishments have no value unless they impress their peers. It’s really just an attempt to make ourselves relevant and seemingly indispensable, a very basic human need. I have fallen foul of this myself, I am guessing we all have to some degree – developing our self-worth from what is seen as the appreciation and admiration of others as they react to our accomplishments.

It is perfectly okay to rejoice in your achievements or some new life events. It is important to value the awesome things you do. It can become a problem when you draw all that attention to yourself and bask in it too much. Constantly talking about yourself may also become a problem.  To the point that it almost becomes a monologue vs dialogue. We run the risk of narcissism or too much self-indulgence which can cause us and others problems.

Listing your achievements is ok, particularly if someone asked you to list your achievements. Bragging about achievements before you’ve achieved them is not really ok though. Being proud of what you are capable of is ok – as long as that is shown in the capability and the actions rather than the stories about capabilities and actions.

“ He who is humble is confident and wise. He who brags is insecure and lacking.” – Lisa Edmondson

Bragging is one of the most unproductive things to do, it doesn’t give anyone else anything, it is an egotistical narcissistic waste of time. And real achievers don’t have to. Usain Bolt doesn’t only talk about being the fastest human ever, he does not need to brag, his accomplishments speak for him. Bragging is like fishing for a compliment with dynamite.

Bragging is often an antisocial thing. It often makes people miserable and lonely. People who brag may think it makes them look good, but it actually does the opposite.  A 2015 study from City University London, Carnegie Mellon University and Bocconi University  shows that self-promotion or a “humblebrag” often backfires.

The opposite of bragging is humility.

“Bragging is probably just the tip of the iceberg of the self-destructive things we do in the service of self-promotion.” — George Loewenstein

Humility improves your ability to relate with those around you. There are many attributes of humble people. But among these many important attributes, the value of humility seems to be consistently overlooked. Part of this is due to common misconceptions about what humility is and what it means to be humble. In reality, however, humility is one attribute that everyone should have.

Part of the reason humility tends to be overlooked in everyday life is that it is frequently misconstrued as a “weak” attribute. We have been led to believe that people who are humble are easily bulldozed by others and aren’t willing to stick up for themselves. Many define humility as having a low opinion of oneself.

While this may be one widely accepted view of humility today, it is actually a far cry from the true meaning of the word — and the way it should be applied in everyday life. Humility isn’t about being passive and weak. It’s about showing respect and recognising the truth in as many aspects of life as possible.

In contrast to the idea of humility as weakness, the Merriam-Webster dictionary defines the word as “freedom from pride or arrogance.” In fact, it is listed as an antonym for words like “egoism,” “conceit” and “superiority.”

As C.S. Lewis so beautifully puts it:

When it comes to respecting people, so often we look for those with shining achievements on paper. Ultimately, we’re similar to a magpie or a barracuda: We are attracted to all the shiny things.

But in the weeds of a crisis, challenge, or turmoil, all of the experience in the world loses value without humility.

Psychological research, such as this enlightening 2020 study by Stanley, Sinclair and Seli, reveals that intellectual humility actually leads to a multitude of other positive – and some surprising – traits, including honesty, fairness, authenticity, openness to new ideas, and even the ability to make better decisions during a crisis.

In fact, the study refers to intellectual humility as ‘… something of a wallflower among personality traits, receiving far less scholarly attention than such brash qualities as egotism or hostility.’

Being humble will make you a better listener. It will make you question vanity metrics and celebrate meaningful ones. It will lend your story credibility. A 2012 study by Davis and colleagues   found that humility helps to repair relationships and built stronger bonds between people. This is because humble people are more likely to accept other people for who they are.

Humility isn’t a trait you are born with. It’s something you practice. So in the middle of reading all the blog posts, articles and books about self-discovery and self-improvement and self-help, consider including working on increasing humility and reducing your bragging. Here are some ways to do that.

Seems obvious. Humble people don’t just give advice, they take it too. They actively make others feel as if you are listening to them, not just the other way around. They don’t listen just to respond. They actually listen actively to what the person is saying without thinking about what they are going to say themselves next as soon as they get the chance to butt in.

And be open to hearing different perspectives. Listen to and respect other people’s opinions, even if they conflict with your own. Do not put down their opinions. When you speak with a person, avoid giving brash opinions, unless they are specifically being asked for. You can still offer your own side and your own case with conviction while demonstrating you have also taken on board and sought to understand their position.

When you ask others what they think, they feel their opinion is valued. And frankly, there are few greater feelings than that. Asking for feedback means healthy communication – something all humble people are masters in. Others may spot something you have missed, and giving them a chance to tell you whether something is good or not, helps you develop effectively and accordingly.

“Very simply, gratitude can make us less self-focused and more focused on those around us–a hallmark of humble people,” says Vicki Zakrzewski, education director at the University of California-Berkeley’s Greater Good Center.

You will never become humble if you don’t start appreciating the things you have. No matter how much you have, always make sure you are grateful. Spend three minutes every morning (or evening, or any other time!) to think of all the things you are grateful for, such as a wonderful family, home, parents, business partner, having choices, or just the wonderful dimples in your cheeks when you smile. Realise what matters and do not take what you have for granted.

Gratitude not only generates humility, but it’s also a great source of self-esteem. Gratitude means appreciating all of your qualities, attributes, and abilities. Being grateful results in more meaningful relationships and produces a greater sense of belonging — both of which build self-confidence. Read this excellent article more on this: The Science of Gratitude.

Admit you don’t know everything:

Did you know that you can actually say “I don’t know” when you really don’t, and not have people looking at you with disgust? Well, you can, and you should. Admitting you do not know something or that you don’t know how to do something does not make you a bad person. It makes you fearless, honest and realistic – something humble people almost always are.

Ambiguity and uncertainty are part of everyday life. So why not embrace them? When we humbly admit that we don’t have all the answers, we create space for others to step forward and offer help. We also engender a sense of interdependence. Others will understand that the best bet is to rely on each other in uncertain times.

Don’t have any hidden motives, such as using somebody for your own personal gain. People hate this, as it makes them think that you are implying that you are better than them.

Read this article for more on this topic: Why and How to Be Authentic In Everyday Life.

No doubt humility can be a great virtue, but can you have too much of it?

Is it possible to be too humble?

The answer is probably yes. Maybe being too humble is a bad thing. That is because…

The balance between being humble and being too humble is both interesting and challenging. Finding that fine line between modesty and being overly presumptuous is a phenomenon that varies for all of us. However, do not allow the concept of being humble to set you up to be overlooked. There is no shame in healthily reminding people what you’re good at, what you’ve accomplished, and ultimately, what sets you apart from everyone else.

Self-promotion can definitely be a good thing in some cases. You now have a rough framework to move forward and start to master the art of being humble and stopping bragging. What are you waiting for?