How to Recognise and Deal with a Sycophant 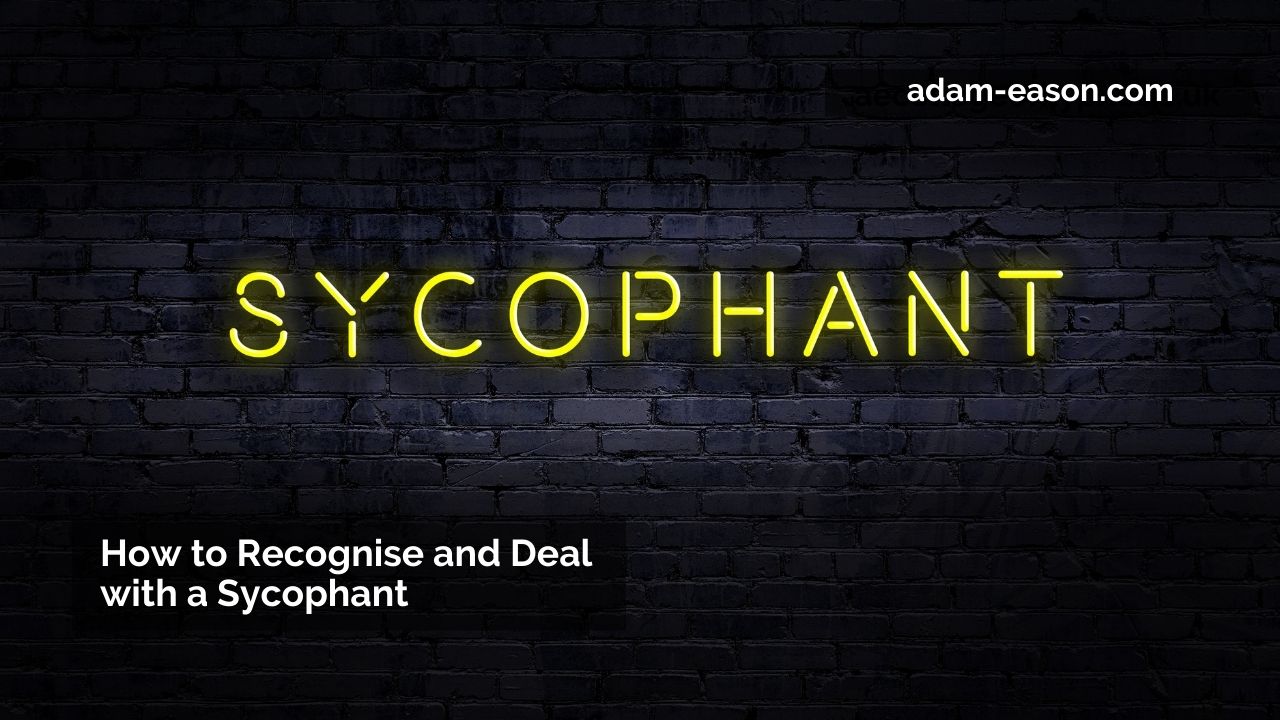 “Whenever you commend, add your reasons for doing so; it is this which distinguishes the approbation of a man of sense from the flattery of sycophants and admiration of fools.” – Richard Steele

Sycophancy is flattery that is very obedient, or an indication of deference to another, to an excessive or servile degree. A user of sycophancy is referred to as a sycophant or a “yes-man” (or sometimes ‘a suck-up’). The adjective sycophantic is perfect for describing someone who uses flattery to get what they want, many a time in an unethical fashion. According to the Merriam-Webster dictionary, a sycophant as a person who praises powerful people in order to get their approval. The web-based Dictionary.com defines sycophancy as self-seeking or servile flattery.

Sycophants use artificially flavoured hollow comments that are meant to give their superiors an ego massage. This could easily please someone who looks forward to such behaviours from people around them. Therefore, sycophancy not only undermines the dignity of those who give it but confers no meaningful benefit on its recipients. Its prevalence should be seen as harmful and outdated by everyone. According to a research by Oregon State University, sycophancy and kowtowing can really sap energy leading to a drop in efficiency and a tendency towards irritability.

There is a big difference between displays of appreciation and greetings that are given voluntarily and subservient actions that are imposed. Sycophantic behaviour only serves to reinforce outdated social attitudes and can enable more harmful acts to people and society.

Independence of thinking should be celebrated and encouraged, I write and speak on that topic (and related topics) often. Often, the people who really make a difference in society are often those who don’t quite fit in. The ones who don’t act in the same way as everyone else and take risks rather than following the status quo. Here are a couple of great articles on thos topics if you wish to delve further:
– How to Express Your Individuality.
– How to Think Outside the Box.

So it is important to learn more about the sycophantic behaviours, and how to stop being a sycophant.

“Having a relationship with people of questionable character is like playing with a razor blade on your skin, and pretending to observe that it is harmful to your body.” ― Michael Bassey Johnson

Here are 5 things sycophantic people tend to do:

1. They Do Not Usually Respect Other People’s Time

These are the people who have very little awareness of time management or oblivion to the needs of others. They often pretend to be very busy and don’t respect other people’s time.

These people are not usually very interested in the needs of others. They often pretend to listen and their nod to you is to be taken, as a sign of I will Do – IF I Want To. They don’t really want to help others but are fearful to say this out loud or to people’s faces. They typically aren’t concerned with what other people are going through, but they want others to be very concerned about what they’ve got going on.

3. They Are Usually Incompetent

If something good happens, they’re not the first to applaud–or at the very least, ready to acknowledge. They are often found to be making mistakes but always feel they couldn’t have possibly done anything wrong! They live with the perpetual belief that all mistakes happen separately from themselves.

4. They Take More Than They Can Chew

On the flip-side, they accept everything thrown at them. They virtually Never Say NO! They want everyone to know how important they are –and will gladly make it known to the collective.

5. They Tend to Think of Their Own Advantage

We know that keeping things simple always works but sycophants, on the contrary, are always trying to impress someone or the other to suit their best interest so by doing so they actually complicate everything for themselves.

6. Agree To Their Own Advantage

This is the most common one…. They tend to agree with people as a way of garnering the relationship and being liked or winning favour with that individual. They may even change their mind as a means of keeping in agreement with someone (even if they do not actually agree inside themselves).

A couple of years ago, I read an article on Psychology Today by Deborah and Mark Parker that opened with a story that I’d like to open with here too….

One day, when Sultan Mahmud who reigned 998-1010, was hungry, he was brought a dish of eggplant (that’s aubergine to us Brits). He liked it very much and said, “Eggplant is an excellent food.” A courtier began to praise the eggplant with great eloquence. When the sultan grew tired of the dish, he said, “Eggplant is a very harmful thing,” whereupon the courtier began to speak in hyperbole of the harmful qualities of the eggplant. “Man alive,” said the sultan, “have you not just uttered the praises of the eggplant?” “Yes,” said the courtier, “but I am your courtier and not the eggplant’s courtier.”

We all recognise in this Middle Eastern tale the smarmy practices of a toady. It is key for us all to be able to tell a flatterer from a true friend.

These behaviours can lead to some serious issues for both sycophants and people around them.

•           Sycophants often lack self-confidence and self-belief, which can lead to mistakes, poor judgements, or something embarrassing, and can effect the people around them.

•           They become easily stressed. With too many responsibilities and lots of people relying on the person, stress can easily creep in and rise easily.

•           When someone says yes to everything and they can eventually run out of resources to deliver.

“I would rather a thousand times be a free soul in jail than to be a sycophant and coward in the streets.” – Eugene V. Debs

Tips to Deal with a Sycophant:

Different personality traits and characteristics can teach us lessons in life. In the case of sycophants and a fawner, you need to be careful. Don’t try to avoid them in the first place. Just be honest, understanding and accepting with yourself. It will help build your persona to a high calibre.

As far as dealing with a sycophant goes, don’t try to be overactive in deciding things (or judging too harshly). Just observe the moves and if you find something nasty or unhealthy just avoid in the best possible way, or whatever way is responsible and healthy for you.

If we accept the premise that the praise given is unmerited, you could just ignore it. More usefully, perhaps, you could try to understand what the sycophants are trying to get. Most sycophants are looking for approval or security. You might let them know that they will get neither if you don’t think they are being honest with you (explained kindly and appropriately of course).

Make sure that the praise doesn’t have merit before judging or deciding. Take an honest look at your effort and performance and compare it with what might be expected. Be prepared to accept a little praise. Even if it is difficult sometimes!

When you become wise to it, such praise will not affect you, instead, it can boost your spirit since you already know what you are capable of and failure for you is not a moment of embarrassment but another chance to learn.

“Some, I verily believe, delight to be slave-men; it is a joy to them, and they would not change their condition; not only miserable village wretches but men in a good position, well-to-do sycophants.” – Richard Jefferies