How To Raise Your Conscientiousness 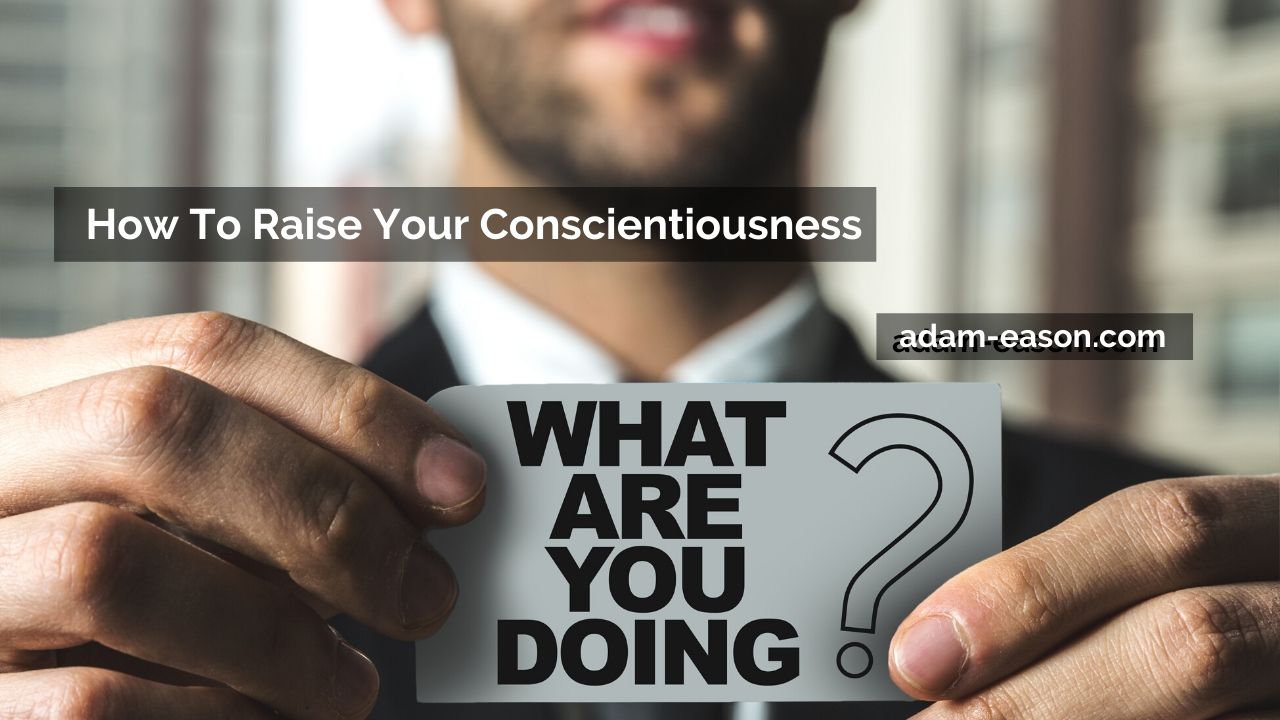 It seems to me that conscientiousness is needed more than ever in the world right now.

“Very few things happen at the right time, and the rest do not happen at all. The conscientious historian will correct these defects.” –  Herodotus

If you were to improve just one characteristic to improve your overall life quality – what should you focus on? More than most other things, it is the richness and quality of our relationships that is the best indicator of sustained happiness and health. The word success should really be relegated to a relative and subjective term that has little currency, the research team at Harvard use another term instead; Life Course Functioning. According to the study, the characteristic that presents itself that is the best indicator of Life Course Functioning it is conscientiousness.

“Conscientious people are apt to see their duty in that which is the most painful course.” – George Eliot.

What exactly does the researcher mean by conscientiousness? According to Psychology Today, Conscientiousness is a fundamental personality trait—one of the Big Five—that reflects the tendency to be responsible, organised, hard-working, goal-directed, and to adhere to norms and rules. It is the capacity for self-motivation, organisation and planning.

It includes characteristic such as being efficient, effective, neat, and systematic, also including such elements as self-discipline, carefulness, thoroughness, self-organisation, deliberation (the tendency to think carefully before acting), and need for achievement. Conscientious individuals are generally hard working and reliable.

“People high in conscientiousness get better grades in high school and college; they commit fewer crimes; and they stay married longer.” –  Paul Tough.

Why conscientiousness people are so successful

Conscientiousness people are successful because of certain key character traits:

Can conscientiousness traits be created?

Studies such as the previously mentioned one entitled “Genetic Basis of Traits” have shown that personality traits are about half attributable to genetics, and half to the environment or to developmental factors. So there are ways to change your personalities, through self-development, organisational events and processes, and external events.

“Self-discipline, although difficult, and not always easy while combating negative emotions, should be a defensive measure. At least we will be able to prevent the advent of negative conduct dominated by negative emotion. That is ‘shila’, or moral ethics. Once we develop this by familiarizing ourselves with it, along with mindfulness and conscientiousness, eventually that pattern and way of life will become a part of our own life.” – Dalai Lama.

How to raise your conscientiousness

Conscientiousness comes when the value of doing something well and the purpose of practicing it becomes understood. It relies on being able to delay gratification and recognise that improvement comes with work that may not always be enjoyable, but the rewards of that work will be.

Conscientiousness also comes when personal responsibility is taken to achieve targets that you have set yourself. Like many of life’s most important lessons, conscientiousness is something that needs to be learned over time rather than taught.

A research group from the US has looked across a broad set of data – a so-called “mega-analysis” of over 2000 people spanning six years – to see whether having a goal or desire, to change your personality one way or another, actually results in a change in your personality in the way you desire. And what they found was that the answer was yes. Setting goals and desires about how you want your personality to be – such as wanting to be more extroverted, conscientious, or agreeable – robustly predicted a corresponding growth in that particular personality trait. And this was shown to be applicable for all five personality traits. So it didn’t really matter which one you wanted to change, the evidence suggests it is possible to do so.

“Nothing in the world is more dangerous than sincere ignorance and conscientious stupidity.” –  Martin Luther King, Jr.

Trying to change the habits of a lifetime can be tough, which is why it’s important to set reminders of the times that you’ve committed to improving your conscientiousness. Let’s say you’ve set a goal to read for one hour per day. Set the time aside on your calendar and treat it like an important appointment, such as going to the doctors or attending a job interview. By treating this as time of utmost importance – something that’s going to add enormous value to your development – it will help you to cultivate a new behaviour that will become a productive habit.

Focus on the specifics

If someone were to say to you, “Just be more conscientious!” you might be confused by such broad advice. Think of it in the same way as fitness. If someone tells you to become more fit – to set that as your goal – it doesn’t really help much. On the other hand, if someone says, “If you commit to running 1.5k four times a week for a month, you’ll begin to see improvements”, that gives you something to aim for. Therefore, set specific goals such as “For the next month, I’m going to reduce my social media use by one hour per day and devote that time to reading/mastering a new skill/learning how to start an online business.” Taking that one step at a time has already increased your productivity rate by seven hours every week, and that’s a great start that you can then build on as you become more focused.

Be open to challenges

Responsibility, delayed gratification, hard work, intrinsic motivation and conscientiousness are real challenges for most of us. Responsibility can only be learned if you take more responsibilities. Delayed gratification has to be experienced. Hard work has to be engaged in. Intrinsic motivation is something that can only be found if someone is left alone with themselves for long enough to find it.

No one gets better at something just by expecting to be better (though positive expectation will help); they need well-planned tasks and activities through which they can practice the skills that deliver real-time feedback. It took artists centuries to develop perspective to give depth and reality to their work, but a good art and design teacher will plan activities through which their students draw their way into understanding perspective in a few weeks. This is a process and it is a process whereby more is being taught than perspective.

To help you become conscientious you have to take responsibility and gather experiences that happen over enough time to practice delayed gratification.

Oftentimes, when we set ourselves a new goal to work towards, we fail in our endeavours. In many cases, this is because we keep our goals private, which limits the accountability to the very person who might procrastinate on our goals…ourselves. By telling a few close friends or family members of our intentions – and asking them to help keep us accountable – they can help to minimise distractions and keep us focused by providing support and the occasional morale boost when it’s needed. After all, we don’t want to let down the people who are there for us, and so we’re much more likely to stick to the commitment of improving ourselves when others are in on it.

One of the reasons people give up while attempting to create changes in their lifestyle is because they feel like they have to push themselves all the way without stopping. In other words, they don’t celebrate the small victories along the way, and that’s a vital component of maintaining your enthusiasm. Self-improvement of any kind should be seen as an investment in yourself, not a chore, so remember to reward yourself. For example, you could approach your goal through the Pomodoro Technique, or you could reward yourself whenever you recognise positive progress. Let’s say you’ve managed to cut out seven hours’ worth of unnecessary social media scrolling in a week. You could reward yourself by doing something you enjoy, such as treating yourself to your favourite dessert. The important thing here is to create positive associations with the efforts you’re making, which will increase the likelihood of staying the course, rather than feeling that your new lifestyle change is based on sacrifice and denial of small pleasures.

The most important thing to keep in mind when making any kind of positive change in your life is to focus on the value you’ll receive from your commitment. Your investment! Never think of your conscientious efforts as sacrifices. Instead, see them as part of the journey towards creating your best self. With this at the forefront of your mind, you’ll be motivated to keep pushing forward.

There’s a good reason why behavioural change is referred to as part of our development – it takes time, and while we might prefer quick-fix solutions nowadays, the old adage still rings true: anything worthwhile takes time. But as Charles Duhigg reminds us in his book The Power of Habit, “If you believe you can change – if you make it a habit – the change becomes real.”