How To Protect Your Mental Health From Social Media 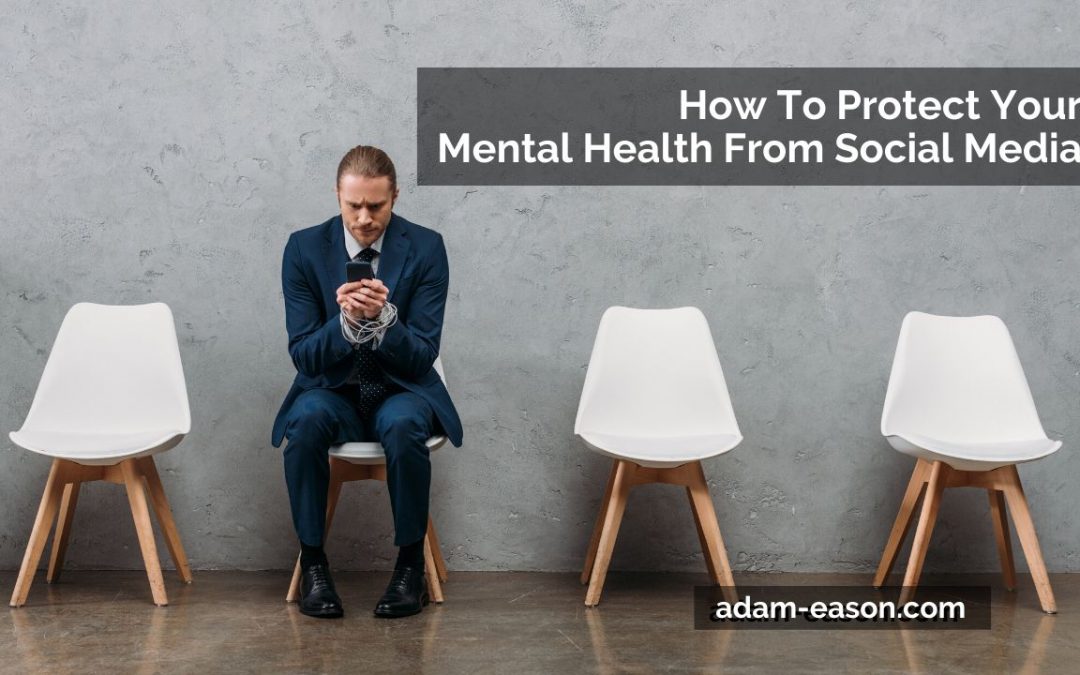 Most of us use social media of one kind or another these days, and all of us are likely to have been upset, troubled or affected detrimentally in some way as a result of it. Social media is a mouthpiece for so much of the modern world we live in, and it can have a prooufn impact upon us in a range of problematic ways if we are not careful.

“Social media has given us this idea that we should all have a posse of friends when in reality, if we have one or two really good friends, we are lucky.” –  Brene Brown.

First of all, what does it mean to be mentally healthy??

It is also important to understand there is a very close relationship between mental health and physical health.

How does social media impact on mental health?

There are several studies linking social media to anxiety and compulsive behaviour. A recent set of studies by Anxiety UK found that 45% of British adults indicated they feel worried or uncomfortable when they cannot access their email or social network sites. Anxiety is caused by fear, worry and a sense of being out of control. When you post images and comments on social media you are completely exposed and have no control over how others will respond or how this will affect you.

Young people now live in a generation who are constantly comparing themselves to others and in the world of teens, it’s all about popularity. A 2014 study in the US by Harris Interactive on behalf of the Renfrew Centre found that more than 50% of people will ‘Photoshop’ a picture before posting online. When posting images, it’s often about the number of likes or comments they receive. Or lack of. Negative feedback and lack of likes can be very damaging for a young persons’ self-esteem. In the world of social media, young people feel the pressure of keeping up with their friends, ensuring they respond to posts with likes or comments to avoid fallouts and to be perceived by others in a particular way.

When living their lives online there is a constant need for reassurance and young people, particularly girls, are feeling the need to present themselves as ‘perfect’. Just posting a picture can cause anxiety. Many comments fish for positive responses, for example; ‘Do I look ok in the picture?’; ‘Does my hair look ok?’; ‘Do I look fat?’ This will increase their anxiety of constantly worrying about what others think as well as keeping up appearances and fitting in. Sadly, young people are becoming so used to social media and its demands; they don’t even recognise the anxieties that it causes them.

“Stop looking for others to validate or verify you. You were already somebody before your social media account was created.” ― Germany Kent.

Yes indeed, the research shows that there are links to both anxiety and depression. One study carried out in 2017, which looked at over 12,000 young people found a statistically significant correlation between social media use and depressive symptoms. Another study conducted by psychologist Dr. Mark Becker, of Michigan State University, found a 70% increase in self- reported depressive symptoms among a group using social media and a 42% increase in social anxiety.

Body dysmorphia is affected by social media. A study by Bryony Bamford found that high amounts of time spent on Facebook can lead to body image insecurity which can lead to depression. Another study by psychologist Dr. Paula Durlofsky demonstrated a correlation between social media and depression because of low self-esteem. Young people were found to be critically comparing themselves to others, using others’ posts to measure the success or failures in their own lives.

Another cause of depression is online bullying. Studies have shown that Cyberbullying through social media sites are common and can cause profound psychological problems which can include depression, anxiety, sleep deprivation, severe isolation, and tragically suicide.  Online bullying is particularly upsetting when you see the direct impact it is having on a young person’s mental health but is powerless to control.  Almost half of 11-16year old’s have experienced bullying on social media.

There is also a link between sleep deprivation and social media. Young people are often up late at night responding to what’s going on the social media. They have developed a fear of missing out (FOMO) and worry about being criticised or bullied for not responding to friend’s posts or messages. With a phone continually in hand, an immediate response is expected which also causes an increase in anxiety.

“I feel social media can be very distracting, unhealthy, and harmful to one’s self-confidence. I don’t even log on to it on my phone except when I post something on Instagram.” – Rupi Kaur.

Social media can also normalise dangerous behaviours such as self-harm and even suicide. This is something that has been brought up as an ever-increasing issue with a report from the BBC Today stating that there ‘has been an “alarming” rise in the rates of self-harm in England.’
Continued exposure to messages of any sort makes them seem far more ordinary and as a result, such behaviours become incorporated into the everyday elements of how people live their lives. They are accepted as opposed to being seen as something harmful. Research also shows that self-harming behaviours are contagious. In a real-world setting, this may mean that they spread to two or three people but online this contagion can quickly spread to thousands of youngsters.

These examples highlight much of the plight of younger people, but it is just as much of a problem among adults, with similar mechanisms, but perhaps variations around differing topics such as political opinions, life and family comparisons, and idealist expectations as well as expressing particular personal stances on a range of topics.

The cumulative effect – on mental health. A bit like filling up a glass of water a drop at a time. Each drop may seem inconsequential but eventually the glass will overflow. This is the way in which social media can, for some, eat away their well-being. For example, self-esteem is lowered through comparison – seeing other people living happier more connected lives than us can make us feel socially isolated in contrast. Another example is the way in which stress iteratively adds up. Stress from remaining constantly alert for new social media messages triggers our fight or flight system releasing the stress hormone cortisol. Over time, this leads to chronic stress which in turn can lead to anxiety and depression. Similar stress levels can also be triggered by the constant need to project an unrealistic image within our social network. Always trying to look like we’re having fun, doing interesting things, travelling etc as a result, ‘our profiles reflect how we want to be perceived, rather than showing an honest picture of who we truly are’ which eats away at self-worth and causes identity diffusion.

“With the rise of social media, the level of empathy among the kids has diminished greatly, and if this continues due to our indifference, then I’m afraid, we’ll be giving rise to a planet full of sociopaths.” ― Abhijit Naskar.

Research has also found that when we focus time on building social media networks it can negatively affect our ‘real life relationships’ with our close family and friends. Our time spent with virtual connections tends to be more superficial in nature. As a result, we begin to lose the social support available to us in real terms and that social connection is essential to living a fulfilled and emotionally resilient life. A number of studies have shown that these virtual connections can even result in long-term emotional and psychological problems. Dr. Steven Strogatz, a professor at Cornell for example worries that social media is creating a growing confusion between our weak ties (e.g. people who might be useful in referring us to a good restaurant) and our strong ties (close family and friends).  Strogatz says, “The distinction between genuine friends and acquaintances is becoming blurred. Users are spending more time maintaining relationships with people they don’t really care about.“

“Limiting time on social media can actually help you to improve and appreciate relationships that are real and true.” ― Germany Kent.

So what can you do to stay mentally healthy?

2. The opposite of looking at how great other people’s lives are, is not looking!  What we don’t know won’t hurt us.

Read this great article to help you have a digital detox if you feel one is needed:
– Why You Need A Digital Detox and How To Have One.

3. Focus on what you are doing in that moment. Instead of ‘checking in’ to announce to the world where you are eating, just EAT! (Mindful eating can help you shed that extra weight too!)

Put a little time aside during the day for social media, instead of being on those apps all day.

Stay away from social media when you are with your children, spouse or partner, driving, watching a film, eating, before bed and first thing in the morning and so on. This will help you prevent becoming overwhelmed.

4. Spend your days focusing on your personal goals and the steps you need to achieve those goals.  If the successes of others are not constantly on your mind, than it is easy to focus on being the best YOU can be. Focus on setting realistic goals, looking at the things we can’t control and letting those things go, looking at the things we can control and working to achieve those things.

“What is interesting is the power and the impact of social media… So we must try to use social media in a good way.” – Malala Yousafzai.

I love this final quote (above) – think strategically, think about your own goals, and then work out ways social media can help inform you, educate you, motivate you healthily, and help you think more effectively instead of the opposite. Turn it into a resource as much as possible.

Would you like a satisfying and meaningful career as a hypnotherapist helping others? Are you a hypnotherapist looking for stimulating and career enhancing continued professional development and advanced studes? Explore the pages of this website.
Adam Eason’s Anglo European training college.