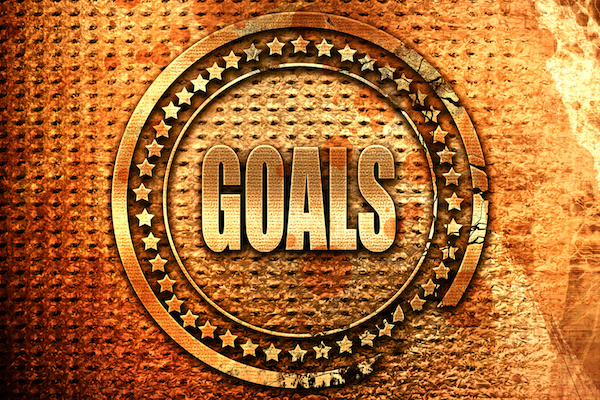 For every race I run in, I have a number of goals set out for my training and the desired outcome for the end of that training period and race. I get asked a great deal about goals and it is not always necessarily as simple as having a goal and working towards it. So today is the first part of a series of three articles I have written on goal setting for running.

“I want to be able to run a mile without stopping” said my brother-in-law to me recently as he has taken up running as a hobby. Runners do tend to get a good goal in their mind, especially when they have heard people like me telling them that they need to have something to focus on or aim towards.

“Our goal is just to finish the 50 mile ultra”

“My aim is to run to lose a stone in weight”

These are just a handful of the kinds of things people state when I work with them and ask them to have a clear defined goal for us to aim for. Runners who are beginners sometimes are less comfortable with goals as they are not totally convinced about their ability and have no evidence upon which to base it on. Whereas, seasoned runners seem to find it very easy to set goals for themselves.

Goals build and develop motivation and although I have already written about the importance of goals, I am more keen to show you how to develop your own means of setting goals in a way that is likely to enhance your running experience and get you better results.

There are differing types of goals that runners can have. Real elite athletes may well have outcome goals that comprise of where they wish to finish in the race “I want to be first” or “As long as I finish in front of Haile Gebrsalassie I’ll be happy” (I’m kidding with that one).

Some runners will look at process goals, which focus on how you perform; “my goal is to run this training run and pump my arms throughout” or “I make sure I run by lifting my legs with my hamstrings instead of my quads” for those that are getting technical or looking at their running technique.

However, most runners are more likely to be using performance goals which are goals that you set relating to your own level of ability such as “I want to run a personal best time at this race” or “I want to run this marathon in sub 3 hours.” The different types of goals can be useful for us in different ways and can influence and effect us by directing our thoughts in different ways.

There has been a good amount of study and research conducted on setting goals in sports and exercise. Rising up out of the academic work of Ryan (1970) and Taylor (1967) in more recent times, the major contributor to the study of goals in athletic performance is Locke (1966, 1968, 1978) and with colleagues in 1981 and 1990. Since then, hundreds of studies have been conducted in a wide variety of settings in business and industry and shown to have impressive results. However, it was really only in the mind 1980s that goal setting in sport was examined.

Locke and Latham (1985) suggested that goal setting could work much better in sports due to the fact that the way sportspeople are more objective about their performance. More recently, studies have shown a mix of support for goal-setting effectiveness in sport. A number of studies have not supported the notion of it being so effective (Burton 1992, Weinberg, 1992, 1994).

If we look at a number of more recent studies (Burton, Weinberg, Yukelson, & Weigand, 1998; Filby, Maynard, & Graydon, 1999; Weinberg, Burke, & Jackson, 1997) as well as the impressive meta-analysis of Kyllo and Landers (1995) we can see that there are some consistent notions within the literature regarding goal-setting in sport:

So how is it that goals actually help sporting performance?

This is about us runners keeping focused and being aware of the cues we are presented with when training or preparing for an event of some kind.

For example, if we want to run a sub 4 hour marathon, we need to be aware of what pace we can maintain in our long runs, we need to know that we are doing enough miles each week to have built up our endurance. We may find that we can easily run for 3 hours, but it may be slower than we wish and therefore we may decide that in order to achieve our goal, we need to look at our pace and speedwork – this could lead to other, smaller goals to be set for achieving speed or simply hitting speedwork targets.

Also, if we had no goal at all, we may simply be running without a sense of purpose and it may not be compelling to be without an aim of any kind and thusly may result in us lacking motivation.

By having feedback as we progress towards the goal, we have a means of keeping on with our effort.

Many people in my therapy rooms tend to find the real long-term goals are not all that compelling. Even a marathon that is 16 weeks away can seem like a distant thing to be aiming for. So looking at short term goals is often a great contributor to those longer terms ones.

Likewise, if someone wants to reduce their weight by 6 stone, that may not happen immediately and it would not be safe for it to happen too quickly. So you may decide to have shorter term goals that lead up and towards that bigger goal such as “I aim to reduce my weight by two pounds this week” to have as a compelling shorter term achievement.

Shorter goals also indicate success is being achieved and when we feel like we are achieving, it becomes a lot easier to persist with our training and endeavours.

What is meant here, is that when we set goals, often strategies are put in place by those advising us such as coaches at running clubs or other runners that help us move towards our goals.

I know that the advice I have had via resources at Runners World, books, magazines, coaches, trainers, seasoned runners at running clubs, fellow competitors at events and friends have often resulted in me applying new skills and strategies to my training schedule to help meet my next goal.

Since I started running on the front of my feet more than I used to, my times have got quicker as I have got older. Since I pumped my arms better during sprints, I generate more speed. There are other examples too, examples that have all contributed to me wanting to develop to achieve those goals I had set.

However, in more recent times, there has been some caution with regards to goal setting. Burton (1989) suggested that goals can increase anxiety and even knock confidence if they are based on factors outside an individuals control. For example, if you have a goal to finish in the top 100 competitors at London marathon, you cannot account for the other runners and how they run on the day. If that person got a personal best time but came 200th, they may feel disappointed despite what many would consider a fabulous performance.

Therefore, setting personal performance goals is recommended based upon our own considered level of ability and we measure up against ourselves – it requires us to be realisitic and it also suggests that goal setting is a skill to be developed and practiced in order to derive the most benefit.

Goal orientation theory has been written about by many authors (Duda, 1992; Roberts, 1992, Dweck, 1986, for example) and suggests that the goals we set ourselves affect the way we evaluate our own ability and performance and the way we attrinute success or failure. These thoughts, ideas and other cognitions in turn then influence the strategies we take forward in training, how we behave during training and when competing and influences our motivation and persistence.

I wrote about this attribution of success and failure previously here on this blog when I discussed Martin Seligman’s Learned Optimism and Albert Ellis’s REBT approach.

The studies suggest that each individuals perception of their own ability is affected by how they interpret success and failure, which then affects and influences goal-directed behaviour in relation to running performance, training and racing.

I’ll be back soon to discuss the key principles to engage in when goal setting and also how to actually go about setting goals when running.

Have you read my book Hypnosis for Running: Training Your Mind to Maximise Your Running Performance? It helps any athlete or sportsperson maximise performance.
Likewise, if you’d like to learn more about self-hypnosis, understand the evidence based principles of it from a scientific perspective and learn how to apply it to many areas of your life while having fun and in a safe environment and have the opportunity to test everything you learn, then come and join me for my one day seminar which does all that and more, have a read here: The Science of Self-Hypnosis Seminar. Alternatively, go grab a copy of my Science of self-hypnosis book.