Critical Thinking: Its Importance and Ways to Improve It 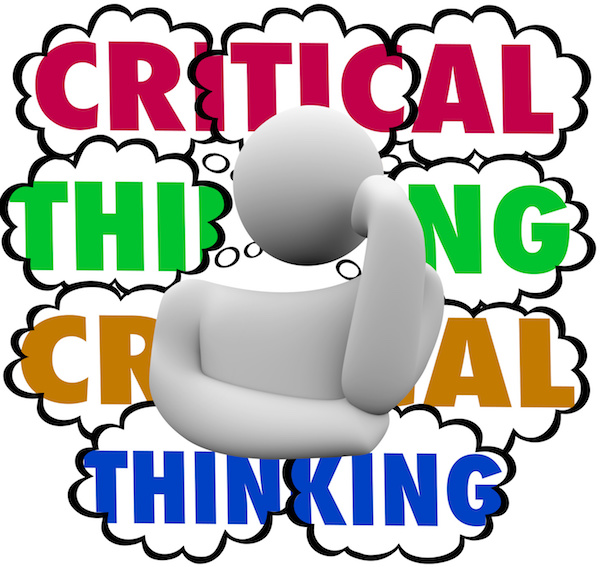 Critical thinking is a central tenet of my training courses and my therapeutic work with clients that myself, my students and my clients become good and effective critical thinkers. I go on about it a lot, especially in the academic environment, but today I am keen to write about how to engage in critical thinking and become a critical thinker in your day-to-day life, especially when you see how much hot topics such as ‘fake news’ are becoming so prevalent.

“Education is not the learning of facts, but the training of the mind to think.” – Albert Einstein.

Many educational institutions don’t just offer courses in critical thinking, it is inherent and expected within higher education and you can grab books and excellent audios on how to be an effective critical thinker (seek out Audible’s great courses edition on this topic for example, it is excellent) and it is arguably one of the most valuable skills anyone can develop. When people try to improve mentally, they might aim at increasing their IQ or gain a larger vocabulary. It’s disputed and debated as to whether anyone’s intelligence can actually be meaningfully increased, but there is so much else that can be improved if you stand back and approach thinking as a skill.

What is critical thinking?
‘Thinking’ has been described as the capacity to reflect, reason, and draw conclusions based on our experiences, knowledge, and insights. It has also been referred to as “what makes us human,” enabling us to communicate, create, and advance. Thinking encompasses many aspects of who we are, such as observing, learning, remembering, questioning, judging, innovating, arguing, deciding, and acting.
Moreover, ‘critical thinking’ is generally thought of as a mode of thinking in which one improves the quality of his or her thinking by skillfully analysing, assessing, and reconstructing his or her thought. In order to be considered as critical thinker, the person must be reflective, self-aware, self-directed, self-disciplined, self-monitored, and self-corrective.

“It is in your moments of decision that your destiny is shaped.” – Tony Robbins

Critical thinkers take an issue and break it down into it’s component parts, analysing an issue from as many angles as possible. Strong critical thinking skills can put you on the path to achieving more of your goals. They can help you rid your mind of limiting ideas that you’ve accumulated throughout your life.
The latest research has shown the effectiveness of critical thinking in the workplace. A recent paper published in the journal Current Directions in Psychological Science, reports that cognitive ability tests, including critical thinking tests “. . . are among the strongest and most consistent predictors of performance across academic and work settings.” Here are just a few ways critical thinking help you:

1. You realise that many of your thoughts aren’t your own:
How many thoughts do you have rolling around in your head that came from others? As you grew up, you absorbed the ideas of your role models and those influential in your life. You also learned cultural norms, routines and ways to avoid conflict on occasions and fit in. Think back to when you were a child. There’s a good chance that the thoughts, opinions and values of the influential people in your life echo within you, even today.

In a recent paper (Kingsley et al., 2014)  it states “Critical thinking is a way to intervene in your thought process,” says Linda Elder, an educational psychologist and president of the Foundation for Critical Thinking based in Tomales, Calif. “It’s a way to routinely and consistently seek problems in your thinking.” With the power of critical thinking, you can free your mind of any memes that no longer serve you. Take stock of your mental inventory and dispose of ideas or beliefs that are negative or harmful. Some of those thoughts have the potential to sabotage you.

2. Empower yourself by analysing challenging issues:
Critical thinking gives you the ability to identify and understand the logical connections between concepts, detect faulty reasoning, systematically solve issues, and test arguments.

A toddler who places his hand on a hot stove will learn to stay clear of stoves. But that same child probably won’t infer that they ought to also avoid the hot toaster. The toddler lacks the knowledge and ability to draw inferences from his experiences beyond what is immediately apparent. Critical thinking allows you to come to conclusions about the world around you and to solve conflicts that aren’t necessarily related to one another.

3. Cultivating critical thinking can free you from superstitions that may be holding you back:
As silly as it sounds, many of us still believe the superstitions we hear about as children. However, once you learn how to think critically, you’ll figure out that these stories are illogical.

Have you ever avoided stepping on a crack in the sidewalk, crossing the path of a black cat, or walking under a ladder for fear of bad luck? Take issues apart to get at their inner workings. Remember that your imagination is capable of conjuring up any scenario, and fear has a tendency to make an event seem more likely than it really is.

This is very similar to recognising our own cognitive biases, which you can read much more about here:
a) Cognitive Bias and Heuristics.

1. Use your brain efficiently:
Although thinking is mental, it is intimately connected to the brain, which has its own specific physiology. As a physical organ, the first thing the brain needs is adequate sleep every night. Medical science still considers why we need sleep a mystery, but there’s no doubt that we do. Insomnia needs to be overcome, if at all possible, without sleep aids, because even over-the-counter remedies leave most people feeling groggy and dull the next day.

It’s also extremely beneficial to vary the brain’s activity by giving it some down time during the day, which can amount to sitting alone quietly with eyes shut for 10 minutes every six hours or so. Standing up and moving around once an hour refreshes the body as a whole. Using caffeine or sugar to stimulate a fatigued brain is nowhere near as effective as adopting the practice of self-hypnosis or meditation, which are among the most effective ways of having a brain “reset”, along with a host of other benefits.

2. Develop a strong intuition:
Most people discount intuition and its power to improve their critical thinking. Much creativity is based on intuition. Without intuition the mind plods and becomes routine. It can be argued that the deepest source of the mind is totally intuitive, as validated by centuries of meditative and contemplative practices. Your thinking becomes infinitely richer as you welcome intuition and learn to develop it. However, do not simply believe that your intuition is all-wise and all-seeing, it can also be developed with intelligent reasoning and critical thinking.

Read more about this notion here:
Are Your Gut Feelings Actually An All Seeing Eye? A Demi God Of Some Sort?

3. Recognise bad thinking when it occurs:
Although the human mind will never be as mechanically precise as a computer’s calculations–and shouldn’t aspire to be–there are definite flaws that can be improved upon. Bad thinking comes in several major categories, and it’s good to know what they are so that you can avoid them in yourself and others.

Here is a great way to have awareness of your thoughts and recognize thinking errors:
Awareness: Spotting Thinking Errors Using Self-Hypnosis.

4. Check in on your state of mind:
The psychology of thinking is just as important as the physiology of thinking. It begins with knowing what your general mood is. We tend to approach thinking a purely rational and logical at its best, but this conception is not entirely adequate. A bad mood can distort anyone’s judgment and decision-making abilities. Various psychological studies have found that the same is true when we’re in a good mood. People often tend to pay too much for things if their mood is either very good or very bad. Don’t deny to yourself that you happen to be in a certain mood. Only if you recognise your mental state can you deal with it and take it into account.

With time, practice, and diligence using these four steps your critical thinking process will become a habit. You’ll be able to better predict results, anticipate pitfalls, and avoid biased thinking. 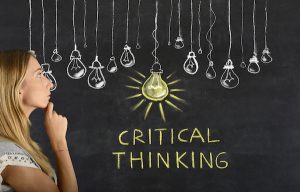 Self-hypnosis is a great way to help advance critical thinking. If you’d like to learn more about self-hypnosis, understand the evidence based principles of it from a scientific perspective and learn how to apply it to many areas of your life while having fun and in a safe environment and have the opportunity to test everything you learn, then come and join me for my one day seminar which does all that and more, have a read here: The Science of Self-Hypnosis Seminar.