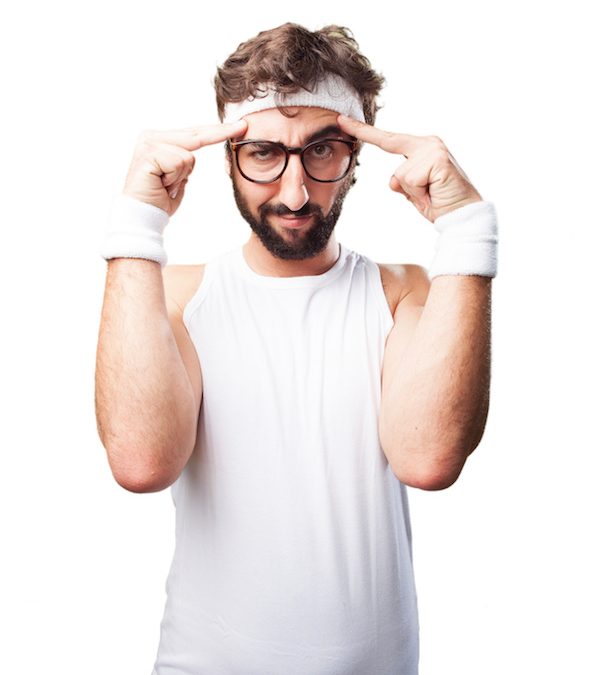 There are a number of famous irrational beliefs that tend to reach each and every sports person at some stage:

No pain – no gain.
You must give 110% all the time.
Practice makes perfect.
Winning isn’t everything – it’s the only thing.

These kinds of thinking distortions display irrational beliefs of perfectionism, self-worth depending upon achievement and personalization for starters and research tends to suggest that dealing with irrational beliefs and overcoming thinking distortions of this kind of ilk help the athlete be appropriately relaxed, focused, positive and motivated (Zinsser et. Al., 2001).

1984 seems like a long time ago, doesn’t it? That is when the classic Straub and Williams book Cognitive Sport Psychology helped athletes and sports people to really engage with a cognitive skill set to enhance performance and the field of sports psychology has never looked back it would seem.

All the stuff that I have written about here on this blog could in some way be deemed as a cognitive skill set – the mental imagery skills, the relaxation processes, the mindfulness, the goal setting stuff and so on.

Within my own therapeutic trainings and work with individual clients, the influence of Albert Ellis and Aaron Beck is obvious and nothing brings me quite as much joy as when I get to bring in facets of their work into other loves I have – such as running.

Running for fun may not necessarily encourage us to have too many so-called thinking errors or distortion, but when we start getting to stages where we want to perform better and race faster, pressure is placed upon our performance and training schedule along with the weight of expectation and so defeating beliefs, self-sabotage as well as distorted and irrational thoughts can start to find themselves impeding our performance.

Importantly for us runners, we need to recognize that our cognitions (anything that goes on in the head that can be verbalised; dialogue, thoughts, ideas, beliefs etc) can and do affect sporting performance, but that our cognitions can be changed and as a result can improve performance (Dobson & Block, 1988).

Gauron (1984) identified a number of common cognitive distortions that can and do regularly impede the progress of athletes. Here is a list of those common irrational beliefs and problematic thinking styles Gauron identified:

1. Catastrophisation: This is something that regularly features in my therapeutic work and when I recently referred to the similar notion of ‘awfulising’ in my ezine a while back, my business partner Keith and several of our subscribers took me to task about assuming that everyone understood what I meant by it!

When an individual catastrophises, they tend to imagine the worst case scenario and allow issues or minor adversity to amplify and become a major dramatic issue.

A catastrophising runner may think “oh no, I missed my hills session this week due to work, now I am behind on my schedule and I’ll never get up to the level needed to run the marathon, and I am now letting everyone down who supported me, and I struggle to live with that and the world may well explode as a result…”

I am joking about the world exploding bit. The exaggeration hopefully illustrates the point I wanted to make. If we expect the worst case scenario, it is likely to effect performance and responses to that thought, even creating more unwanted outcomes.

2. Blaming: This is whereby a runner fails to take any responsibility for their own performance. I have met and worked with many runners who blame the course, the weather conditions, the poor advice they received, and all manner of other people and circumstances for their poor performance.

Not taking responsibility for one’s own performance can in turn impair good performance. With the right kind of outcomes set and realistic goals developed with the appropriate levels of responsibility accepted, a healthy evaluation of our own running performance results (Orbach, Singer & Price, 1999).

3. On the flip side of that coin, we have Over-Personalisation. This is having a self-defeating way of making everything very personal and taking too much responsibility for their own performance. At times, some of the failures and mistakes may well have other valid reasons.

I can remember watching my footballing hero Stuart Pearce on his knees crying after missing a world cup penalty for England and shouldering masses of blame for letting the team and nation down. Yet, the team were jointly responsible for not having won the game in the proper 90 minutes and extra time and letting it go to penalties, and the pressure on the shoulders of those taking the penalties in those circumstances is huge and effects ability greatly.

If a runner allows himself to think to personally and take all the responsibility, it can lower the belief in the real ability that runner has and impair performance, lower motivation and see our commitment dwindle.

A good balance is required regarding the previous two issues.

4. Perfectionism:  This is an unrealistic (and often unattainable) level of expectation and can lead to problematic pressure being placed upon the individual. Perfectionism can also lead to the often paralyzing ‘fear-of-failure’ which often prevents people from engaging fully and effectively in the training process or events. If the runner performs or trains in a less than perfect manner or with a less than perfect result, the runner deems himself a failure and can end up fearing more failure.

5. Self-worth depending on achievement:  A lot of athletes in general place value upon themselves correlated to their success in their sport. Realistically, there are very few who can be number one. Many runners I have encountered professionally and personally have used their marathon time as a gauge for their own level of value placed upon themselves.

Runners can be detrimentally effected by this idea of valuing themselves in terms of their running success or achievements. It can demotivate and impair enjoyment as a result.

6. Thinking in absolutes: When a runner or any athlete thinks in black and white only, it can be problematic. If we are a winner or a loser with nothing in between it can be defeating or inaccurate or unfairly representing the performance outcome.

When runners have a polarized way of thinking, they might label themselves in a way that restricts or impairs performance or leads the runner to have detrimentally effected expectancy about future performances.

Within my own therapy rooms, I often use Socratic questioning techniques to dispute, question, look for evidence and rationalise when these beliefs and thinking distortions present themselves. However, it would be inappropriate to write up a full section on Socratic questioning methods here.

Therefore, evaluating thoughts and beliefs by asking the following questions is recommended by Steimetz, Blankenship, Brown, Hall, and Miller (1980), if you suspect a thought of belief you have is holding you back, ask yourself the following:

– Is this thought helping me reach my goal?
– Does this thought/belief reduce emotional conflict being experienced?

Potentially even more important to us runners here though, is the fact that the research into learning to restructure cognitions has been emphatically positive (Greenspan and Feltz, 1989, as a great example analysis of such studies).