Are Runners Using Self-Hypnosis During Their Runs Without Realising? 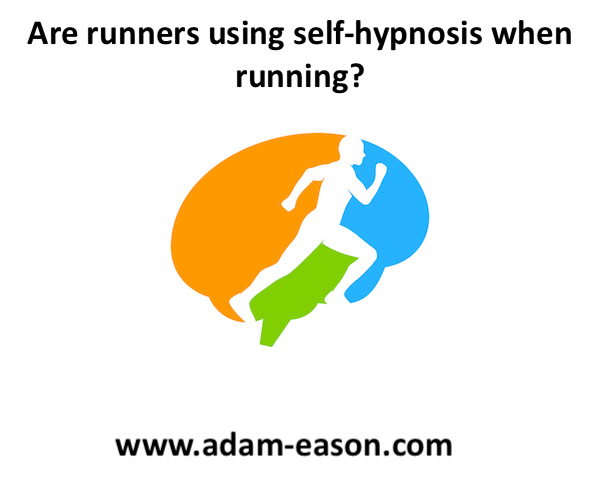 Whilst writing here on my main blog at the end of last week, my research led me to stumble across an article published in a 1983 volume of the American Journal of Clinical Hypnosis and it is entitled “Auto-Hypnosis in Long Distance Runners” by Kenneth Callen – I could not believe it.

How on earth did such a journal entry and study escape my attentions until then? Well, I shall not carry on looking for answers on that, needless to say, my eyes lit up, and I began reading in some depth. What could be more wonderful, an academic journal attempting to correlate hypnosis and running? For me, it was a golden few moments.

So today, I could not resist sharing with you some of the findings of this study, because they are fascinating. First up, here is the abstract for the study, which as every good abstract aims to do, explains the study and its findings;

Four hundred and twenty-four runners completed a questionnaire concerning their running habits and the mental processes which occur while running. Over half of the respondents experience a trance-like state with wide variation in depth, along with increased receptivity to internal events, absorption, and vivid imagery, all hallmarks of auto-hypnosis. The techniques used to get into a trance are the same as those commonly employed in hetero-hypnosis; rhythmical deep breathing, eye fixation, and repetition of a sound or phrase. Many of the runners become more creative during these trance-like states, and some feel their athletic performance is enhanced.

Well, this is exciting stuff for us here, on many levels. The study does really conclude by asking more questions and suggesting more research is needed; indeed. However, I thought I’d share with you some of the key findings in this particular study, which make for fascinating reading, even if the study does not offer up any particular tool or methodology for our own gain, which is usually what piques my interest.

Prior to this study, the vast majority of research had looked at the end result of exercise and running performance.  The authors noted that very little research examined the mental processes which occurred during running.

With my own running experiences and having worked with so many runners and met so many over the years at races, clubs, events and so on, I found myself agreeing with some of the opening statements framing this study –

Running is a natural process which under ordinary circumstances requires very little concentration or attention, thereby, freeing the mind to wander in pleasant fantasy. Most runners tend to run alone and many seek out isolated areas with few distractions, such as parks and country roads.

Some might even add, this is a perfect environment for self-hypnosis being described here? For me it is anyway! Many runners describe the ‘runner’s high’ which I mentioned on here before.

There is also a great deal of literature where people refer subjectively to their running experience as delving into other worlds and realms of altered consciousness etc. Which is all very good, but how is this related to or pertaining to hypnosis?

The authors of this study suggested that there were some parallels to be drawn between some formal definitions of major authors in the field of self-hypnosis, and the psychological experience of runners detailed in the study.

For example, Fromm et al (1981) refer to self-hypnosis as trance-like states with wide variation in depth, increased receptivity to interval events, absorption, and vivid visual imagery – which is very similar to a number of accounts given by runners when describing their own mental experience during running. Likewise, the very same authors Fromm at al (1981) who have conducted a great deal of research on the phenomena of self-hypnosis also call for more research on the subject of ‘alert self-hypnosis’ such as that experienced by runners.

So I wanted to share some of the results of this study:

1. 267 (54%) of the sample indicated that they sometimes feel they are in a “trance” or altered state of consciousness while running.

36 (16%) of this group have been hypnotised before and 26 (11%) have been exposed to other techniques such as transcendental meditation, yoga, and autogenic training.

Interestingly, comparing the 165 respondents with no previous experience with the 62 who had used hypnosis (or other techniques) before reveals no significant difference on any of the items asked within the questionnaire.

Of those who stated they experienced “trance-like” states when running, 70 (31%) described the methods they used to get into those states:
– 24 (35%) used their own breathing as a technique. They described rhythmical breathing, counting and stride patterns.
– 18 (26%) use imagery which is frequently described as “out of the body” whereby the runner watches himself from a dissociated perspective.
– 9 (13%) of those using imagery had a grandiose quality to the imagery used – such as winning a big marathon event or Olympic gold.
– 6 (9%) used music to induce a trance. Often using some of the lyrics over and over in the mind.
– The remainder focused attention on a particular point or would allow their mind to wander.

2. 196 (46%) of the runners stated that they repeated words or phrases in their heads when running. 43% of them used music lyrics or music to repeat. 15% stated that they used encouraging words to themselves such as “you can do it” etc. 12% employ counting such as counting steps, breaths or passing cars.

The runners were also asked what mental processes they used to run faster and better. 108 (25%) described techniques fitting into a variety of categories:

– 18% use imagery relating to body parts working well or their body functioning smoothly.
– 16% Use distractions such as talking to someone else or focusing elsewhere, getting absorbed in the scenery or used sexual thoughts.
– 14% used goal setting and rewarding themselves for hitting targets.
– 14% focused on their form throughout in an attempt to keep efficient and effective.

3. 245 (58%) of those runners in the survey engaged in mental imagery of some kind when running.

– 34% try to form images.
– 66% say that the images happen spontaneously without effort.
– 35% use imagery that involves watching one’ self running and often crossing the line at the end of a run. Many see themselves as fit and healthy.

– 18% engage in grandiose imagery, such as winning races.
– 18% imagine pleasant scenes such as beaches or forests.

4. 251 (59%) of runners in this study felt that they become more creative when running. They found themselves able to find solutions to problems, generate ideas better and with less effort.

It would be an interesting study that examined whenther running somehow does help us create new ideas or if it is lowering anxiety in order to enable a free flow of thoughts.

It is a fascinating study for sure. Especially for me as author of this Hypnosis for Running blog.

Even though runners may seem blank and withdrawn and quiet inside, this study suggests that the opposite is true and that the majority are engaged in some mental activity. The study even suggests that what many runners experience is similar, if not the same, as self-hypnosis.

Fromm et al (1981) describe self-hypnosis as being characterised by “an expansion of attentional range, increased receptivity to internal events and an increase in the quantity and quality of imagery.” The mental processes occurring during running tend to meet all these criteria for self-hypnosis. Though heck, no-one single definition of self-hypnosis is as of yet agreed upon and tends to be open to plenty of debate.

Typically, runners being dissociated or absorbed in something else or engaged in other types of reality are also considered characteristics of both hetero- and self-hypnosis.

Again, sixty-two of the 227 runners who say they experience trance states have been exposed to hetero-hypnosis or other methods of altering consciousness such as meditation and yoga. Comparison of these responses with those of the 165 who have had no experience reveals no important differences.

This study (especially with my level of biased interpretation) might suggest that running naturally enhances hypnosis skills of the individual.

Spanos et al (1986) and Fromm et al (1981) demonstrated that those who practiced their self-hypnosis skills became more responsive and more hypnotisable. Most runners train 3-5 times a week and so get to practice their own metnal strategies that many times too. Runners really do therefore (surely!) have the capacity to become exceptional self-hypnotists – especially if trained how to use it effectively instead of just using spontaneous forms as noted and reported on within this study.

I wonder how true these statistics would be today. I know Runners World and other running organisations do runners surveys, but none really look at psychological processes such as this study.

For me, it gives me even more encouragement about the usefulness of the mental capacity and self-hypnosis capacity, relevance and benefits as runners.

There you have it, some research sharing today. I’ll be back later this week with a SPOTY (Sports Personality of the Year) inspired entry…