Why Accepting Your Mortality is Good For You 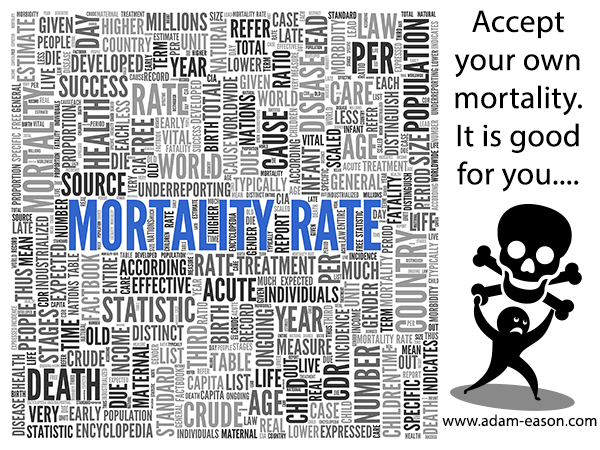 Accepting mortality – sounds like a bit of a morbid way to start the year here on my blog, I understand how that might initially appear and how worrying some might find the chosen imagery and the terms used on it at the top of this entry. That is a symptom of what I’m writing about today….

This past year, I’ve experienced my fair share of loss of close family and friends, and it has made me recognise and examine the notion of mortality.

In my efforts to deal with loss, it has also led me to accept my own mortality along with those who I’ve had to say goodbye to. I have written before on a topic that initially many people struggled with – the notion and practice of negative visualization. The process involves you imagining how life would be if you lost those you love or are closest to, for example. It certainly helps you appreciate those people when you are with them and helps you to be present when you are together. You can read about that here;
Using Stoic Negative Visualisation With Self-Hypnosis.

Bhutan is known as one of the happiest countries in the world. It’s also known as a country that measures the happiness level of its citizens as the primary parameter of its development instead of measuring its GDP which most other countries measure.

With this unique focus, Bhutan has attracted many tourists and journalists who seek to find the secret of this happiness country.

So, what is the secret of Bhutan’s happiness?

Embracing the Dark Side

Eric Weiner explained one interesting idea in his article titled ‘Bhutan’s Dark Secret to Happiness.’ He tells that people in Bhutan habitually and consciously think about death (and mortality) every single day.

They believe that the idea of death should be ingrained in their daily lives so that they can accept the idea without being fearful of it.

This is common sense to them. Embracing every element of life as it is (including the dark side of it) without judging or covering up helps them stay being humble and grateful. Death (and mortality), to the Bhutanese, is a symbolic and important moment as much as birth.

Interestingly in so many other countries, speaking of death and our mortality is quietly regarded as taboo. Not many ask their friends “what’s your plan for your death?” as a topic of interest. Death is something we think we need to try to avoid at all cost. Speaking or thinking of it feels like a terrible, uncaring thing to do.

In the article I share above, I refer to Premeditatio malorum (“the pre-meditation of evils”) which is a Stoic exercise whereby we imagine things that could go wrong or be taken away from us. It helps us accept mortality and prepare for life’s inevitable setbacks. In my therapy rooms, I use a number of approaches in my therapy rooms that the prominent therapist Arnold Lazarus referred to as an “emotional fire drill” which aimed to prepare people for major traumatic experiences that are going to occur in their life, but such approaches are not really mainstream, and we tend to avoid such subjects around mortality typically.

So can it be possible that our avoidance of the subject of death and our mortality has made our lives less happy?

Planning for Your Death: Good or Bad?

While death actually happens to everyone, we don’t really think of it. And that’s especially true when we are young and well. Maybe my own motivation for writing this and addressing this subject is down to getting older and having experienced much more personal loss as those around me aged as well….

But when people don’t plan for their death, or accept their own mortality there can be extra devastation caused for those who are left behind. These are issues that are commonly dealt with…. Premature death of parents can result in custody issues for children. Family members of the deceased might fight over their shares of inheritance. A company that suddenly loses a key leader might dive in value or even have to close down, leaving many employees suddenly jobless.

Many of these challenges and much of the extra stress can be reduced if things were planned and documented. And our lack of thinking about death leads to the fact that more than half the adult population in most countries do not have wills.

It’s not just the grief, sadness and emotional devastation experienced by someone passing, there are practical ramifications from burying our head in the sand about death too.

Leaving Money Vs. Leaving a Legacy

Many (if not most) people feel that they want to leave financial security for their children. All parents want their children to have a happy life. And many agree that having plenty of money can make life easier.

But when it comes to happiness, study after study finds that people who have earned their wealth are happier than those who have inherited it (I’ve written about this often before).

Subsequently, a Gallup survey in 2008 and 2009 found that the ideal income for happiness, measured as ‘day-to-day contentment’, reached a plateau at $75,000. Up until this level of income was achieved, there was a direct correlation between incremental increases in income and increases in happiness. After this point, people could acquire more ‘stuff’, but their happiness would reach a plateau.

So, this suggests that helping our children become capable to take care of their own future can be far more important than trying to leave bigger inheritance to ensure their future happiness.

The process of thinking and planning for your own death will help you understand the consequences of unfinished work, unclear arrangements and neglected communications. It will also help you discuss seemingly sensitive topics with your family members openly.

Now more than ever, you will be encouraged to ask different questions each day: Have I expressed my gratitude to those I love? Have I put in my best effort to support my children to become independent and valuable to the world? Have I supported others to become integral future leaders in our company to carry on with the mission?

Each day goes fast, and we always have unfinished business. But as we think of our own death periodically, we might do a better job today to live our lives more fully – as parents, as business leaders and as individuals trying to leave legacies we aspire to.

Death is Part of the Journey

Look around you. You might’ve grown up with some people, went to school with some people, but take the time to analyse your environment. When you remove a couple of layers of the onion, you will see that you might have nothing in common with some of those people. They are just part of your circle because life had it this way or you just wanted to fit in so you decided to stick around.

That’s why you have got to make your own moves and surround yourself with people that wants the same for you as you’re willing to wish for them. Still, remember that inside your heart, you know when you have a good friend/partner and make sure you hold on to them because they know your story and they genuinely want the best for you.

If you come from nothing and want to start something, the worst that can happen is you going back to nothing. That means start right now and stop procrastinating. A positive attitude will attract positivity, give you energy which will attract a bunch of positive people which, in return, will attract and create positive opportunities.

Be thankful for what you have instead of being mad for what you don’t have. The past will create your future and it’s better to accept where you’re from than to deny it because like Martin Luther King Jr. said,

“The arc of the moral universe is long but it bends towards justice… and no lie can live forever”.

I’m kicking off the new year being very aware of my own mortality due to the loss of some people very close to me and despite feeling sad, I feel positive as a result and plan on giving a really good account of myself this year thanks to such consideration.

Likewise, if you’d like to learn more about self-hypnosis, understand the evidence based principles of it from a scientific perspective and learn how to apply it to many areas of your life while having fun and in a safe environment and have the opportunity to test everything you learn, then come and join me for my one day seminar which does all that and more, have a read here: The Science of Self-Hypnosis Seminar. Alternatively, go grab a copy of my Science of self-hypnosis book, it’ll help you accept your mortality!