Is Virtual Reality The Future Of Therapy? 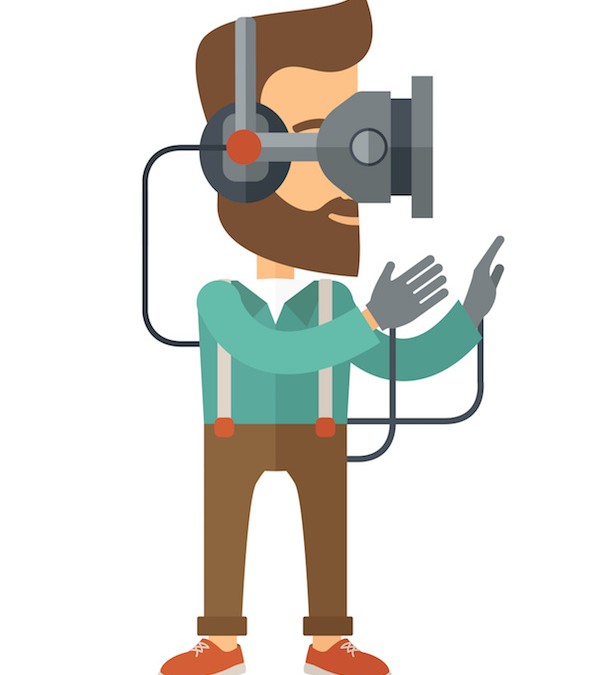 I have today been reading about a fascinating pilot study recently published in the British Journal of Psychiatry Open that was funded by the Medical Research Council here in the UK. The study is likely to pave the way for a much larger scale study exploring the potential benefits of virtual reality technology for therapeutic gain.

Let me explain the methodology that was used first of all, because it is intriguing and fascinating. This article at the BBC states that the patients in this experiment wore a headset which,

“…projected an adult version of themselves into a virtual reality mirror.
The patient was asked to mentally identify with the adult avatar, which exactly replicated the patient’s body movements, in a process known as “embodiment”.
They then noticed a separate avatar of a small crying child, who was also in the mirror.
They were told to say compassionate phrases to the child to try and comfort and console it.
Patients asked the child to think of a time when it was happy, and to think of someone who loved them.
At this stage of the experiment the roles were then reversed.
The scientists altered the headset and the patient was then embodied into the avatar of the child – which then copied the patient’s own body movements.
The participants then heard the same phrases of compassion spoken back to them from the adult avatar in the person’s own voice.”

Professor Chris Brewin, the lead author of the study said the results were promising; 9 out of the 15 participants in the study reported reduced levels of depression at the one month follow-up date and 4 of those 9 recorded “a clinically significant drop in depression severity.” The remaining 6 participants of the study noted no changes.

I really liked a couple of quotes in relation to this study by Professor Brewin:

”People who struggle with anxiety and depression can be excessively self-critical when things go wrong in their lives,” he said.
“In this study, by comforting the child and then hearing their own words back, patients are indirectly giving themselves compassion. The aim was to teach patients to be more compassionate towards themselves and less self-critical.”

This seems like a lovely way to be using technology for the benefit of those with mental health issues and I love it when technology is being applied that way. However (you knew there was a ‘however’ coming up, didn’t you?) the same process can be done and created for the same benefit without the use of virtual reality technology. In fact, this type of process already occurs in therapy rooms around the world on a regular basis.

Using the imagination, a therapy client is asked to imagine stepping into the shoes of another, or a younger version of themselves, or to step into a scene comprising of evocative imagery of some sort. This is fundamental to many established and successful forms of therapy. You NLP fans would refer to this as altering perceptual positions. A similar process can be adapted by using a Gestalt empty chair technique where the client actually moves into the roles into separate chairs facing each other and you negotiate, mediate or just communicate with the versions of oneself. In cognitive behavioural hypnotherapy there are many similar types of mental imagery techniques akin to this. There are also a bunch of processes used by regression therapists and those who use inner child techniques that resemble parts of this virtual reality scenario, but I don’t like to talk about those too much – those who have studied with me or followed my work will know my thoughts on such outdated and scientifically flawed approaches to therapy.

The beauty of using hypnosis for such a mental imagery process though is that hypnosis (and self-hypnosis in particular) has been proven to advance the quality of mental imagery (Fromm et al., 1981), this helps add to the imagined reality and is not spoon-feeding the client with the imagery.

In fact, one potential critique of this process I’d offer up is that the patients are not developing coping skills as a result of this. When engaging the imagination and not being spoonfed with a virtual reality scene to use, the patient has to put effort into the process themselves. That said, with the virtual reality, the soothing and comforting words are generated by the patient in the study and so they get to use their own language and notice the impact of it upon themselves. Those of you familiar with my favoured cognitive behavioural hypnotherapy approach will know that this very much resembles a therapeutic methodology called ‘the cognitive mood induction’ which can be used in a wide variety of ways.

Also, the type of self-compassion mentioned by Professor Brewin can be (and often is) taught to individuals for them to regularly apply without the need for entering into a virtual reality. Learning the benefits of encouraging oneself and applying self-compassion are topics I have written about on numerous occasions before and feature in my own work greatly as well as that of many other therapists of differing backgrounds.

Learn more about self-compassion:
Why is self-compassion important? And how to advance it with self-hypnosis.
Encouraging Yourself with Self-Hypnosis.

A similar critique can be offered to numerous hypnosis studies and experiments that use standardised audio recordings as the treatment component. Many researchers have referred to this as self-hypnosis, whereas I dispute if this is truly self-hypnosis. I’d be more inclined to say that listening to an audio track is hetero-hypnosis with the hypnotist not directly present. The audio still guides and spoon-feeds the client with what to do. True self-hypnosis in my opinion is developing a skill-set that can be used totally autonomously, though that subjective experience of such skills becomes tougher to measure in research experiments.

Maybe I’m missing the point. Maybe this type of virtual reality process can lead to development of skills thereafter and this study needs to simply focus on extrapolating the effects of the virtual reality in and of itself. Maybe it could be used as part of a wider and more comprehensive therapeutic programme, so I am not totally anti this type of thing until we know more. I just strongly believe and assert that all humans already have incredibly impressive virtual reality software and hardware within themselves and just need to learn how to use it effectively.

It is lovely to read that there is exploration and study into advancing mental health. When funding for research is so sparse, I’d love to see such spending on this type of technological application being offered to hypnosis researchers whereby patients learn life-skills and develop self-efficacy instead of being spoonfed scenarios. Wouldn’t that be wonderful?