Pair of Female Boobs Better At Hypnosis Than Most Hypnotists 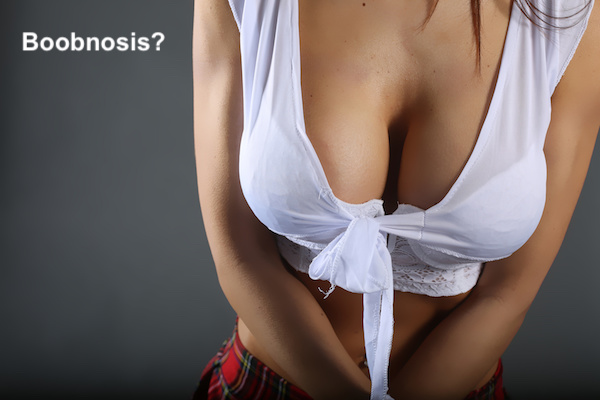 I am back after my marathon running on Sunday and will be writing about that later this week when I have all my official photos… For today, here is something I never thought I’d say on my blog… I think a large pair of boobs (female breasts) are better than most hypnotists at taking people into hypnosis… Or into any other kind of receptive, suggestible mindset for that matter.

I sincerely reckon that if you put a large pair of female breasts with a cleavage you could ski down in front of any man (and surely many women too) they’d develop a receptive hypnosis mindset far better and more effectively than most hypnotists I encounter…. Let me explain…

I have spent the past few minutes thinking of some way to humourously add the term ‘boobnosis’ to my serious blog entry today, but have failed, if anyone reading this comes up with something, please post a comment here on this blog, it’ll be greatly appreciated… Ok, on to pressing matters then… Ahem…

Where to begin with this train of thought? I had been reading some research and decided to explore further, this is what started the train of thought. Firstly, there are several evolutionary explanations for men’s visual intoxication with breasts.

Michael Lynn is a professor of consumer behaviour and marketing at the Cornell University School of Hotel Administration, (that is one heckity heck of a long title Michael has there, eh?)… In addition to this long title and prominent academic position, Michael is also (maybe) the most eminent researcher on tipping behaviour and trends (well, he is pretty much the only researcher I could find with research on boobs and tipping in the short time since I decided to write this today).

He has researched and examined a range of differing variables that affect the size of tips left by people in restaurants, cafés and hotels etc. In a recent study published in the Archives of Sexual Behavior, Professor Lynn found a positive correlation between the breast size of waitresses and the size of their tips… We could be on to something here…

His data and results suggests that bigger is always better… Well, when it comes to tipping behaviour anyway! Hmmm… So there may be something hypnotic going on here, eh?

Personally, I don’t think it’s just men. The female form finds it’s way on to the front cover of men’s and women’s magazines… If you show nude photos to women while and track their eye movements, they look at breasts too. Asked about this, females report they were looking mostly by way of comparison.

So perhaps the Western world is filled with nations hooked on bosoms and bigger ones appear to be better ones when it comes to beguiling … Or as I’d prefer to say, bigger ones seem to be more hypnosis-inducing. Especially if we examine notions of how eye-fixation functions and induces hypnosis.

Without even thinking about researching the number of breast augmentations that happen each year, I am guessing there are lots more taking place than ever before… Then there’s the breast look-alikes used to catch the buyer’s eye in advertisements going back to the 50’s. By “look-alikes” I mean any set of bilateral, symmetrical hemispheres. This would include the round, side-by-side dials on everything from washing machines to dashboards… Can you think of any other examples of breast-like imagery in advertising? Please do share it with me… Maybe someone could create a boob-shaped pendulum for poorly trained hypnotists to swing in front of their clients? I may have to get that idea off to the patent office…

Some recent research suggests that men who enjoy looking at breasts live longer. You have to wonder about how serious the investigators were but here again, it makes sense to me.

During the reign of Charles I, we are led to believe that fashionable women dressed with their naked breasts on display and that those Champagne glass’s that you used to use before flutes became fashionable were modeled upon Marie Antoinette’s breasts apparently.

So here you have two simple fatty deposits that nevertheless can be counted upon to bring great joy. When Janet Jackson or Judy Finnegan had their on-air wardrobe malfunctions, people all across the country started to go crazy in response. Yet in France, Italy and Spain, families gathered around their TV set’s watching topless contestants competing on game shows, and thought nothing of going topless on the beach… While us Brits used to get scared of rolling up a trouser leg.

But you want to know how crazy? I was watching one of those doctor shows about turning a man into a woman. So they show this guy bare-chested just before his breast augmentation. The surgeon draws circles around his nipples to suss out just where the saline pouches should be inserted. The procedure proceeds and you see lots of bloody close-ups. Finally, it’s done and there’s the same guy as before only now he has two plastic bags under this skin. Would you believe, two fuzzy circles suddenly appeared on the screen to hide the exact same nipples we saw two minutes earlier? No, I’m not making this up.

… Female breasts create furore, excitement and have people responding more sympathetically and generously… I am certain if we explored it some more, there’d be masses more evidence to demonstrate their hypnotic qualities…

So that brings me on nicely to the fact that I encounter many hypnotherapists, hypnotists and people claiming to know how to take another person into a state of hypnosis and can tell if aries and cancer mix… Yet they struggle to do anything of the sort and their learning has either been from YouTube clips, a cheap audio programme or inadequate training and the individual being hypnotised is in no state anywhere near as profound or insular as that created by having seen a pair of breasts.

I have never done this in the past (asking for comments), but I’d really like your comments on this… Who (or what) is the better at inducing hypnosis?… Boobs, or a hypnotist you’ve encountered?

Have a wonderful day 😉