Mental Imagery For Runners: The Evidence For Its Use 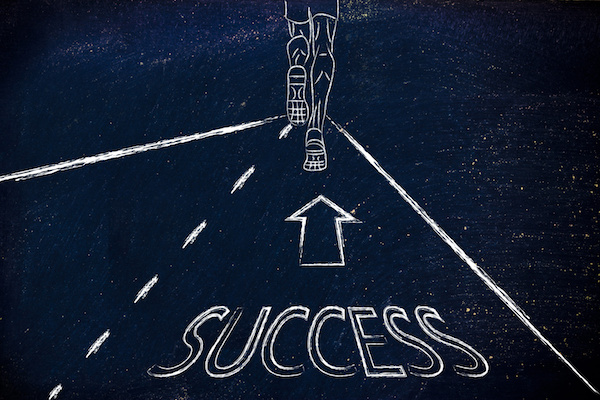 Many sports fans these days seem to know that Tiger Woods imagines his shot before he plays it. Boxers often imagine winning and knocking out their opponent. Many Olympic athletes imagine the ideal shot, goal or win before they complete it.

Early on in 2012 I imagined crossing the line at my fifth consecutive marathon, and when it happened, it was almost identical to how I had imagined it… Today, I start to write on the subject of opening up the door to our imagination to help advance our athletic performance.

What do we actually mean when we talk about mental imagery then? Murphy (1994) states that imagery is a process by which sensory experiences are stored in memory and then are recalled and performed when there is no actual external stimulus.

The runner using mental imagery in the preparation for a marathon for example, might imagine himself running powerfully and at the perfect pace. He smells the fresh air around him, hears the crowds cheering and clapping, watches other runners around him jostling and bobbing up and down. When the start gun goes off, he resists the urge to sprint too fast, keeps his cool and gets to his race pace and finds a road position with plenty of room as he gets into the zone. He feels his legs striding strongly and his arms pumping.  The senses are engaged and the mental preparation is in detail in the mind.

How exactly does using mental imagery result in gains for athletes then? There are two main theories that are adopted in the majority of the psychology literature on the subject.

Firstly, there is the psychoneuromuscular theory first written about by Jacobson (1932). This theory suggests that by imagining and mentally rehearsing an activity of some kind, the motor pattern of that activity gets duplicated, albeit less so than if actually doing the activity. If we talk in neurology terms, this neuromuscular activation is believed to develop responses in the motor cortex of the brain. This has been referred to as muscle memory by many authors since Vealey and Greenleaf (1998) coined the term.

A 1972 study by Suinn examined the activity of muscles in skiers legs while they imagined skiing downhill. When they imagined it, the electrical patterns in those muscles was almost the same as if they had actually been skiing downhill. Since then though, attempts to replicate support for this theory have fallen a bit short. Some evidence has suggested that this theory is not consistent across all kinds of muscular activity, with higher levels of activity being more likely to respond to the imagination (Feltz and Landers, 1983).

The other main theory of mental imagery and how it works is that of symbolic learning theory first explored by Sackett (1934). This theory suggests that imagery effects are actually more to do with the athlete having the opportunity to practice symbolic aspects of a motor activity rather than actually activating the muscles.

This theory then suggests that the mental imagery forges a so-called “mental blueprint” which the athlete uses when performing.

There are number of other theories and alternative notions for how mental imagery is effective, but knowing those theories are not really going to benefit a runner any more than that which I have mentioned already. Some theories contend imagery helps us believe we are capable, and thus advances our belief in ourselves and our ability to master our sport. Other theories suggest that we are prepared for more eventualities as a result of having imagined them, others believe of a somatic response to the imagery which prepares us for the event and helps motivate us by imagining how it feels when we succeed and yet other theories believe our skill levels are enhanced by mental imagery in a variety of ways. Some mental imagery processes are believed to help advance cognitive processes when performing by mentally rehearsing and all of these notions are prevalent within the field of therapy that I work in and I see the benefits of these things on a daily basis.

There are a number of ways in which athletes can use mental imagery techniques, and not just for mental rehearsal. Many athletes successfully use mental imagery for the development of skills (runners can mentally imagine their technique, for example), for the development of cognitive strategies (mentally rehearsing how you use your cognitive strategies when actually running), building the healthiest levels of motivation for races and training as well as developing mental resilience (overcoming adversity, being persistent etc).

Next up, I am going to share with you a guide for how to get the very most from mental imagery use if you are a runner or an athlete or sports person of any kind.

Hardy, L., & Callow, N. (1999). Efficacy of external and internal visual imagery perspectives for the enhancement of performance on tasks in which form is important. Journal of Sport and Exercise Psychology, 32, 95-112.

Sackett, R. S. (1934). The influences of symbolic rehearsal upon the retention of a maze habit. Journal of General Psychology.