A Media Attempt To Cause A Controversy Where It Does Not Exist, and The Virtue of Boredom 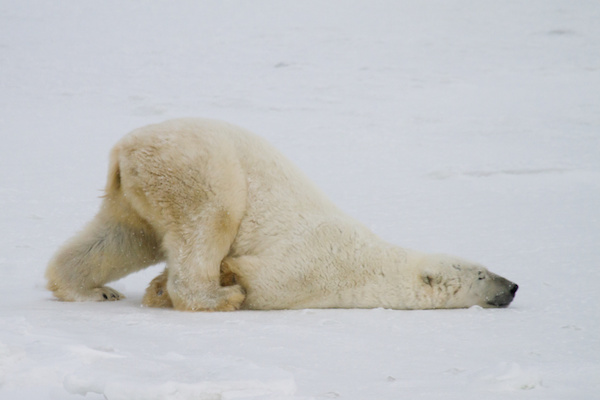 In the news this morning has been one of those media stories whereby newspapers are desperate to make out that a huge issue exists where it really does not.

Yes indeed, instead of making reference to the US Presidential race, the corruption being uncovered in English football or the very poor choices made by Sharon Osborne regarding her final three in the latest series of X-Factor, I am referring to a story that the Telegraph headlined “Parents’ outrage over school ban on running in playground”, ITV news have titled “School bans children from running in the playground” and the Daily Mail, typically, headline it as follows; “Primary school outlaws RUNNING in the playground: Parents demand ‘let kids be kids’ but headmaster says ban has led to ‘30% drop in first aid incidents’ and pupils can DANCE instead.”

The headlines really tell you what the stopry is about. A headmaster in a bid to reduce the number of pupil injuries has introduced some activities for pupils to do during play times at school, and in some of those areas where those activities are done, there is to be no running. It’s a more sophisticated plan though, as you’ll read shortly….

The media have jumped on to the story in frenzied fashion, desperate to make it some sort of crazy madcap initiative by a loony headmaster, the same way that in the late 1980s the Conservative Party and the British media started referring to the Labour Party as the ‘loony left’ and highlighting very slanted and biased stories of their policies of political correctness in action. This included very biased coverage of a story whereby school’s were banning the singing of Baa-Baa-Black sheep and so on. I digress perhaps, but this story had a similar feel of the media attempting to colour the perception of the audience regarding this story rather than just reporting it factually.

The Headmaster at the centre of this story was interviewed on Radio Five this morning as I headed back home from my run while it was still dark. Firstly, presenter Chris Warburton introduced the story by saying “we’ve got a story now that I’m sure is going to see us getting loads of text messages from listeners” so he framed the section in such a way that the audience was primed to respond in a particular way. The Headmaster came onto the show and very pleasantly and intelligently explained the reality of what was happening at his school.

Far from being a case of “health and safety gone mad” as ITV news claimed, the school had not banned running, just asked that students stop running in some of the areas where new initiatives had been brought in for pupils to be able to do quieter, less lively activities. The school had encountered plenty of injuries during break times previously, and found that pupils sometimes got frustrated and bored by the end of the breaks and so the school brought in some activities such a giant Jenga, Lego, designated reading areas, Karaoke and dancing areas (why was this not around when I was at school??) and areas for other games, and still allowed for running in many other areas of the playgrounds and play areas.

It all sounded great to me to be honest. I have first hand experience of how school playgrounds can be when plenty of school children are running riot on them, and they can be hazardous for some, especially anyone getting in the way of the child-plough-wrecking-machine-Sprinting-Tasmanian-Devil that is my son! I mean just look at this hell-raising mob….. 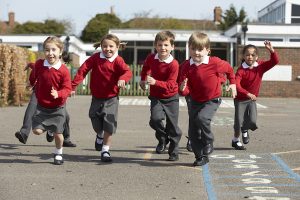 Continuing with the interview of the Headmaster Dr Tim Cook, the other presenter on the radio Rachel Burden, was desperate to find some controversy in this story and probed away looking at some way of finding a crack of vulnerability to shove a wedge in, or some way the headmaster could be perceived as being crazed or ‘loony’ but his sobriety, kindness and thoughtfulness rendered her attempts impotent. I was pleased for him and annoyed with the presenters of the show to be honest.

The one thing I may have taken issue with though, is the notion that it is always a bad thing if children get bored. I know the old adage ‘the Devil makes work for idle hands’ and all that, however, there is pretty strong evidence to suggest there is some virtue and benefit with experiencing boredom on occasion.

My own children have school, and then afterwards they have tae-kwon-do classes, ballet (and acro dance) classes, football classes, swimming classes, and during the holidays my wife arranges so many activities, and we do lots as a family during weekends. However, we certainly are not afraid of letting the children get bored once in a while and in fact, we encourage it when we feel it would benefit the children.

Psychologists tend to support this notion.

In this article at the BBC, Dr Teresa Belton suggested that cultural expectations that children should be constantly active could hamper the development of their imagination.

Dr Belton, Senior researcher at the University of East Anglia’s School of Education and Lifelong Learning interviewed a number of authors, artists and scientists in her exploration of the effects of boredom and highlighted how author Meera Syal, for example, had benefited from boredom: “Lack of things to do spurred her to talk to people she would not otherwise have engaged with and to try activities she would not, under other circumstances, have experienced, such as talking to elderly neighbours and learning to bake cakes.

“Boredom is often associated with solitude and Syal spent hours of her early life staring out of the window across fields and woods, watching the changing weather and seasons.

“But importantly boredom made her write. She kept a diary from a young age, filling it with observations, short stories, poems, and diatribe. And she attributes these early beginnings to becoming a writer late in life.”

The article is a good read and also stated;

Dr Belton, who is an expert in the impact of emotions on behaviour and learning, said boredom could be an “uncomfortable feeling” and that society had “developed an expectation of being constantly occupied and constantly stimulated”.

London child psychologist Lyn Fry states “Your role as a parent is to prepare children to take their place in society. Being an adult means occupying yourself and filling up your leisure time in a way that will make you happy. If parents spend all their time filling up their child’s spare time, then the child’s never going to learn to do this for themselves.”

In this article at the Daily Telegraph, a study on boredom was highlighted.

Dr Sandi Mann, from the University of Central Lancashire, asked students to find creative uses for two polystyrene cups to test their levels of creativity.

Before the experiment she asked one group to carry out the humdrum task of copying phone numbers from a telephone directly.

Dr Mann discovered that those who carried out the boring telephone task found far more uses for the cups than the control group.

“Boredom is a fascinating emotion because it is seen as so negative yet it is such a motivating force,” she said,

“I am also acutely aware that being bored is not the bad thing everyone makes it out to be. It is good to be bored sometimes! I think up so many ideas when I am commuting to and from work – this would be dead time, but thanks to the boredom it induces, come up with all sorts of projects.”

She believes that parents should allow their children to experience boredom so that they can learn to create their own entertainment.

“Unlike so many parents today, I am quite happy when my kids whine that they are bored,” she said: “Finding ways to amuse themselves is an important skill.”

Dr Wijnand van Tilburg, a psychologist from University of Southampton also believes that boredom can be beneficial.

“Generally speaking, boredom feels unpleasant, and it involves feeling restless and unchallenged at the same time,” he said.

“In our research we have found that boredom fulfills an important function: boredom makes people keen to engage in activities that they find more meaningful than those at hand.

“Essentially, the unpleasant sensation of boredom “reminds” people that there are more important matters attend to than those at hand.’

The previously mentioned Dr. Teresa Belton, also told the BBC that boredom is crucial for developing “internal stimulus,” which then allows true creativity. Thus, operating under the notion that children should be constantly active could hamper the development of their imagination. 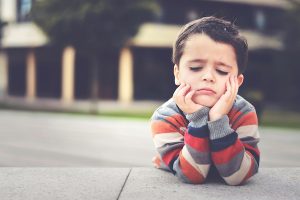 The popular belief that boredom is bad and potentially detrimental may be due to bad press and outdated studies which have previously suggested that people with “boredom proneness” lack excitement and are easily frustrated. But recent research finds that being bored promotes creative association and pushes one to find deeper meaning and satisfaction.

For example, do go and read this article entitled The exciting side of boredom by Ella Rhodes in the British Psychological Society’s Psychologist publication, in the article she meets psychologists who think boredom has had a bad press.

You may also want to give the evidence some exploration of your own.

So I started out being simply a bit miffed at the media for the way they were demonising what seemed like a very understandable and intelligent initiative by a seemingly lovely headmaster of a school in the West Country in England, and I ended up thinking that perhaps we can all happily permit our children to get bored from time to time, knowing that it may even be doing them some good to find ways of amusing themselves.

There you go, that’s it today…. I’ll be back soon.