This Sunday is the London marathon and I shall be watching with some slight envy of all the runners who are competing in it as it really is a favourite event of mine and I love the atmosphere of it all. One thing that continues to impress me about the event is the amount of money it raises for charity and this year, the official sponsor for the London marathon is Heads Together, a charitable organisation aiming to tackle the stigma, raise awareness and provide help for people with mental health challenges.

The organisation comprises of a team of charity partners that cover a wide range of mental health issues that are close to the passions of Prince William and his wife the Duchess of Cambridge as well as Prince Harry, including the charity MIND that I have had plenty of involvement with in the past, running London marathon for them back in 2012 myself. Here I am crossing the line in my MIND vest that year: 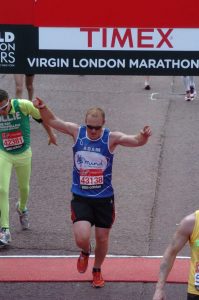 Both Prince William and Prince Harry have spoken this week about their own struggles in dealing with the death of their mother back in 1997.

Prince Harry revealed that he sought counselling after spending nearly 20 years “not thinking” about the death of his mother, Diana, Princess of Wales.

In the media interview, he said it was not until his late 20s that he processed the grief – after two years of “total chaos” and coming close to a “complete breakdown“. But he was in a “good place” because of the “process I have been through”.

The article states that Prince Harry decided to talk about his past in the hope it would encourage people to break the stigma surrounding mental health issues. I think this is wonderful, especially when you see the other high profile individuals that are also speaking out as part of their project.

Speaking to the Telegraph’s Bryony Gordon, Prince Harry said: “I can safely say that losing my mum at the age of 12, and therefore shutting down all of my emotions for the last 20 years, has had a quite serious effect on not only my personal life but my work as well.”

He added: “I have probably been very close to a complete breakdown on numerous occasions when all sorts of grief and all sorts of lies and misconceptions and everything are coming to you from every angle.”

To hear this from such a senior member of the royal family is incredibly rare and I wanted to join in with the seemingly universal praise he has received as a result of speaking out.

Typically, we think of the Royal Family as the ultimate embodiment of the British stiff-upper-lip approach to life. Yet this week, Prince William spoke out about the notion of a British stiff upper lip being problematic.

He said he wanted his children to grow up able to express their feelings. He told the Calm charity that while there might be a time and a place for the “stiff upper lip”, it should not be at the expense of people’s health. Very well said Prince William.

The Prince’s follow in the footsteps of their own mother, Diana, Princess of Wales who in a 1995 BBC Panorama interview, told Martin Bashir about her post-natal depression, her self-harming and her bulimia.

The privileged life that they lead certainly has not protected any of them from the challenges of mental illness and I think tis up-front display of honesty from them both can only be good in breaking the taboo that still surrounds mental health.

One of the things I find incredibly encouraging too, is the way they promote the notion of simply being able to be heard and to express themselves in a safe environment. I spend a lot of time with hypnotherapists and other types of therapists who are often looking for the best techniques and strategies to apply, yet I think we can all recognise the importance of simply listening and developing a good quality therapeutic alliance that permits someone to feel safe and assured and able to express themselves freely and honestly.

I do not have much more to say other than I wanted to continue to share the message and the importance of this candour and hopefully help continue to reduce the stigma and raise the awareness of mental health issues and assure people that there are solutions out there. 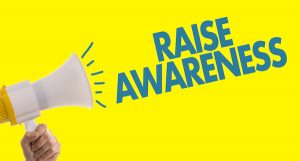