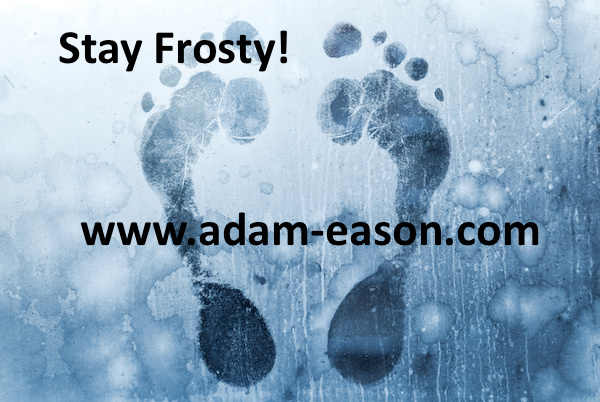 Back in 2010, I watched a brilliant TV series (brilliant in my opinion), based on a true story about the US marines that were sent into Iraq to spearhead the invasion aimed at toppling the regime. The series was called Generation Kill.

In the show, Sgt. Brad Colbert played by Alexander Skarsgård (also plays Eric in True Blood) was known as the Iceman, but he also coined a phrase that became the tagline for the entire series. Whenever they were going out on scouting missions, or going into battle, or on a recon mission into a town they knew contained opposition fighters, he would say to his team the words “stay frosty.”

This term was about remaining cool and calm, but most importantly to keep alert and stay on your toes, so to speak.

Today’s self-hypnosis technique is all about how to ‘stay frosty’ and building upon my last blog entry,  we are using self-hypnosis to keep alert and on our toes instead of turning ourselves into zombies which many people have come to associate with hypnosis.

Many people have made an association between relaxation and hypnosis, some hypnotherapists I encounter only know how to induce hypnosis by using relaxation methodologies, yet hypnosis can be induced and the individual can be given suggestions to remain alert, very awake, with a high degree of focus and still respond brilliantly to the hypnotic suggestions.

In fact, in 1991, Banyai wrote a contribution to the book Theories of Hypnosis: Current models and perspectives edited by Lynn & Rhue (1991), entitled Toward a social-psychobiological model of hypnosis. In this Banyai wrote about inhibiting the individuals ability to relax by having them exercise rigorously prior to hypnosis, often by having the individuals riding stationery bicycles – they were still responsive to hypnosis.

In my second year of University, I lived and studied in Finland for 6 months. My mother is Norwegian and so I have a lot of love for Scandinavia in general. I attended the University of Tampere and lived in the city that was twinned with Manchester University that I attended. The city ports looked very similar to parts of Manchester too. Part of Finnish life is the sauna. Every home and building has its own sauna and the health benefits are considered important to all local people. Even my student accommodation had its own sauna facilities.

At one of the international students association’s gatherings, we were taken to a sauna out in the Forest on the edge of the city, which could only be reached by walking (an hour walk) to a cabin by a frozen lake. We enjoyed the sauna there, and they had a real-life ice cutter that cut into the frozen lake (like you see on cartoons) to remove the ice and reveal wooden steps. We then would step out of the sauna, jump into the frozen lake and climb out again.

The initial sensation of entering the frozen water in a forest where the temperature was minus 20 degrees in the middle of January (it was actually deemed a mild evening) was literally breath taking. I could not breathe. My breath vanished, it scarpered, my body shook and I scampered to the steps and climbed out.

The funny thing was, that because it was so cold, but our core temperature was so hot from the sauna, we then stood outside in a forest, in the glow of the cabin, completely naked, drinking beer and chatting as if it was totally normal… The freezing water dip did nothing for making an impressive display out of your manly parts either.

So today’s process is going to be combining some of these ideas and has inspired me to develop a process using hypnosis for alertness that I have seen suggested in a number of other places.

Induce hypnosis. You can do so by any means you desire or know of. You can use the process in my Science of self-hypnosis book, use the free audio we give away on this website to practice or have a look at the following articles as and when you need them; they are basic processes to help you simply open the door of your mind:

Imagine being in a shower room with your favorit type of shower head. It can be a dream shower room, or one you have actually been to before. Engage your imagination, take all the time necessary to be in this place.

Notice the colours, shades of light and details of this place. Hear the sounds and notice how sounds travel in this space when you make any sounds.

Feel comfortable here and imagine reaching deeper inside your mind as you create this perfect shower room for you.

When you have really engaged with this environment, then move on to the next step.

As you are imagining and anticipating, at the moment you least expect it, the icy cold water fires out and down upon you. It is not a gentle shower, but a hard and fast shower bolting water down upon you, like standing underneath a mountain side waterfall.

Notice how your skin reacts and notice the way your breath reacts as it pours down upon you. Notice the effect it has on your senses.

As and when you feel enlivened, imagine stepping forward, out of the water as it falls, step forward and shake your body to get some of the water off and move on to the next step.

As you step forward and out of the water, as you shake your body, the floor falls away from you suddenly, safely and you plunge straight into an ice pool.

As you drop into the water, notice how it takes your breath away, notice the initial ‘gasp’ as the effect it has upon your entire body as you are temporarily completely immersed in icy cold water.

As your head comes up and out of the water, you catch your breath. Find the steps easily as you reach out in front of you and climb out, noticing your breathing sending oxygen throughout your body, invigorating you and bringing your senses to life.

As you climb out, feeling more invigorated and comfortable with each step, move on to the next step.

Imagine the feelings flowing through your body now, notice your mind being alert, your senses tuned in, then take a couple more energizing, alterness enhancing breaths, open your eyes and bring this session to an end.

Stretch your limbs out, a couple more deeper breaths and go about your day, filled with a level of focus and alertness that is going to serve you wonderfully well in your day.

There you have it.