I Love The Olympics!

On this Monday morning, one of the many things to be wonderfully happy about here in Great Britain, is the current Olympic Medal table. For a small island nation that we are here, with a fraction of the population of the US, China, Russia (though the Russians have a much depleted team at this Olympics), we really are awesome at doing Olympic stuff! Here is how things stand as of 9am today:

For each and every Olympic gold, silver or bronze medal we have won, there has been an incredible story underpinning it. All of them have such dedication to the way they set their sights on achievement, then plan meticulously, train incredibly hard and diligently for years, making sacrifices along the way. I have read about all the individuals as much as possible, watched their interviews, and been really in awe of their Olympic accomplishments.

Yesterday’s ‘Sensational Sunday’ was even better than London 2012’s ‘Super Saturday’ in my book, with a 5 gold medal haul coming from a very wide range of sports.

At the same time, the Premiership football league action begun again this weekend, and I found it really hard to get interested. The differences between premiership football (and national football) and the Olympic games have never seemed so numerous to me, and the wide gap between the way they are conducted is incredible. Footballers with huge salaries, unbelievable transfer fees, their lifestyles, they way they dive and roll around on the pitch (did you see the gymnast who snapped his leg during this Olympics? Can you imagine a footballer being as calm as he was? Or smiling and walking around with a frame the next day as he was?), the way the fans conduct themselves, the sentiment towards opposing fans and oh so much more I could go on about.

Yet here in the Olympics, I was actually really happy for Fiji when they beat us in the rugby final – it meant so much for their nation. Their first ever Olympic medal. And I wanted the Dutch cyclist Laurine van Riessen to do well in the keirin event after she had scaled the wall of the velodrome in spectacular fashion. Of course, I cheered on Usain Bolt because he is so utterly wonderful and I applauded the downright brilliance of Michael Phelps as he won more gold medals to add to his treasure chest filled with them! (and by the way, if David Icke ever did want me to take his claims seriously, those about the Queen and other prominent figures being alien beings controlling the world, I’d be much more inclined to believe him if he started pointing the finger at Michael Phelps instead, the guy’s a machine!) 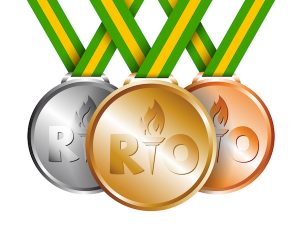 There’s been far too much to write about in a single blog entry, and so much that has been great entertainment as well as being inspiring and offering so much for us all to learn from.

This weekend, when I was not sleeping, I was outdoors. It was amazing weather, we were at our own beach hut with family on Saturday and then spent the day over in the spectacularly beautiful Studland at Knoll Beach on Sunday with friends of ours. We spent hours in the sea with the children body boarding, swimming, and on our paddle boards; we had a great time. Those of you that follow my running blog know that I have been injured for the past 4 months and am only just back training. My legs were aching on both mornings this weekend, but the inspiration of the Olympics has really motivated me and ensured that I was out running before my children were up each morning.

I genuinely do believe that the Olympic games inspire generations. Many of this Olympic games’ medal winners have said they watched previous Olympic games and dreamed of being involved themselves, or dreamed of winning medals. Watching people who converted dreams into reality is just wonderful, isn’t it? I have wanted my children to watch plenty of it, and to get excited by it too, and really look forward to the next Olympics where they’ll be a bit older and more able to understand it all. And while the Olympics are in South America, they have to be in bed asleep while I am cheering on my running hero Mo Farah in the 10,000m race in the early hours!

I’ve felt wonderfully motivated by it, and it has been heart-warming, exciting and is a proper celebration of so much I love about life. What’s more…. It’s not even over yet!

Just wanted to say that today…. And I’ll leave you with this, which encapsulates how I feel right now….