Why Did I Bother Watching Aeroplanes Last Weekend? 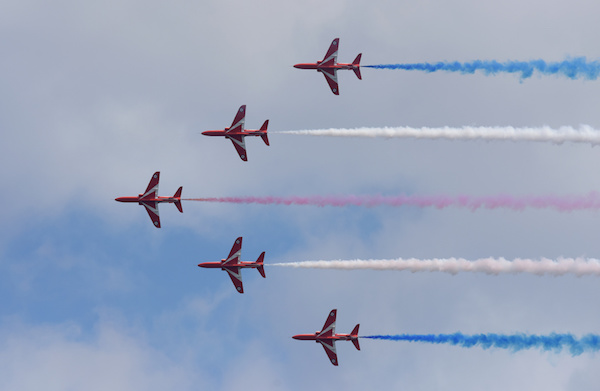 A friend of mine said this to me yesterday; “why would you spend days watching aeroplanes?” after I had told him that I had been at Bournemouth air show this weekend.

I did not just go to the air show with my family and friends, but on one of the days, me, my wife and children all bundled into our van, parked up at the Flying Club cafe and watched the Red Arrows taking off from Bournemouth airport. We then watched them land too, we then drove around the back of the airport to see where they parked, watched the teams of engineers setting about the planes, the pilots disembarking and coming over to say hello! It was wonderful, the children loved it! Here they are, up close, watching the red arrows preparing for take off. 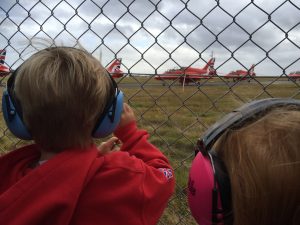 Ever since my wife and I have had children, we have attended the Bournemouth air show. We stake out at our beach hut, we follow the schedule in the programme and we cheer at the planes. We actually go down onto the beach and watch them flying overhead, it is amazing.

For me, simply hanging out on the beach is enough. I’ve written before about my love for Beach Life. When acrobatic, death-defying planes are there too, it’s even more wonderful for a few days.

The Red Arrows in particular are incredible. Such great entertainment. If you’ve never seen them, I highly recommend them. Nine bright red planes flying in formation with different colour smoke coming out the back of them at different times, and they do some very exciting stunts. 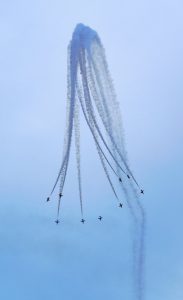 They even do a love heart in the sky, which my 3 year old daughter was particularly impressed with….. 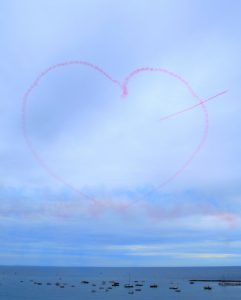 Another highlight for me and my children was watching the Typhoon fly past, with it’s burners glowing and filled with flames at the back as it sped at over 1500mph above the sea edge. It is magnificent. 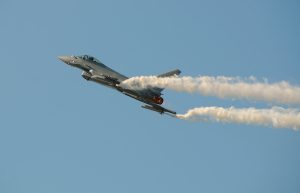 Luckily, we are very well equipped with ear defenders here, as you can see, here are my two with their older cousin watching some of the earlier planes from the step of our beach hut before we watched the rest on the beach….. 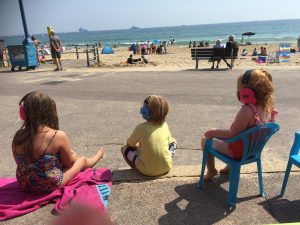 Then there are also the beloved older planes such as the Sally B and the Lancaster bombers which seem to be going in slow motion across the sky and you can’t help but wonder how on earth they actually stay in the sky. Last year we saw the final flight of the much loved Vulcan (although my children refer to it as ‘the bacon’) which was even bigger and baffled me even more how it actually flew, and the growling noise it made was incredible.

Despite all of this, I am not usually really into planes, I do not know much about them to be honest. When we were over watching the planes taking off on Saturday evening, I was stood beside a guy with one heckity heck of a long camera lens (he could be Paparazzi with it, I’m telling you) and he was telling me about how winds effect landing positions and all kinds of things that I never knew and I passed on to my friends and family the next day – though few were actually quite as interested as I was. I love meeting people who are geeky about their loves and pet subjects though, don’t you?

Anyway, the sheer entertainment factor of the air show was wonderful, and if they are doing right on your own home beach, right above your beach hut, why on earth would you not go and watch it. At times, we could see the underbelly of the planes as they circled back towards the pier, it is such a great view.

The reason though, that I protested so much at my friend’s comment yesterday (“why would you spend days watching aeroplanes?”) was not just because as a family we love being at the beach, being visited by loads of friends and family, eating, drinking and watching the great entertainment in the sky, but actually much more than that:

1. The very idea of humans flying is exciting and wonderful isn’t it? I mean we can travel pretty much anywhere on the planet in quick time these days as a result of flying. We are unable to fly ourselves (though admittedly, we sometimes believe we can) but have the ingenuity to create machines that fly.

2. The pilots are a great example of diligence and dedication in so many ways. They have to train mentally, physically, emotionally to be pilots. They have massive responsibility on their shoulders and they have huge demands placed upon them when flying.

3. When my children say “wow!” or “look at that plane going upside down Dad!” I get excited too. I love to see my children and my friends children all in awe and excited about the planes.

4. As I said, I do not know much about planes and typically I do not spend time watching them, reading about them or getting to know anything about them, and so I think getting excited about them once a year at a massive organised event such as this adds some diversity and stimulation that is very welcome in my life.

Flying as a concept interests me, I could have fed metaphor upon metaphor into this article at the ways in which an air show like this effects and influences me, but I’ve saved most of that stuff for my children and have been using it as a means of setting great examples to them on a number of levels, and I’ve been taking many of those messages on board myself too.

That’s what has been happening here. Will be back very soon.