Hypnosis for Running into 2015

From my Hypnosis for Running blog:

Happy New Year! Hypnosis for running is charged and motoring full steam ahead for 2015.

Back in 2012 I ran five marathons in succession, getting personal best times at two of the events. Since then, my running progress has stuttered somewhat. A combination of injuries, illness, becoming a Father twice in quick succession all hampered my ability to run as I had done for the previous decade.

Last September I started preparing for 2015. I set goals for my Spring marathons and have a few other major running events that will need plenty of training a focus. As you may have read here previously, I looked at how I ate and joined the growing throng of low carb high fat runners. I examined my running stance, biomechanics and style. I bought plenty of new gear, and I started getting the miles in the bank.

My weight has reduced by one and a half stone since then. I ran a lot of miles at a very slow pace to round off 2014. Then on the 29th of December, with 17 weeks to go until London Marathon, my schedule began.

Here is what I ran last week:

My training plan (especially as you see it take shape in the coming weeks) will be familiar to those of you who have ever run a marathon. Monday’s are recovery run days, Tuesday’s are efforts/intervals, Wednesday is for the second longest run of the week at threshold pace, Thursday’s tend to be hills or intervals, Friday is my rest day, Saturday is a limber up run (or Parkrun whenever my family/work/life schedule permits) before my Sunday long run.

My aim was to get a couple of 20 milers under my belt at the end of last year, and even though they were very slowly run, I feel a lot more capable of upping my pace now that I have begun my 16 week schedule. Yesterday’s 12 miler felt easy and relaxed mostly; just a couple of major Bournemouth hills to deal with that pulled my pace downwards. I used to get concerned at such when gazing at my stats on Garmin connect, but if my heart rate was up during that part of the run, it was all part of a good workout. Heck, I’ll end up stronger on the flat surfaces, right?

For those of you wishing to follow my running, I can be found on Strava. Otherwise, I’ll  add Garmin connect stats and maps of key runs here each week. For those of you that are runners (or cyclists or swimmers) you can join Jantastic for free, it is a great way to get motivated and support your fellow runners, set goals and so on. If you are also into hypnosis, then why not join my own Hypno Runners team, when you sign up at Jantastic, simply track down our team (search for the name ‘Hypno Runners’) and join us, simple as that. I have logged my first run already this morning, but you have until next week to register and then log this weeks workouts, so it is not too late to join.

That is what happens in the first week of the New Year, everyone is pumped and determined, so let’s ride that wave for now and deal with any flagging later on….

Of course though, you don’t come here for just the real, actual, physiological stuff about running. We are all about the mental game, the psychological stuff, and how it can all be used to advance running (or any endurance sport) performance.

Therefore, in coming days and weeks, I have many psychological techniques and self-hypnosis strategies to help you in a variety of ways. The techniques that I have been testing and working on including using self-hypnosis to help with your breathing, your motivation, dealing with the elements of Winter and much more besides, so keep tuned for those each week.

As of today and until the next batch of Spring time marathons need to be run though, I’ll be here logging my previous week’s miles each Monday.

Happy running and I’ll be back with more later this week…. Onwards and upwards we go…. 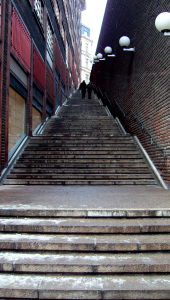