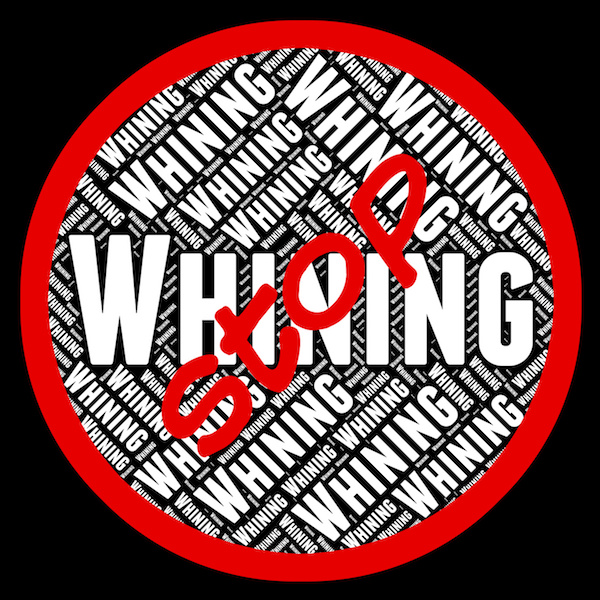 I wrote about this subject in my zine a couple of weeks ago. One of the things I noticed when I logged into Facebook and twitter over the New Year period was the amount of whining that went on. The sheer volume of people that were writing about how awful 2014 had been was incredible to me. I was staggered at how many people were citing all the things that they disliked about 2014 and how it had been an awful year and gave an air of being powerless to it all. Like the year happened TO them. Like they were passive recipients to the year that happened.

I am not one to just ignore anything bad that happened, but in every year we can find something that is laudable and that can be celebrated in an appropriate fashion. We can be honest about our year of course, and there is no need to try to disillusion ourselves that things were great if they were not, but the whining about it is something that may actually kick off the new year in a very bad way for your mental health and emotional well-being. Let me explain…

We can all complain, but learn to complain in an effective way. In a solution focused way at least. Recognise that there is a great difference from complaining effectively and just whining in a way that could be detrimental to our health and make us rather unpleasant to be around.

Effective complaining requires us to voice fair and legitimate dissatisfaction while actively seeking and aiming for a resolution of some kind. By voicing legitimate dissatisfaction without that desired outcome of a healthy resolution, we are merely venting. Effective complaining looks for a resolution, whining is just incessant venting. Often with whining, there’s no reason or purpose to it. The distinction is significant because complaining, venting, and whining, have very different effects on our psychological and emotional well-being.

We all complain many times a day to our families, friends, colleagues, taxi drivers, Facebook connections and even strangers at the shopping checkout. Many of us seem to be unaware that the way we voice our complaints can effect our mental health and emotional well-being.

Despite many people’s seeming reluctance to complain, (especially here in England where polite, ‘stiff upper lippedness’ is how we are characterised) the truth is that people complain today more than ever. Does complaining help us get what we want or what will make us happier though? Often, complainers tend to find themselves repeating the same complaints, grievances and dissatisfaction to one person after the other as they attempt to vent and be free of the frustration. Usually though, by repeating the complaint, we are simply reliving the frustration and the grievance all over again and perhaps making us feel worse as a result.

Research shows that when people are dissatisfied with a product, 95% of them fail to complain to the company or retailer because of fear that doing so will be annoying and time consuming, and those people often believe they will not get the outcome they want by complaining. Likewise, people generally tend to avoid complaining directly to our loved ones. The fear is that voicing such complaints only leads to arguments and does not resolve anything. Instead, many reach for the phone to call friends and vent to them, or go out with friends and vent to them, or vent their thoughts and feelings on Facebook and other social media outlets. Such is the brief means of communicating with social media that the complexity of issues are often missed, and others can misunderstand and misinterpret.

There are so many things people complain about each day; the weather, public services, levels of traffic, our partner, our children, our friends, work colleagues, films you disliked, TV shows featuring annoying people, poor customer service, poor products, news items, government, politics, rival hypnotherapy schools doing a disservice to the field (I think that’s just me) and the list goes on and on.

Here’s the thing…. When we feel powerless in the face of so much dissatisfaction and frustration, we are left feeling without support, without hope, like a victim; we feel bad about ourselves. A single, isolated incident won’t effect our mental health in a negative way, but with so much ongoing whining building up day upon day, it can lead to frustration and helplessness that impacts our mood, our self-esteem, and even our general mental health. Much of which also tends to lead to more whining!

Yet in the past when we have effectively resolved an issue, or healthily voiced a complaint to your partner that led to an advancement of your relationship, that solution focused complaint with a healthy outcome led you to feeling good about yourself, didn’t it? It beneficially effected your life.

Just as whining may negatively effect our emotional well-being and mental health, complaining effectively and achieving effective resolutions can be incredibly empowering and it can affect our mood and self-esteem for the better. Further, learning to complain effectively to our loved ones will do wonders for our relationships.

All it takes to turn pointless whining into complaints that solve problems and create change is to learn the tools and techniques to complain effectively. Many of the articles that I share here in Adam Up do that and there are many more on my blog or that are written by other authors out there in the world.

Effective complaining can also be fun, even hilarious and tantalising at times! Effective complaining is the ability to share our raw truth, express deep sincere feelings, be vulnerable and share with those you love or who you value. It is about embracing those inner feelings and trying to figure them out, so you can create a beneficial and satisfactory resolution.

Some people do not realise they are whining incessantly. A great way to actually work it out is to use a mental imagery process. Evidence tends to suggest that mental imagery is made more vivid with the aid of self-hypnosis and it helps focus the process, so follow these simple steps:

Prior to beginning, think about a recent occasion that you complained or voiced issues to a friend, colleague or on an online social media network of some kind. Where you moaned, or whined, or shared a grievance of some kind with an audience (could be a single person). With that in mind proceed with the steps as follows.

You can do so by any means you desire or know of. You can use the process in my ‘Science of self-hypnosis’ book, use the free audio we give away on this website to practice or have a look at the following articles as and when you need them; they are basic processes to help you simply open the door of your mind:

Once you have induced hypnosis, move on to step two.

Recall the occasion you made the complaint. Imagine being in that same situation, see the sights, hear the sounds, feel the feelings and immerse yourself in that situation as well as you can. Tell yourself that every thought, feeling and image serves to deepen your hypnotic experience.

With that scene vivid in your imagination and with you feeling as if you are really there, move on to the next step.

Now run through and make that complaint again. Re-enact it as closely to the same way as you possibly can. Live through it and experience yourself making that complaint.

Once you have re-enacted that as vividly as possible, move on to step four.

Imagine stepping out of your body and leaving it there in that place. Now step into the shoes of another person, someone who saw or heard your complaint. When I say step into their shoes, I mean, really be them. BE them. Think as they do, see the world through their eyes, hear with their ears, feel with their heart, from their gut.

Now watch, hear or see the complaint being made (by you) by ‘that person’ (that’s you, that is). React as this new person who is experiencing your complaint. React as that person reacted there and then. Be as objective and honest as you possibly can – if you are properly in their shoes, you’ll not need to try very hard, because you’ll be reacting as them.

Engage in that and once you have truly experienced the complaint from this person’s perspective, move on to step five.

Now bring all that reaction, insight and perspective with you as you float back into your own body.

Reflect upon what you have witnessed.

Did you perceive that you were whining? Did you think the complaint was made effectively? Did the complaint show any signs of of being solution focused? Was the complaint a powerless plea, or a futile sounding off? Was it annoying, frustrating, or was it useful in any way?

Reflect objectively and inform yourself accurately about the way you complained. Then make a decision about how you’ll choose to communicate yourself in the future and how you’ll strive to take action towards your complaints in the future. Reflect upon how doing so will contribute to your better mental health.

Exit hypnosis. If you follow the protocol in my books, count yourself up and out from one through to five. However, if you open your eyes, wiggle you fingers and toes, take a few deep breaths and orient yourself, that’ll be fine.

The next time you decide to whine on Facebook, or are about to call a friend to vent about something that frustrated you, ask yourself if it is something you would like to change. If so, consider skipping the whining and taking positive, solution focused action to complain effectively with the aim of creating a solution and making your life, mental health and emotional well-being all the better for it.